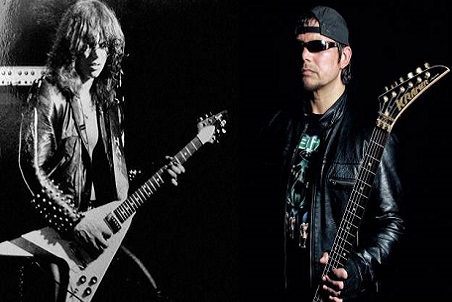 Dead Rhetoric: With Mercyful Fate being inactive for the last 15 or 16 years, and doing Force of Evil for a bit, did you miss being in a band?

Shermann: Along the way, I always had small projects. The first one started when we had some off time with Mercyful Fate in ’96, I created a band called Gutrix, which was 70s hard rock/heavy metal, just to take advantage of the time rather than sitting on the couch. Maybe it’s a good thing, maybe it’s a bad thing. If I’m a fan of AC/DC or Judas Priest, I would rather see the band only be in the band than having all sorts of side projects, but unfortunately, many people have a lot of side projects in order to survive. If you’re dedicated 100% to the music, you have to make money.

Dead Rhetoric: And you’ve always been in a tough spot because you’ve had to contend with the King Diamond band.

Shermann: That’s always why bands like Force of Evil came to surface. That was out of all that. When we did the last show in October of ’99 on the 9 tour, we figured we’d take it from there, but that didn’t happen. King started to focus more on the King Diamond albums, then he had many years where he had some trouble with his back. Of course, we had to move forward and just see what happens. That’s why Force of Evil came up, and Demonica, and now we are talking about Denner/Shermann. Now we have come full-circle. This will be the last thing that’s really solid. Me and Michael have a really good relationship; maybe the icing on the cake for the fans in the future is that we’ll do another Mercyful Fate album, or do some special event shows.

Dead Rhetoric: King has always has said the King Diamond band makes more money. But if you flip it around, Mercyful Fate is more legendary. Does that bother you at all?

Shermann: I would say, I would personally not go out and talk about money and highlighting that it matters the most. That can give a different picture, if it’s all about the money and not about the music. On the other hand, of course it makes sense with King. He had huge success in the 80s with Fatal Portrait, Abigail, and Them. He can live without Mercyful Fate; we can too. We have so many fans asking constantly. Every time we post something on Facebook – is there a chance for Mercyful Fate? For the sake of the fans and everyone else, I hope that at some point, we can find time to maybe do a final album, which we have talked about. We have to see how it all goes. In the meantime, we have two good alternatives. He’s doing his stuff and me and Michael are doing our stuff.

Dead Rhetoric: Are live shows a possibility with Denner/Shermann?

Shermann: That’s a must. If you want to be serious with this, we need to go out there and show people who were are. Now we have four songs; if we went out tomorrow, we’d have to play a lot of songs from the new album, and also, everyone would expect us to play Mercyful Fate songs. That is what we’re looking at right now. We’re hoping to get something confirmed, whether it would be in the States or Europe. We don’t have a clue. We’re trying to get on festivals.

Dead Rhetoric: You had your period in the mid-80s where you drifted away from the band, which of course, led to Mercyful Fate breaking up. Have you reflected on that time at all?

Shermann: Yeah. Naturally, King disbanded Mercyful Fate on April 11, 1985. I think that was our last show. Before we played, he already knew that we were going to break up the band. Anyway, okay, well, he wanted to go a different way. He had bigger visions about sound, props, and theatrical performances. I said, “Okay, cool, if that’s what you want. Fine with me.” I didn’t think too much about it. This was in the middle of the 80s and there was a new movement going on with bands like Bon Jovi. Europe came to surface; Whitesnake. That more melodic approach with some hard rock/metal elements, so I got swiped into that and took it as a challenge. Then I formed a new band fairly quickly after the split of Mercyful Fate, called Fate. [laughs] I was out of better names. We made two cool records, one of them was released in the States, very Americanized, radio-oriented. One of my coolest memories from back then, it was when the girls and the guys were having fun together; the 80s were all about that. That was a cool two years for me. For true Mercyful Fate fans, it might have looked ‘Wow, is he crazy. What is going on?” On the other hand, if you take King Diamond, Iron Maiden, Judas Priest, everyone had their period in their music career where they looked silly.

Dead Rhetoric: Were you just burnt out on doing the regular metal thing?

Shermann: For whatever reason, King just wanted to basically proceed without me because of some misunderstanding or because I was at a concert and had some pink jogging pants on. Who cares about that? Later, they all look like prostitutes. That’s not the real deal. Whatever. Everything has a reason for a reason. Having those three records with Mercyful Fate made an outstanding impact on so many people. Maybe if we carried on into the 80s, who knows if we would have been able to keep it up? King has a very strong version and I really admire him for that. He has stayed so true to himself; he looks the same as he did in 1980 and when I meet him today, he’s totally the same. That’s admirable.