The sole holdover from their mid-90’s formation, Mercenary guitarist Jakob Mølbjerg is certainly a man of hindsight and utmost politeness. While the quasi-infatuation with the Mikkel Sandager-era of the band ensues (we are a guilty party), Mølbjerg remains a Danish gentleman, offering balanced insight as to why that incarnation of the band – one who threatened to be the next big European metal band – unraveled after the release of 2008’s Architect of Lies. Perhaps it comes with the territory of being the band mouthpiece; feigning ignorance on substantial lineup shifts or passing the blame merely exacerbates the situation.

After undergoing a 2010 facelift which saw bassist Rene Pederson take over full-time vocal duties, Mercenary’s first step back to normalcy was 2011’s solid Metamorphosis. As grounded and safe as that album is, the band’s new Through Our Darkest Days glistens with expansion and the Euro-friendly melodies and melodic death metal punch that makes Mercenary a unique commodity in that they’re highly accessible, but progressive at the same time.

Mølbjerg hit DR up at the rather un-metal time of 5:30 AM EST to discuss Through Our Darkest Days, the cherished pair of 11 Dreams and The Hours that Remain, and the subsequent lineup and focus shift the band has finally wrestled to the ground. Read on…

Dead Rhetoric: You made a big lineup overhaul a few years ago in which you got a new singer and drummer. Nervousness had to of crept in, right?

Jakob Mølbjerg: Both yes and no. On one hand, we could feel the band falling apart. This was a necessary step, so on one hand, it felt like the only thing to do, the only way to proceed. On the other hand, we weren’t sure how it would turn out. We knew it would be for the better because we knew we had to survive and do things in agreement. There were a lot of disagreements throughout the years with the old lineup, but when you change your lead singer, you know that upsets people and your fans. We were aware there were a lot of expectations and skepticism that we changed not only the singer, but the profile of the singer. Rene is a very versatile singer who covers the whole range, whereas he was on Architect of Lies with Mikkel, so we had both profiles.

Dead Rhetoric: Mikkel had such a distinct voice. You could associate that whole era, essentially your Century Media years with his vocals. I’m guessing the problems you mentioned had a negative effect on Architect of Lies, right?

Mølbjerg: Yeah, things were really falling apart on that album. To this day, I think it’s a miracle that album came out. Behind the scenes, none of the pieces of the puzzle were fitting in at all. We had to make a lot of difficult choices and argue a lot, for that, it came out good. I can’t listen to that album – every song brings back bad memories.

Dead Rhetoric: I remember when you got Rene in the band around 2006 and his main function was to handle the growls Kral [ex-bass] used to do, and now he’s your lead singer. To find out he has that kind of range, were you aware of that when he joined?

Mølbjerg: Slightly, yeah. He sang for a local metal band, harsh and screaming vocals, but our old keyboard player[Morten Sandager] knew he had done some pop songs with guitar, so we thought if he could play guitar, he could play bass, which is why reached out to him [laughs]. On Architect of Lies, I wanted to try out Rene’s clean vocals and range, but the personal chemistry didn’t make that possible. Everything felt very stressed and hectic. We were very confident in Rene when we took the step in changing the lineup, but we didn’t know how the sound would be and how his voice would sound on an album.

Dead Rhetoric: The Metamorphosis album, was that more or less a good starting point for where you are with Through Our Darkest Days then?

Mølbjerg: I think both Rene and the band as a whole got a lot of confidence. He did an amazing job, but we also wanted to present him in a very minimalist and honest way. We didn’t want to go into the studio and make him sound like we were six people. We didn’t want to achieve that big, epic sound with lots of layers of vocals. We wanted to be very basic, honest, and strong…very immediate, so we could present the songs live that way. That was a very natural and a necessary thing to do. I think we did that, and Rene proved to be an excellent singer on the album and live.

Dead Rhetoric: Correct me if I’m wrong: Last time you were here in the States was for ProgPower in 2006. The approach to the States then, is it a wait and see type of thing?

Mølbjerg: Yeah, that’s it in a nutshell. It’s always been a big investment to go on a tour in the States. Previously, we had the potential backing of a bigger label than we have now, but with the current economical situation of the music business, it’s that much harder. We’d have to finance it on our own. It would have to make sense and be a good offer and be worth it.

Dead Rhetoric: You’re a guy that has been around since the mid-90’s, so, what was the landscape of metal in Denmark like at that point in time?

Mølbjerg: It was mostly death metal and I wasn’t into death metal as much [laughs]. Like, in the mid-90’s bands like Sepultura and Machine Head were making an impact, so there were international bands making an impact. There were some Danish scenes with local heroes and bands, and one of those bands was Invocator. They raised the bar so much and showed us and everybody else that it was possible to develop a personal sound and push it really far. That was something that stood out and inspired bands. 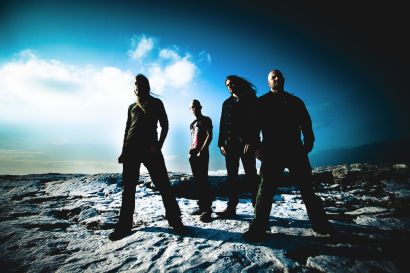