Mercenary – Dawn Of A New Day 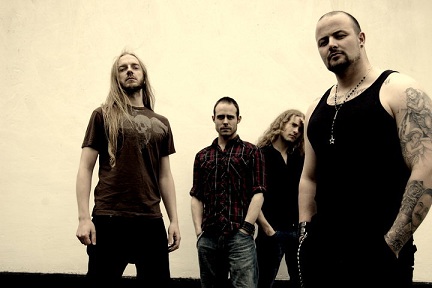 For a moment in time last decade (say, around 2005/2006), this scribe held firm to the belief that Denmark’s Mercenary were going to be the next great metal band. With the 11 Dreams and Hours That Remain albums, the Danes proved they had it all: A ball-busting singer in the form of Mikkel Sandager, a Euro-friendly and melodically capable sound, and most of all, tunes that strayed away from the dumbed-down melodic death metal angle of In Flames and Soilwork. Essentially, the pair were the apex of the Euro melodic death metal sound, with magnificent keyboard layers and sky-high vocals to boot. Both 11 Dreams and Hours That Remain emerged as two of the decade’s most imposing albums, so surely this set Mercenary up for a prosperous future, right? Not exactly.

Because the band weren’t a top priority for then-label Century Media, Mercenary’s profile in North America was a fraction of that in Europe, thus limiting their touring options. And when 2008’s Architect of Lies failed to receive a Stateside release, the writing was on the wall. By late 2009, the band shed Mikkel Sandager, his keyboardist brother Morten, and drummer Mike Park (who is now in Hatesphere), causing the core of the band to re-group and refocus.

The result is this year’s Metamorphosis (Prosthetic), which sees bassist René Pederson assume lead vocal duties. Pederson is no Sandager, but his throaty clean vocal delivery provides several inspiring moments on “The Follower” and album highlight “In Bloodred Shades.” Granted, Metamorphosis doesn’t approach the world-beating ability of its predecessors, but for a band that lost half its lineup, it’s a remarkable feat.

With that in mind, we snagged guitarist Jakob Mølbjerg to discuss the seismic lineup change, what went wrong with Century Media, and what lies ahead for one of the Danish metal scene’s premier bands. Read on…

Blistering.com: First off, how big of an adjustment was made after deciding to part ways with Morten, Mikkel, and Mike?

Jakob Mølbjerg: On the one hand, the change was quite big, because the whole public perception of the band changed and we knew that we really had to step up to meet everybody’s expectations. On the other hand, it was actually more or less business like usual, oddly enough. Martin [Buus, lead guitars] and I had been writing our material for a long time, and we continued to meet and do just that with the new lineup. It wasn’t a whole lot different, we just had a different drummer to jam with and structure our ideas with, which gave the process a fresh feel, and instead of recording songs with vocals and then hearing the final result later on when vocals had been added in the studio like we used to, we had René in the rehearsal room jamming with us. It felt very basic and to the point, and a whole lot simpler, truth be told. It was so much easier to write and finish songs and we were much happier with the result because we didn’t have to vote on everything with people which we basically didn’t agree with musically. It may sound harsh, but that was the reality behind the split.

Blistering.com: Were there any specifics surrounding their departure, or was it just a matter of it being time to go in another direction?

Mølbjerg: I think the guys who left had lost faith in the band quite some time before leaving. It was just a matter of people growing apart without truly realizing it at first. I guess it happened for different reasons for each of the guys, but some of them had kids and new jobs which took a lot of their time. At the same, time the rest of us really wanted to push the band further, to explore and strengthen our sound. So there was a big difference but natural difference in our motivation. People just grow apart as they enter different phases in life, it’s all too natural.

Blistering.com: When the band lost [founding member, bassist] Kral in 2006, it was a big deal, so is it safe to say you’re already well-prepared to handle the departure of key band members?

Mølbjerg: In a weird way, yeah, that’s correct. We knew the feeling of having to bite the bullet, face the music and work our way up, doing our best to prove all the sceptics and doubters wrong. But we’ve always played music for our own sake because we love doing it and love the lifestyle, so it was sort of an Archimedean point for us throughout everything. We do our best for the right reasons and we know it, so whatever happens, happens. The fact that we choose a difficult path because we believed it was right and managed to write a killer album that we’re all thrilled about is our biggest victory, regardless of whatever happens next.

Blistering.com: How disappointing was it to not have Architect of Liesreleased in North America?

Mølbjerg: That was quite disappointing, frankly. It felt like a step back, both because we lost a territory so to speak, but also because Century Media clearly didn’t believe enough in us to make it happen. We’re very happy that we now again have a release in the States.

Blistering.com: Do you think you had taken that version of the lineup as far as it could go?

Mølbjerg: Yes, definitely, no doubt about it. Looking back, it can even amaze me that we got as far as we did, because we were actually really different in terms of personalities, ambitions, musical tastes…the whole deal. Maybe if we hadn’t been so different, we would have made more of it, but you know, that’s just pure speculation. However, we did in fact turn down some good possibilities for touring because everybody didn’t want to commit to it, and who knows if things would have been different if we hadn’t done that.

Blistering.com: Both 11 Dreams and The Hours that Remain got excellent reviews, but the band never made its mark in North America. What do you think the reason was for that?

Mølbjerg: I think the main reason was that we didn’t do any touring. It is really expensive doing that since you have to pay for work visa’s, travelling expenses, crew and so on. Our own economy was never strong enough for that and our label didn’t want to support it either, so that’s it in a nutshell, basically.

Blistering.com: Are you hopeful that your signing with Prosthetic will help get the band its just due in North America?

Mølbjerg: That would be great of course, but we’ve learned never to hope for something until it actually happens. There’s some talk of touring options, but it’s still rather hypothetical at this stage so I’d rather not go into details about that. But if it happens, it would be amazing.

Blistering.com: What made René the right guy to assume the vocal position? Were you surprised at his range?

Mølbjerg: We knew from the moment that he joined the band that he was a great singer with a big range. But there was a really bad creative chemistry between him and Mikkel, so he didn’t really get a proper chance to do his best on Architect of Lies. We knew he could do a lot more, however, and since Martin and I had both a great personal and musical chemistry with him, we felt deep in our guts that it was the right thing to move forward with him and see wherever that took us. But hell yeah, he really surprised us. He did an incredible job and evolved so much as a singer during the songwriting, preproduction and recording of the album. He really stepped up.

Blistering.com: Are you more comfortable operating with just the four of you now? At one point, you had six members in the band, which is quite a lot.

Mølbjerg: Yeah, we are really happy with the way things are. It’s much easier to make decisions and we’re much more in agreement on everything. Everything is smoother. The last couple of years with the old lineup were quite a tough period, actually, so it’s a great relief to have gotten past that point. Touring is easier too, we just got home from the Power of Metal tour with Nevermore and Symphony X, and it wasn’t only the best tour ever in terms of all the external conditions, it was also the best tour ever in terms of our personal chemistry. We got along great and everything was pretty smooth. Well, at some point I had to throw half in orange in René’s face to shut him up because he was fucking annoying, but apart from that, there wasn’t really any tension, ha-ha!

Blistering.com: In your opinion, what makes Metamorphosis a better album than Architect of Lies?

Mølbjerg: I think the songwriting is much more mature, I think the vocal lines are catchier and fits the songs better, and overall the album just feels much more focused for us than anything we’ve ever done. The balance between aggressive and melodic vocals and elements in general are also much more to my personal liking.

Blistering.com: Do you still keep in touch with Kral?

Mølbjerg: Yeah, we speak on the phone once in a while and run into each other at concerts or at the music store where he works. I actually just had him on the phone for 20 minutes today, he quite liked the new album and rated it 925 out of a 1000, haha!

Blistering.com: With the new lineup and new album, you have to feel re-energized, so what are your hopes for the album and the rest of the year?

Mølbjerg: You know, we’re doing what we do and we’re really happy about it. We’ve already had a flying start with the Power of Metal tour so we are actually starting out with this new lineup in a much better way than we had feared. So we’re basically just enjoying everything that happens, so yes, in that way we definitely feel re-energized. And of course we have bigger hopes for the album, too. It would be great if we could make some sort of impact on the US this time, but in general we’re just hoping that people will pick up the album and give it some spins instead of dismissing it in advance. We’ve made this album straight from our filthy, dark hearts, and I think people can tell if they listen to it with an open mind. It’s all about the love of music, nothing else.