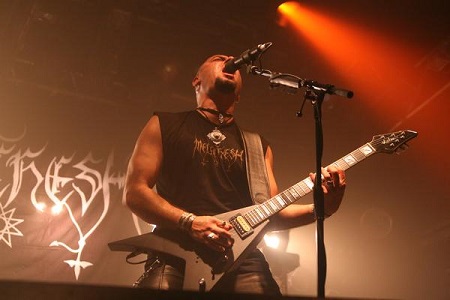 Blistering.com: Is the usage of 12-string guitars on the album a new practice for you? How do you think it impacted the final product?

Ashmedi: Composing on the 12-string electric helped give a slightly different mood – due to the octaves the strings offer. This enabled us to focus on single notes (with their octaves). It sounds great when it is used in a Middle Eastern style context. So we decided to record three songs (“Negative Theology,” “The Epigenesis,” “Mystics of the Pillar”) with those guitars as the main, but still backed them with the six strings guitars, so as to maintain a unity in the album production and sound. It is a very subtle thing, but those guitars added some feel to some songs – almost as if there is a chorus type synthesizer in the background.

Blistering.com: The title track is a real epic piece with so much going on throughout. How difficult of a track was that to compose?

Ashmedi: To compose it was very natural. After the main riffs were done, it was just a matter of jamming it. We wanted the listener to experience what we experience in the rehearsal room. The guitar leads were improvised and so were the drum fills, just to give it a sincere, yet ad hoc, feel. We will play this song live – but only in special occasions – due to its length.

Blistering.com: The upcoming European tour with Nile is a nice package that many wanted to see. How did that come to fruition?

Ashmedi: It happened really fast! The organizer is Massive Music, and they are our touring agency. I think everyone involved felt this is a logical step. No sooner was this announced, the feedback was very positive and we got the idea that yes, this was also desired, and anticipated by the audience. So all in all, we’re glad that this is happening. Prior to this tour, we are also doing a headline run to commemorate the release of the album. It will be 6 dates in Central Europe, where we will play an extended set.

Blistering.com: It’s also very nice to see that you’re on the upcoming Rotting Christ tour in North America next year, with it being the band’s first full scale tour on this side of the Atlantic. What kind of expectations do you have for this run and could it be a sign of more tours to come in this part of the world?

Ashmedi: I like Rotting Christ’s music a lot, and again, the common theme – there is the Mediterranean mysticism. We look forward to touring in North America. It is a different ballgame in USA when it comes to logistics andexpenses

. I surely hope we will be coming more often indeed.

Blistering.com: What is your favorite part of the creative process of making an album?

Ashmedi: After writing a song, I tend to make demos for it. Suddenly, the song becomes real and whole! It is great to sit and listen to the song then. Then the songs are reviewed again and again in the rehearsal room and tweaked till the last minute in the studio. After mixing and mastering and dealing with all production aspects, you get the finished album and other people also get it and trip on it. Makes it all worthwhile.

Blistering.com: Tell me a little bit about the cover art for The Epigenesis. What was the primary inspiration?

Ashmedi: This album cover perfectly reflects the music. It incorporates lyrical themes, and Melechesh’s artistic concepts. We worked with John Coulthart, with whom we have worked with for the previous album. His style and ours in cover art is anything but cliché, but still it feels natural, if you know what I mean. The whole art discussion was very interesting. We wanted Sumerian, Mesopotamian, Persian, Occult elements. But also artistic themes derived fromThe Color of the Pomegranate film; as this film is artistic and deemed by directors as best film ever made, cinematography wise. We also used the golden ratio – a mathematical formula and art concept used by da Vinci and many Greek architects. So, yes, again with the cover art – a lot of thought was put into it.

Blistering.com: Music aside, what kind of things do you enjoy doing? If you have that much spare time other than your music, that is!

Ashmedi: I don’t have that much spare time, but to put my mind off things, I like to cook and invent dishes. Writing is a new thing I am into. I find both of the aforementioned very therapeutic and relaxing.

Blistering.com: Are there any places in the world that you have yet to play that you would personally love to perform at?