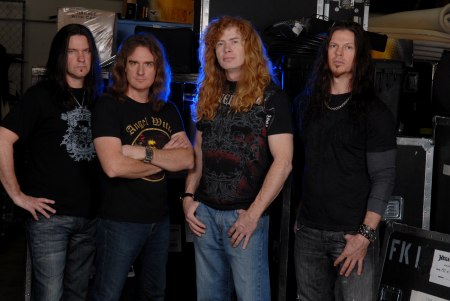 Blistering.com: Has this whole experience with playing the entire album taken you back to when it was recorded?

Ellefson: This is an album we wrote in our darkest days of the band. Dave and I were not in our healthiest place at all. We wrote this recorded in such a dark place, but we sobered up when we recorded it, so physically, we were capable and had the stamina to just lay it down. I think that’s where you get the ferocious nature of it all. We weren’t clouded at all when we recorded it. I don’t recommend doing that at home [laughs]. You can live to tell about that once probably, but not again.

Blistering.com: Countdown was the band’s highest-selling album, but this one has always been the one that has resonated most with fans. To you, what’s the main appeal behind Rust In Peace?

Ellefson: I don’t know, because it didn’t have radio singles, it didn’t have big media exposure. Here’s the thing that I learned being there during that time: we worked so hard with Killing… but it’s so rough round around the edges.Peace Sells we really found our own…it’s one of our masterpieces. Then with our line-up change, So Far…So Good…So What! continued that, but it wasn’t as solid. But for Rust In Peace, we had a really good band line-up. We were four guys that thought metal. Our hair was the same length, we were in shape – we approached the whole thing…it was a well-oiled unit. We were able to carry that through Countdown and then Youthanasia was a shift and then later, Cryptic Writings, music was totally different. Nu metal was popular and we were reinvent ourselves.

With Rust In Peace, it was a moment of time where Anthrax were doing their best work. Metallica had done …In Justice for All. I think all of us had been around long enough that our fourth album, our fourth studio albums became our crème-de-la-crème of our work. For us, the fourth album, was the pinnacle – Slayer, Megadeth, Anthrax, and Metallica.

Blistering.com: That segues into the summer Sonicsphere dates with those bands. What can Europe expect?

Ellefson: Well, don’t expect it come to America just yet [laughs]. What they’re trying to do with Sonicsphere is that they’re trying to take a name-brand of a festival and move it around to different countries, try to keep the headliners, tweak the bill a little bit and the take the European mindset and incorporate a little more of the Americans approach to festivals. Here, you take a bunch of bands together and take it around for a 40-date tour. Long term, could it come to America? Maybe?

There’s a lot of people, a lot of music and it is the anchor and focal point for any metal fan for your whole summer. It’s a cool concept, but they roll way different over in Europe [laughs]. Here, you won’t find people camping out and setting up tents in the parking lot. If you pitch your tent for the Mayhem, you’d wake up tomorrow and Dave Mathews would be rolling in. It’s run much more like a business over here while over there, it’s very much a grassroots and rock and roll and mindset.

Blistering.com: You’ve done a lot of work over the years with Peavey and you wrote your own book on the music business. What’s your take on the situation?

Ellefson: Well, people keep on asking me to write a follow-up to that book, but the truth of it is, is that by the time you actually sit down, write it out, edit it, secure the publisher, put it out, half it is old news. That’s why I started “David Ellefson’s Rock Shop.” Let’s put the book out through Youtube. I do it and I can have an outlet. During meet and greets – that how I got inspired to do all of that. Royalties, performance issues. People don’t think about – none of us think about it until we’re actually faced with it.

The industry is totally different now. I say to Dave that we got in just under the wire. We started in the early 80’s, secured a deal with Capital and got on with it. We weren’t thriving by the end of the 80’s, but that’s when were rising up and our moments were in the 90’s when we hit it. By the time, the Seattle movement came in and it was all anti rockstar, that was the end of it. Theculture

had shifted and it changed everything. It’s a good time as a musician because you can be creative and put stuff out, but now with the Internet, you’re looked down upon if you make any money.

Blistering.com: You have this tour, then Slayer/Megadeth/Testament, then Europe. What’s on the agenda after that?

Ellefson: I have an idea but I can’t tell you because management was here last night. Basically, we’re booked [laughs]. That’s all I can tell you.