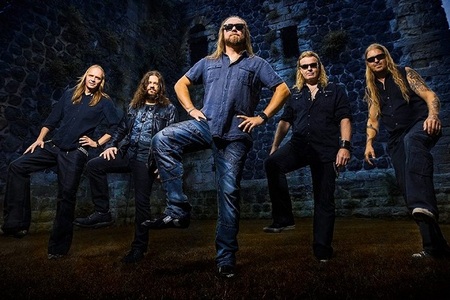 Dead Rhetoric: Do you believe some of the significant lineup changes in Masterplan- especially in terms of vocalists – could have stalled the forward momentum of the band? Or have the fans been very understanding and accepting of these changes?

Grapow: I think singer (changes) are always drastic. Especially when you have a good singer…I just realized I’ve never had a bad singer (laughs). And somehow I’ve always worked with great singers, like Mike Vescera, Andi Deris, Michael Kiske, even a little bit of work with Russell Allen, Jorn Lande. I have the best singers I could only dream about, Mike DiMeo. The problems… Masterplan started with the most extreme personality we could have. A singer for power metal that was totally different than what everybody was expecting. You see what we had done with Helloween, and then you bring in Jorn who had this bluesy, powerful voice- at that time more like (David) Coverdale than now, today he’s more like Dio. I loved this style he had, it was very different and I was very inspired. He could sing everything- the first song that we recorded was this bonus track for a Spanish label – “Black Dog” from Led Zeppelin- and he just did it two hours before we left to bring him back to the airport. That was the first time we were meeting, and it was so beautiful.

If we had continued with this lineup we would be somewhere else, but of course I can’t keep the people. He had dreams with his solo work, he was never 100% happy with our power metal style, our melodies. He always called things out in a negative way for the melodies- but I’m proud about that. This is something that Helloween invented – Michael Weikath especially. I like the ideas in those melodies which are different. He wants to sing different stuff- and I’m a guy who doesn’t like to give up, I try to continue. It’s not that easy when you always have different singers.

Dead Rhetoric: When it comes to your songwriting, do you find you need to set aside special times to work on your craft or does inspiration strike you on any given day at any given time?

Grapow: I’m really, really strange in that way. I’m writing in periods, only. I never start the day and think I will write a song. If I have an idea, I’ll just record it on my phone and save it. The last three years, I have a lot of vocal ideas now which is beautiful. As a guitar player, I was always writing with the guitar parts in mind, which is not very inspiring for me at all. I think all the best songs I wrote in the past were on the keyboards and with drum grooves, and then putting my guitars on. I have so many good vocal melodies ideas already, I’m pretty sure it will make the songwriting process easier when I start writing this next set of songs. We are working soon on the next album.

Dead Rhetoric: You’ve talked about in past interviews your friendship with Andy Sneap and the respect you have for his production work – including what he’s done for Masterplan previously. What tips or insights have you received from him that you’ve been able to apply yourself to make the final product sound that much stronger?

Grapow: It’s not so easy, because he’s not giving so many detailed tips. I love him so much, I visit him roughly every two years- the last time was in January last year. Every time I come back, I’m inspired, I learn something again, and I’m getting better and better from talking. He’s not so much telling me or showing me, just to give me confirmation that what I’m doing is right and that’s how he does it as well. I remember five years ago- every year is a step forward, I feel better and better as a mixer and a producer. It’s basically his fault- he has a different way of working and he has a good ear for making drum and guitar sounds. I remember when we were working on the first Masterplan album, I said ‘I want really great guitar sounds, finally.’ I wanted to continue- and we spent three days in my little home studio in Hamburg to find a good sound. It was really difficult because I had this little garage, not good acoustically, and we found this one lone spot. This sound I haven’t been able to get back in my Czech studio- so I was so proud of the guitar sound for those first two Masterplan albums. No other band has sounded like this- not even one of the bands that he produces. The combination of amps and cabinets made the magic.

Dead Rhetoric: How do you navigate the changing landscape of the music industry in 2017 where technology, the internet, and social media seem to be ever present and keeping engaged with the fans is even more important than ever?

Grapow: Basically, two or three years ago this wasn’t affecting me so much. Now I feel like it’s like a joke, and I will talk about. When something is happening, sometimes it’s good not to talk- myself as a person I don’t like to talk about problems so much – but when I read a comment about why we made this album, because we want to make some cash? I’m laughing, they don’t realize how much money I make with an album these days, it’s a joke. People still think we make big cash, the only money that I really make is from my studio, musicians, clients, mixing albums. There is still an advance for each album, which went 40% down. That means people still want quality albums, but we have much less of a budget and not so much inspiration. When normally twice a year we have this GEMA publishing money, and it’s so little now. 10 years ago, 20 years ago let’s just say I had 25,000 dollars- now I have maybe 600! For 600, you can’t even pay your rent, only one month. And that’s what you get. The only chance to make money is for a certain level of bands, which I’m not counting Masterplan in. If they go on tour they make money on merchandise and with their ticket sales.

When we tour, it’s really difficult because we are not filling all of the places. We had a headline tour two years ago and I was a bit disappointed with some of the turnouts in Germany. We sometimes played in front of 50 to 200 people, and two or three shows from the European tour were cancelled because of bad ticket sales. That’s the level… so people complaining about this album, which is from my feelings and for my ego to say I want my babies back from the Helloween days- there’s nothing else. I’m not making big cash. Many musicians end up seeing this as a hobby- they don’t know what else to do. Many famous drummers get endorsements- I’m not in that boat. They can live from that, they play on fairs, give clinic, teaching. Look at my friend Ralf Scheepers- he’s teaching vocals, that’s his main job. Also my band members, they have jobs.

Dead Rhetoric: Has your outlook on guitar playing changed from when you first started until now? What is your stance on technique versus feel for instance?

Grapow: What’s really changing over the years – I was rehearsing a lot when I was in Helloween, around five hours a day. I was pushing myself so much that I wanted to reach something. Nowadays I am so busy in the studio sometimes that I don’t touch my guitar for weeks. The funny thing is, when I start warming up let’s say for gigs on tour, I feel like it’s still there- nothing’s changed. But of course, I’m not getting better- but somehow, I feel that the feeling is getting better. I call it the bluesy kind of thing- you play more with feelings, not so much with the head. I was thinking too much about scales, playing fast, this and that- and now I try to give feelings to the people. Maybe it’s because of getting older, or having more experience.

Dead Rhetoric: Has work begun on the next Masterplan studio album – and what can the fans expect stylistically compared to the last one Novum Initium?

Grapow: I don’t exactly know when it will end, but I told you about the dreams I have with the vocal ideas. Maybe it will be more melodic in terms of the vocal ideas, and a little different in terms of the arrangements. We are thinking about using orchestration on one of the longer songs- not the whole album because that would be too boring for me. We want to make some strong, powerful songs again. I’m really into it now, I’m excited about the next album.

Dead Rhetoric: Considering the work that you do in terms of producing younger bands, how do you feel about the state of heavy metal today – are there things that worry you regarding the outlook and health of the scene?

Grapow: These young musicians, they play so much for the technique. They aren’t really good about bending notes, about vibrato. It’s not like the young guys of the 70’s such as Michael Schenker, John Sykes, or Hendrix. Nowadays, it seems to be more about competition- who’s faster, who’s more tricky. I think the main reason is because everybody can learn everything through YouTube. And everybody is showing stuff over the last 20 years- I was learning how to play the guitar by really listening to the records and copying the material without knowing how they did it. I think that’s the difference.

In terms of songwriting, there’s a lot of copying still. They are trying to be like the famous bands of… a lot of Helloween influences I hear. They are not trying to make the music like Helloween but they grew up with it- it can be a step further. I don’t think it’s as easy for young bands to make it big. I am working with Lords of Black on their third album- I think it’s really great as (Ronnie Romero) is the new singer with Ritchie Blackmore for Rainbow, and they are being pushed in Japan a lot because Japan loves Ritchie Blackmore. The singer was invited over there a couple of times. I’m working with a lot of extreme metal bands, thrash metal and such- brutal stuff they are doing.

Dead Rhetoric: What’s in store for Masterplan over the next six to twelve months?

Grapow: Nothing special. We made this album as a statement, I didn’t want to promote it live too much. We have a festival we are playing in Spain, and then we will be writing and recording the new album this year. We have April planned of next year for the release date, that’s what I promised to AFM this time. I don’t want to keep them waiting and waiting. And hopefully some touring next year, we want to get to South America, Scandinavia, we haven’t played those places in a long, long time. And many festivals of course- they are always waiting for some new product, and not just the DVD that we have released or the PumpKings album. They don’t really count to the promoters, they want some studio work.