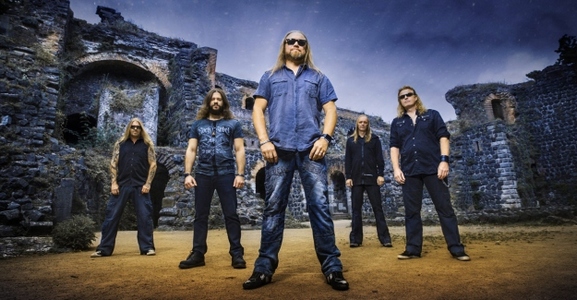 What is old and nostalgic can become new again – especially to a younger generation less fortunate to experience the wonders of a classic band in their prime. The current fervor surrounding the Keepers-oriented reunion tour with Helloween has caused many to revisit the band in a new light. Masterplan guitarist Roland Grapow of course spent the 1990’s stepping in the shoes of Kai Hansen for the band – becoming a contributing songwriter for many of the five studio albums he would work on with the group. Arguably the premiere power metal outfit, he would see the band go through commercial lows (Chameleon) and revitalize themselves with Andi Deris for Master of the Rings and The Time of the Oath.

Feeling the need to re-record his songs from his Helloween years, PumpKings is a journey through Roland’s musical history. Realistic as well in that many will scoff at the current lineup outdoing Kiske-era cuts like “The Chance” or “Music”, there is an extra heaviness to a song like “Escalation 666” that thanks to production advancements gives the track more punch. Already aware of the ‘cash grab’ tag thrown about, it’s interesting that other eras of the band can revisit or rework Helloween material (Unarmed, Michael’s acoustic record Past in Different Ways), but waiting this long for Masterplan to release PumpKings can be criticized. Life can be cruel in that regard – but in the end, it’s out there – allowing the band to gear up for the next studio offering.

We reached out to the very engaging Roland and had a conversation regarding his time in Helloween, the struggle to sustain a living in an evolving music industry, what he’s seeing in younger bands now as a studio owner and producer, and hints at what we could expect from the next Masterplan record.

Dead Rhetoric: The latest Masterplan album PumpKings was three years in the making from original idea to final release. Now that it’s done, what do you think you’ve learned the most from the transformation of these songs originally done when you were in Helloween to now?

Roland Grapow: I think this was something that I thought would be easier. When I started recording this, it was January of last year when I started recording the drums, and slowly recording and arranging the stuff. The album was supposed to be out last year in August, it got delayed so many times. I felt a little bit stuck, like ‘wow- what is going on?’. When you re-record your own stuff, especially songs that you did 20-25 years ago, was a bit weird of a feeling. When Rick was singing the lyrics, everything was déjà-vu. The feelings came back from a long time ago, these are all personal stories more or less. Every song is a story– maybe not “Mankind” so much, or “The Time of the Oath” – but all the others that I wrote lyrics for.

It wasn’t that easy- writing a new album and recording it is much easier. It’s like a historic car, you try to rebuild something and you have to try to make it even better. I don’t think it’s better, it’s just a different color or something. I wanted this album more updated in terms of the sound and the recording techniques. I didn’t want to change things up too much.

Dead Rhetoric: Did fear or apprehension set in on Rick’s part tackling songs that have been done previously by Michael Kiske and Andi Deris?

Grapow: For sure, we talked about it and he wasn’t happy about it. But I was pretty sure he could handle the Andi-era songs. He’s very close to that distortion kind of sound, I like Andi’s voice- he has something special in his voice, and I don’t think many people have it. But Michael Kiske of course, he’s very special. Somebody that can sing in the vein of like Geoff Tate, they aren’t so many people singing like that anymore. I remember 20 or 25 years ago maybe the guy from TNT could do it (Tony Harnell). I was even thinking maybe I could sing a little bit more, I have been singing more the last three or four years. I was really pushing myself in technique, it’s possible to learn – but when you are close enough but you are not better, I just gave up. I didn’t want to put myself in a bad light as ‘this is not even as good as Kiske’. Everybody says Kiske, but to me he is Michael. I just sang on the bonus track for Japan, “I Don’t Wanna Cry No More”. I think it’s okay, but I was under my own pressure thinking about Michael Kiske all the time. That’s such a personal song, I wrote the melody for Michael to sing it just the way I did – I sent him the demo tapes from 1993. When you sing it and have his voice in your head all the time, you try to copy it and the copy is never as good as the original. I think people are used to it, and people have that in their head.

Dead Rhetoric: What are your fondest memories of the 1990’s-era Helloween that you were a part of?

Grapow: The beginning was maybe the best part. Also, not the easiest part- but for me a dream came true to become a professional musician to have this phone call from (Michael) Weikath to join the band. Maybe I need to have a test or something- he said, ‘no, no – I know how you play’. It was nice- but I came into a situation that was so difficult, from the record label situation from Modern Music, the lawsuit that stopped Pink Bubbles Go Ape from being released. I tried my best as a songwriter to fill the shoes of Kai Hansen but the rest of the band didn’t even write metal songs. I have had really good contact over the last couple of weeks with producer Chris Tsangarides who produced this album, it was a nightmare to him and to management- everybody was so disappointed in Michael Kiske and Michael Weikath, they didn’t write any metal (songs). The next step would be Chameleon – so it went further and further away. Business-wise, Helloween made everything wrong in (what) we could do. It was not my fault, but maybe people were blaming me because of when I joined everything went downhill in a way.

I think we did some great albums, we did something special- we did what we wanted. Especially Chameleon, I joined these guys and we decided to do something more 70’s style with feelings. But then live was a disaster after the Chameleon album. The people didn’t like the music, we had too many ballads, acoustic guitars on stage- and Helloween (was) a power metal band. Then I felt everything was wrong, we needed a lineup change, Ingo was very sick at that time. The live situation after that, and when I went to America with Helloween for the first time after that, doing those Keepers songs was a dream for me. There were many, many good moments there. And the business was amazing- imagine, we made a lot of money! (laughs). Not at the time in the beginning when I joined, but when Andi Deris came in – Master of the Rings and Time of the Oath, those were so easy to do.

Dead Rhetoric: How do you look back on The Dark Ride and your departure from Helloween? Do you believe now that there were other circumstances going on behind the scenes that caused you to be let go- rather than looking at the quality of the output?

Grapow: I think the output was amazing, I love The Dark Ride. I think it was one of the best albums I ever did, and I think what I learned from Roy Z was a key point for me. As a musician, you work with a lot of producers but nobody was telling me anything- they would leave me alone and say, ‘oh he’s a really great guitar player’. You want to go to the studio when you have a producer that helps you, supporting you. He should normally be better than the musicians. Roy was the kind of guy I respected from the beginning because he worked with Rob Halford and Bruce Dickinson hand in hand- plus he’s a great guitar player. He inspired me so much with the down tuning, he said I should check out bands like Linkin Park, Slipknot, and others- and I did. I was inspired, and since then I like this down-tuned, different kind of style and putting it into power metal to make things more colorful. That’s why I like The Dark Ride a lot, because it was a statement we did. I don’t think we should continue like this, Chameleon was kind of like the white one, The Dark Ride was the black one. And I love this idea, it was a beautiful last album with the band so I was quite happy.

Why I was fired, that has basically different reasons I guess. I’m not exactly sure why it was and I’m not sure I want to know to be honest (laughs).

Dead Rhetoric: How do you balance out the workload between Masterplan and the studio that you own and run? Is this why you had to let go of Serious Black after the debut album, because of their desire to make it more of a full-time, touring/recording entity?

Grapow: Yes. That’s a kind of decision you have to make sometimes about timing. People ask me if I can join a band- which I have done now with a Czech band Kreyson. They are an older, legendary band and really famous in the Czech Republic. They asked me to (play) a few festivals and a tour of seven gigs in the winter- and I just play guitar. They don’t even want me as a studio guy so far, and Chris Tsangarides that’s why I am coming back to him, he was mixing the first song we did with him. With Serious Black, there was a big hope from Mario (Lochert), the bass player from the band. He wanted to tour worldwide, and I said, ‘hey I can’t do that- I have my own band and my studio.’. I thought about how much money we were going to make- at the time I was not married, I had a girlfriend and my dog was alone, I don’t have any family here in the Czech Republic. I was getting nervous, and getting sick with my ear infection that I had- maybe more or less stress. So I couldn’t do that tour, and I told them maybe it would be better for the next album to find a guitar player who was better for a stable lineup. So that’s why I didn’t continue. We are still friends, there are no problems.