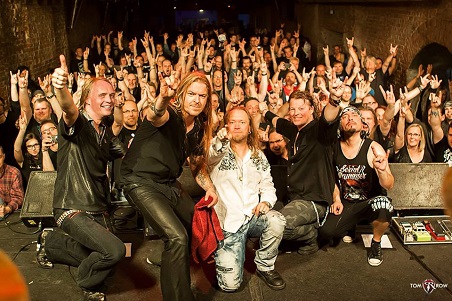 Dead Rhetoric: Some of the songs on the debut, they were intended for the follow-up to The Dark Ride, right?

Grapow: Yes, even a couple of songs were written for The Dark Ride, but not completely. “Into the Light” was already recorded with Helloween without vocals. Andi Deris never sang on it; this was basically written by Uli and some friends and we thought it was too good not to use it. And a lot of the parts of from “Soulburn” was written for The Dark Ride, like the progressive beginning, but they didn’t like it for whatever reason.

Dead Rhetoric: You talk about all of this stuff that happened when you left Helloween, so, how motivated were you when you formed Masterplan?

Grapow: Very motivated. I said to Uli, and we had a really close relationship at the time: “If we’re not doing it right now, we’re out of business.” I felt, it doesn’t help you if you’re just an ex-member of Helloween. It’s really sad because most of these bands have an image. Management, which was Sanctuary Management, they wanted Andi Deris and Weiki [Michael Weikath] presenting the outside guys of the band, but the inside guys, the most important people, were inside the band still. And of course, Andi Deris was the main songwriter. I was getting bigger; same with Uli. You could see we were really disappointed about it. But I said that doesn’t help because people think about images. We were not the most important people in the band – that’s how I saw myself.

So I said, “Let’s do it right now and do the best we can.” We took everything we learned while in Helloween – especially The Dark Ride album, I learned so much from Roy Z. I was much more involved in the progress. We had a lot of close talks, because he felt something was wrong in the band, so he was explaining to me I should give 100%. I lost some focus, when I started my solo career with my two solo albums; that was already the beginning of feeling something is not right in the band.

Dead Rhetoric: Andi put a solo album out [Done by Mirrors] around the same time you did, though.

Grapow: Yeah, and we even went on a Japanese promo tour together because we had nearly the same release date.

Dead Rhetoric: I listened to Better than Raw a few days ago, and you could hear your influence on a good portion of those songs.

Grapow: For a short while, I was getting away from it. Then, I felt especially on The Dark Ride, I’ll give 100%, because I had a big talk with the rest of the band members and management and they felt I was losing interest in the band, so I said I was sorry for that and I’d give 100%. It was my last warning. I gave so much of the recording, like 80% of the guitars, but in the end, everybody was happy with the album except Weiki. Then on the tour, I gave 100%, and I’m thrown out because I gave too much. [laughs]

It was strange, because I once I said, “I think we should concentrate more on your instruments, all of you.” There are a lot of great fans and some people are telling me, “Hmmm…without telling names could play better because they’re not concentrating anymore.” And I know why, but it’s too much internal now. When I said of the very private situation, three guys were just sitting there, me and two other guys were sitting there from the band, and I said like friends, like colleagues, without any aggression, in a nice way, the guy went so nuts, that I guess that’s why I got thrown out.

Dead Rhetoric: Maybe the ongoing debate with that album – and I’ve spoken to Weiki about this – is that you went a little too dark, that you went away from the core Helloween sound.

Grapow: Before, maybe I was a bit worried, but I when I heard the album, I loved the sound. Of course, some elements of the older Helloween was missing, but hey, c’mon, when you see a career of how many years, 15 years at the time, now it’s even 25. Let’s make one album that’s a bit darker, c’mon. We have one album which is a white one called Chameleon! That’s the opposite!

Dead Rhetoric: You were the guy in the middle for that album. [Michael] Kiske going one way, Weiki the other.

Grapow: You have to imagine that at the beginning, I was very shy. I was the oldest, but I didn’t speak much. I was sitting and thinking “Oh my God, what’s happening?” I was a car mechanic. I was not playing in a professional band before. Rampage made two albums. I joined Helloween, there was eight years of nearly nothing, just pre-production and playing small gigs in Hamburg. Then I joined the band and they were so famous, and Keeper II kept growing and growing. I joined the band on the second half of the tour, we went to America, then to Japan, then we had those two years of break before Pink Bubbles.

And I thought, “Everybody wants to the change the sound of Helloween. Why is that?” At the time, the big discussion between Michael Kiske and Weiki was, “We don’t like metal anymore; we like Queen.” Which is bullshit. At the time, like I said, the band was so famous, they had a new deal with EMI in England and there was so much money involved, then the release of Pink Bubbles and Chameleon, which was the next step of two or three years of talking “We want to change the style.” I followed as well, and I wrote a couple of pop rock songs. Like “Song for My Brother.” I liked it at the time, but then we totally lost the deal with EMI. [laughs]

Dead Rhetoric: “The Chance” is the best song on Pink Bubbles, and that’s yours.

Dead Rhetoric: So the straightforward metal stuff was up to you.

Grapow: I still remember in talking with [producer] Chris Tsangarides in the studio when we were recording my guitars. He said, “I don’t understand the band anymore, these kind of compositions, especially Weiki and Michael, but you are the new guy and you write the most metal songs!” [laughs] And I said, “Yeah, sorry. I don’t know what to do!” But it’s crazy, but I couldn’t speak English very well at the time.

Dead Rhetoric: You had some mighty big shoes to fill at the time, too.

Grapow: Yeah, but not to be disrespectful, but I was never a fan of the band before. I didn’t know Helloween. When I replaced Kai [Hansen, the man Grapow replaced in 1989], of course I knew his playing. A lot of people loved him and saw him as the main guy of the band. It wasn’t so much pressure for me as a guitar player, but of course, because I couldn’t speak English, I was too shy. Not on stage so much, but when we had meetings, I never said anything. The English management always talked and talked, and I never could say anything because most of the stuff was too difficult for me, the English pronunciation. Most of the stuff was business talking.

Dead Rhetoric: Have you talked to Uli in a while?

Grapow: He’s totally out of the scene. I just heard some stuff about him, but he’s in Norway, not doing any music. I don’t know if he has a job right now. I know he was a carpenter, then at school, how do you say? He was a housekeeper?

Grapow: Yeah, but he has a big family. He has two kids with his former girlfriend and two kids with his girl in Norway. And then he had big problems with his wrist. I was never sure if it was 100%; he always said he had trouble, but then I see him working in the studio on some projects. He can still play drums. I really called him my best friend for a long period and I told him, “You’re like my brother.” But what happened a few years ago was really disappointing. We had a little contact last year and even before Martin was in the band, I asked him if he would play on the next Masterplan drums. Not live, but studio. Even if he has some songs, give them to me. I was always inspired by him.

Dead Rhetoric: Have you caught wind of the potential big Helloween reunion rumors?

Grapow: Oh yeah. I’ve heard rumors, but I don’t know what type of reunion this should be. Kai plays with them all the time on tour anyway, but if Michael Kiske were to come back for more touring or special guests, I don’t know. There should be more people involved, not just these two guys.