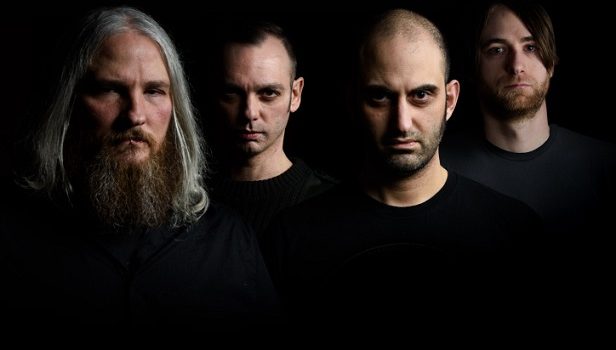 Clocking in at approximately 37 minutes, Loviatar’s self-titled first full-length (hereby released by Prosthetic) is formatted in such a manner that you don’t understand the entire scope of the band until the 19-minute “Blind Goddess of the Nine Plagues” emerges. The album–a lavish concoction of post-rock, doom and Goth–abides largely by the smooth croon of JD Gobeil and and careening, pulsating dark metal motifs. But on “Blind Goddess,” the Canadians swallow up the sonic landscape whole, employing careful pacing until a sudden barrage of blast-beats throws the song off its course. Post-metal rarely sounds this unhinged.

An outfit that formed in 2010 and popped out several demos and EPs before being picked up by Prosthetic, Loviatar are part of the new breed of savvy, almost art rock-like bands who nestle comfortably in our scene, but can also make hay elsewhere. Such things were on our mind when we sent some email questions over to the band. Drummer JP Sadek responded in kind…

Dead Rhetoric: You have been active since 2010, but have been awfully prolific since then. Can you describe the early days of the band?

JP Sadek: Loviatar was initially born as a duo [JD and me]. We were consciously trying to test the limits of our songwriting, as we felt confined by previous projects. “Blind Goddess of the Nine Plagues,” side B of this LP, was actually the first song we wrote, so it’s been around for almost eight years now. Our eyes may have been a bit bigger than our stomachs, as 20 minutes was just too much time for us to fill on our own.

We got down to writing some more traditional doom material and got Mike [Bond] to come in on bass to round out the sound. When we recorded our third EP [Druid’s Curse] with Shane [Whitbread, guitar], it felt like we finally had all the pieces to our sonic puzzle. His atmospheric, ambient guitar style provided the perfect backdrop to our story telling and thematic exploration.

Dead Rhetoric: There’s been a gradual progression from each EP until the self-titled album. To your ears, in which ways has the band grown?

Sadek: Everything about the band has changed from our early days, save perhaps JD and my focus on using mythology and fantasy to explore what we deem are the failures of humanity. Our songwriting has definitely gotten more complex, and Shane’s involvement in the band has made us much more expansive than we ever thought we could be as a two or three piece. It’s a more subtle, less in your face style of music than when we first started out. Having that noise element focused the rest of our writing so as to create a stark contrast for the listener. It’s much the same in our concepts. We’re wrapping our thoughts on human civilization, corrupt religions and the suffering of the downtrodden in epic fantasy and myth.

Dead Rhetoric: How did the deal with Prosthetic come about?

Sadek: Very simply. We sent a preview of the record to what we thought was a very small record label. It turned out that label hadn’t been very active recently, but the owner was working with Prosthetic. He liked what he heard and put us in touch with Steve Joh at Prosthetic. It’s been a great fit for us.

Dead Rhetoric: You have your own studio. Was it built out of necessity? And, how valuable is it when writing and recording?

Sadek: The studio [Wolf Lake Studios] is a joint venture between myself and Mike. It’s been a dream of mine to have this kind of space. I live in an isolated forested area north of Ottawa, and my house had a cavernous basement with a dirt floor so we were able to start from scratch.

As the studio started taking shape, it felt more and more like Loviatar had a home here. It’s definitely made the recording process more enjoyable for everyone and feel less like work. We’re free to play and write at our own pace, and building the studio brought us closer, pretty much made us family.

Dead Rhetoric: As often is the case in post-metal, bands don’t rely strictly on clean, well-enunciated vocals like you. Do you think guys (like JD) who can actually sing is becoming a lost art?

Sadek: No. I don’t think people who use death grunts and screaming and other modes of communicating can’t sing. They’re exploring a form of expression that they feel is unconventional and fits their style of music. As metal is becoming more pervasive in our society, we’re inevitably going to see more variations on vocals. It takes tremendous skill to do anything well in metal, and to not sound rote or repetitious. I’m not saying we are the most skilled in that respect, but that was definitely a conscious decision that we made and that we hoped would be a defining aspect of the band. In “Blind Goddess of the Nine Plagues,” there is actually a backing vocal track that’s me harmonizing yelling with JD’s main vocal. It’s really subtle, but it fills out the sound.

Dead Rhetoric: Where did idea for the Stygian Wyrm trilogy come from?

Sadek: The trilogy is based on an original idea of mine. I wanted to follow a dragon from the moment of its birth [a horrible moment, drowning while surrounded by fire and lightning], and apply the corrupting effects of humanity to a timeless, ancient creature. The adjective Stygian refers to the river Styx. The Dragon drinks its water, which was said to erase all of one’s memories in preparation for the afterlife, in order to forget a moment of tragic loss. He chooses to trade his pain for a corrupt rebirth, a lie. He is a foil for humanity, in that his most important decisions are made out of weakness and fear. The lyrics to the song are verse passages that represent the biggest story shifts and main themes of the trilogy, but there is also a lot of accompanying prose.

Dead Rhetoric: Was it difficult to write within the confines of a concept? Is it something you’ll continue to do?

Sadek: Not at all. It was very refreshing to be able to focus on an idea and expand it to this degree. It was probably more difficult to restrict myself to the music we had written, hence the need for accompanying prose. Concept-based songwriting is definitely something we’ll keep exploring. We’re working on our second full-length now, and it felt natural to continue to write along thematic lines.

Dead Rhetoric: “Blind Goddess of the Nine Plagues” is quite the monumental song. How long did it take to put together?

Sadek: Thank you. Like I said before, Plagues was the first song JD and I worked on back in 2009. It was almost a mission statement for us, in that we had decided on Loviatar as a figurehead for our work on themes of desolation, hardship, alienation and corruption. When we were deciding on the direction for this record, it seemed fairly natural to pair the song with Stygian Wyrm, so we pulled it off the shelf. We had recorded a basic demo of the song, and realized that it was fairly disjointed, but reworking the song as a 4-piece finally made it work.

Dead Rhetoric: Finally, any tour plans for the rest of the year?

Sadek: We have Canadian shows lined up for the summer and fall. We’re currently working on ideas for the live experience, and conceptualizing our second record. 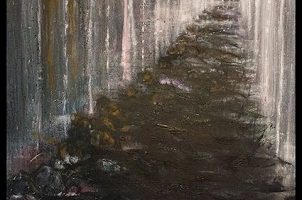 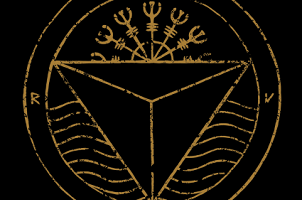