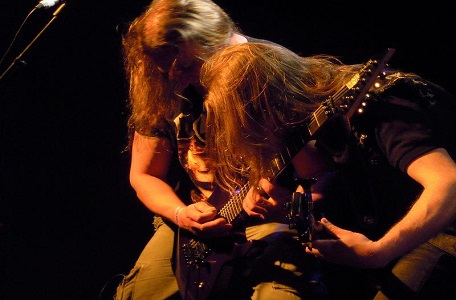 Dead Rhetoric: What was the band’s mindset going into the recording of Digital Lies?

Lord Tim: Honestly, I think we came into it a little bit too soon after taking our break and I don’t think we were all in the best creative mindset to start writing anything, ironically, considering how diverse the album turned out. We definitely had it all in the back of our minds that Set In Stone was probably the first album we’ve ever done that we were completely happy with in every way, from the songs and styles, to the production, artwork… when you’ve done an album that you think sums up the band perfectly, where do you actually go from there? I had grand plans for a ridiculously ambitious concept album as a follow up and I looked around the room and was met with “No. Freakin’. Way.” stares! HAHA! We were still too brain dead to think about tackling something like that. Oddly enough, coming at the album from a different perspective is what got it all working.

I’d been doing a lot of songwriting for J-pop artists and production for non-metal bands in my studio, and a lot of the new album came from me approaching it from the point of view of synths or melodies rather than riff-based like a lot of bands write metal albums. Not only was writing it difficult, but since I was the recording engineer and producer and looked after all of the art layouts and video clips, by the end of it I couldn’t wait to see the back of it. One of the worst recording experiences of my entire career! So it’s funny listening back now and discovering it was actually quite a good album after all, and the reviews are some of the best we’ve ever seen for any of our releases!

Dead Rhetoric: I love the variety on the new album. There’s nothing you guys can’t do, so, what do you think your greatest strength is?

Lord Tim: I think our biggest strength is that we love SONGS. What I mean by that is some bands approach each composition as a collection of riffs, or they’re born out of jams or whatever. For us, even if you take all of the scary solos away, get rid of the guitars and even to a degree you ignore the performances entirely, what you’re left with is still a great song. On our Return of the Tyrant EP, half of the EP was full of stripped back unplugged versions of some of our more popular Lord and Dungeon songs, including some of the more riff-oriented heavy ones, and they weirdly still worked with just four guys sitting in the corner of a room with acoustic instruments, so to me that says a lot about the core song being good.

But apart from that, I think we’re all fans of many different styles of music, not just metal. A good song is a good song, and a great idea is a great idea, regardless of where it’s from or what instruments play it. One of the main things I wanted to do when we made the change into Lord is not feel confined by the fact that we’re a metal band, like Dungeon tended to get pigeonholed into. We’re proud of playing heavy metal but why ignore a cool synth part or decided not to use some kind of non-traditional production just so we fit into what people expect of a heavy metal band? It doesn’t make sense. An open mind is a wonderful thing!

Dead Rhetoric: Lyrically, there’s a strong, positive message in songs like “Digital Lies” and “Point of View.” Are you a “glass half-full band?” Why are you so unafraid to be positive in your lyrics?

Lord Tim: Funnily enough, the song “Digital Lies” is more dark than anything else. On its own, the chorus is really positive but in the context of the song, which is about a dark dystopian future where people are abducted against their will and augmented into cyborgs, the chorus is actually government propaganda that is masking the more sinister truth. We’re not afraid to write positive songs although a lot of them, like “Point Of View,” are more about perspectives rather than just looking at the bright side of life. Life is what you make of it, and sometimes it can be a fairly horrible place. It’s how you look it at and react to it which is the key, and I think that in itself can make a fascinating story.

Dead Rhetoric: We clearly live in a world dominated by technology. Do you believe it’s one of society’s great downfalls?

Lord Tim: It’s definitely a double-edged sword. On one hand, we have the incredible ability to make a video call instantly to anyone basically anywhere on the planet – or even in orbit. That’s incredible stuff that seemed like science fiction even a few decades ago. That same tech is letting me doing this interview with you right now, and letting a band like us run our entire operation ourselves and sell to a global market. What would have cost us $150,000 even 15 years ago to record an album, we can do for $15,000 now. There’s no doubt that this sort of technology has made all of our lives better.

On the other hand, you have things like Operation PRISM where it’s just been revealed that the NSA has been mining ridiculous amounts of data and even recording your Skype video calls without any warrants and in complete secrecy. That is a ridiculous breach of personal freedoms, but the gates have been opened now – there’s no turning back. Like it or not, this is the world we currently live in.

Dead Rhetoric: “Because We Can” is a fun, wild instrumental. What’s the song’s origins?

Lord Tim: Funnily enough, I had the video clip firmly in mind when I was writing the song. Make no mistake, this is two minutes of tasteless shredding written purely so we could do some fun gags in a video and show off our ESP guitars! I think it’s fine to be serious about your music and career but sometimes it’s just good to cut loose and have a bit of dumb fun.

Dead Rhetoric: You’re still considered one of those unheralded, unsung power/melodic metal bands. What are your hopes for the new album?

Lord Tim: It’s already surpassed our hopes for it, in that the reviews we’ve received for it around the world have been nothing short of astounding and since we’ve taken matters into our own hands as far as being our own record label and coordinating our own PR and that sort of thing, it’s actually making us money for the first time rather than us slowly paying off another label in dribs and drabs, that are barely marketing our music at all. We’d like to see it take a more solid hold in some territories, though, and there’s still a bit of work to do with getting the word out, but I think we’re well on the way to making that happen.

Lord Tim: Well, we’ve been on the road since the middle of 2012, and we’ve just wrapped up the Australian leg of the Digital LIVE tour. Next up is South East Asia and Japan, and then that’s it for the year for live shows. We’re already starting to get ideas together for the next album – whenever that’ll be – but the focus is really still giving more push to “Digital Lies,” getting more merch out to help pay for our touring, and to hit some places in 2014 we haven’t been before. Lots of big plans, let’s see if they all pan out, hey?