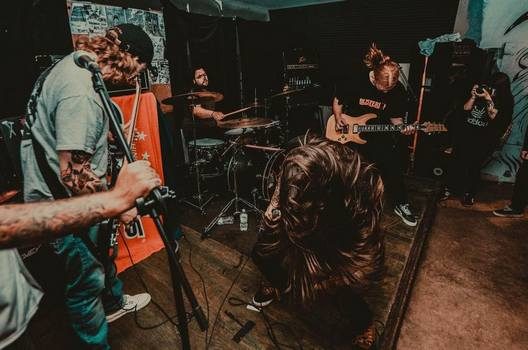 When you think of crossover music that takes equal influences from hardcore, thrash, and modern metal – Utah probably is not the first state that comes to mind as delivering those goods. Dig deep into the sound of Liar’s Tongue, and you’ll discover these gentlemen mean business – throwing down a killer mix of these styles that maintains energy, aggression, and distinction in terms of the songwriting and performances. Especially evident on their most recently released full-length Threat of Intellect – honing a sharp set of tracks that within a half-hour will make people jump, rage, or headbang, depending on your personal preferences for showing excitement.

Reaching out to guitarist Tyler Statler and vocalist Brian Miya, you’ll learn more about the early development of the band, their outside DIY touring they’ve engaged in, some of their favorite bands in the hardcore and metal genres, as well as what the Threat of Intellect means to them in the current world. They’ve got a promising sound that should unite different audiences as one.

Dead Rhetoric: Can you let us know about your musical background growing up, first exposure to heavy music and how you made the progression up from being a fan to picking up an instrument and to begin developing your own original music?

Tyler Statler: As far back as I can remember, my dad would listen to metal bands. Metallica and Testament- he introduced me to both of those bands at a pretty young age. Also, bands like Black Sabbath, pretty much any metal music that dads were listening to back then. I was six years old, so you get the general idea. I was 10 years old, I just started digging through CD’s and plopping in my portable disc player. The first album that got me into playing heavy music in general was Metallica – …And Justice for All. That’s the album I can vividly remember consistently listening to as a child. For me, it opened up my mind to the possibilities with music. I had no musical background. After listening to all these bands that got me into the metal world, I then told my dad that I wanted to get a drum set. He’s like ‘no way, that’s too loud- I don’t want that here’. What about a guitar? That was fine, as he could get me a little practice amp- so on my 12th birthday they took me to the local pawn shop and bought me a guitar for my birthday. Ever since I’ve been playing guitar- the first song I tried learning was “One” by Metallica.

Brian Miya: I didn’t start listening to heavier music until I was 15. I moved to Utah from Las Vegas, Nevada- I started hanging out with Tyler and a few other friends. They got me into it, it started growing on me- they took me to my first show which was Earth Crisis, Down to Nothing, Terror, Sworn Enemy – after then I was hooked. I loved the energy, and I started going to lots of shows after that. I was always fascinated with the energy, the vocals, and I wanted to front a band. But I never had the opportunity, then Tyler ended up wanting to start a new project. I wanted to try out, give it a whirl, and it ended up working. Tyler and I end up writing really well together – that’s how we got started with that.

Dead Rhetoric: What can you tell us regarding the formative times of Liar’s Tongue? Did you know each other from previous bands in the local scene?

Statler: Before Liar’s Tongue, I played in a few, smaller bands that didn’t really go anywhere. The last band I was in was called No Empire, somewhat along the lines of Liar’s Tongue but just not as groovy or riffy. It was more along the lines of a metallic hardcore sound. We played a fest in California called SoCal Slam that was really cool. Brian and I have been best friends since we were 15, I’m a year older. He’s known me from all the previous bands I was in. Moving to Utah, we live not that far apart- maybe five minutes away. He approached me, let’s start writing some music now that No Empire is not around. From there on, we jammed with a different lineup. I had been playing music with a different person at the time, forming Liar’s Tongue around May of 2014. We would just jam every now and then- we tried out Brian on vocals, and then things developed from there.

Dead Rhetoric: You recorded your debut EP Life in Exile in 2015 – what can you tell us about the songwriting and recording process for this effort? How do you feel about the final product, and what takeaways/learning experiences did you have as a result?

Statler: We started the band in early 2014. The goal was… we originally started as a three-piece, which was interesting because the person who was playing bass was also going to be doing the vocals. We went through a few lineup changes in the beginning. It didn’t really stick until about the middle of last year. We wrote the first EP throughout the end of 2014 into 2015- we got these five songs down and we played our first show in New Mexico. About a month after that, we recorded that EP in a basement with our buddy. We sent it off to a friend of ours in Arizona, his studio is Solar Sonic. He did the mixing and mastering on it- it was a good first EP. At the time we wanted to get our music out there, we wanted to show people what we were working on. As a band, I feel like we have progressed since then. The songwriting for that EP, it wasn’t rushed but after releasing it, we got a decent response off of it. We did three tours in support of that EP, honestly it was a phenomenal time when we went out. I feel like it was a good start for the band. It was a fun experience to get our foot in the door.

Dead Rhetoric: Over the next year during late 2015 to 2016, Liar’s Tongue played many regions of the Midwest, Southeastern, and West Coast dates on tour outside of your native Utah. How do you feel these shows went, and how would you describe the band’s outlook and philosophy when it comes to your live performances?

Miya: Those shows- we just released that EP. We were just trying to get on the road. It was a grind, we wanted people to check out our live performance and get people to listen to our music. People hadn’t really heard of us at the time. The shows had decent turnouts, especially for people not knowing who we were. The first run was with a band called Purgatory.

Statler: When we did that tour with Purgatory, we didn’t know what to expect. They had played Salt Lake City, and it was earlier on in their touring career. They’ve been grinding away, they’ve become a cool and respected band in hardcore. They’ll always hold a special place in our hearts. After doing that, things started to pick up for our band. Going from that run, we had good reactions from everyone that came out to the shows. As we’ve played more shows, the reactions were better, people are becoming more familiar with Liar’s Tongue. Especially the last tour we did with Easy Money and Dismal Drainback during last September, the reactions were awesome. We had a lot of fun on that tour.

One thing we hear on the road is how tight-knit our band is. How the energy from our performance makes the audience excited to watch us. My main thing is with my live performance is I want people to feel like they are getting a performance, rather than someone just playing a guitar. I want to give somebody something to say, ‘wow, cool- the energy is there’. Watching a lot of bands playing live, it’s one of the things I notice- and friends have told me in the past that I haven’t always been the wildest guitar player on stage. You need to give better performances. I like that people critique my performance, as I can do better and it inspires me to do different strategies of how I perform live.

Dead Rhetoric: Threat of Intellect just came out as the latest Liar’s Tongue full-length. Where do you see the greatest differences between your EP and this effort?

Miya: I would say first off the quality and the production of it. We went from a basement to going into a studio and having someone really good mix and master it. Arthur Rizk did an amazing job on this. We’ve all progressed musically since then- we are better at our instruments, lyrically I put a lot of thought into this. I wanted to take more of a political stance on this album. I spent countless hours on my lyrics – (I was) very particular in how I worded things, the patterns.

Statler: Additionally, I’d like to add, as far as the writing goes – with our first EP, we didn’t rush things but we didn’t put as much time and thought into that EP as we did Threat of Intellect. We switched up the songs- we tried multiple ways of structures. With this album as opposed to the EP, we took our time into making the songs as perfect as we could. We didn’t want to be missing anything. Just under thirty minutes, it’s not too long and it’s not too short. We wanted the songs to not be overbearing or bore people with it, we wanted it to be diverse. The songs mesh together but we’ve progressed, a major step forward. The response that we’ve received so far has just been really humbling. We’ve been working on this album for over a year- a lot of these songs I actually wrote in 2015. I’ve had something new to put out for a long time, it’s gratifying to have these songs out. 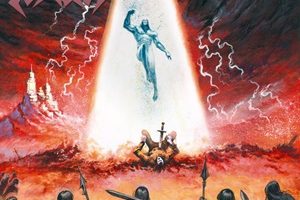