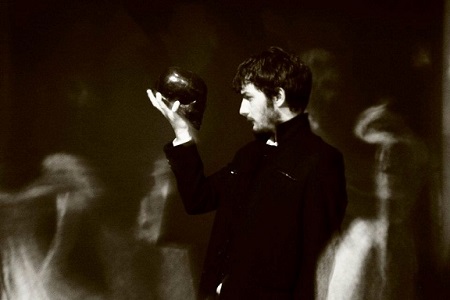 Blistering.com: The working relationship between you and Audrey seems to be really effective.

Teyssier: We aren’t working so much, but we are a couple for a long, long time [laughs]. That’s what makes our connection so deep. She always inspires me for what I’m doing and gives me very good advice on my work whether it’s editing or illustration. She’s very honest and when I do something bad, she’s not afraid to tell me it’s not good. She’s a very good partner…she’s given me a lot of inspiration and self-confidence as well.

Blistering.com: Switching gears, are you able to do your film and illustration work full-time?

Teyssier: My main work is to do films and illustration. The music is on the side and is a blessing in my life and is very important. I don’t get any money from music, so it’s really not a job and I don’t want it to be a job. My job is really to make movies and drawings for bands and commercials.

Blistering.com: What’s the criteria for you to take on a project? Do you have to like the bands you’re working with? You did some stuff for Morbid Angel last year and you don’t strike me as the type that would be into them.

Teyssier: Not always. For Morbid Angel, I’m not really into their music. I did something for them because a friend

of mine was commissioned to their artwork and needed a drawing and the other guy was not a drawer. So he asked me and we worked together. But I don’t like Morbid Angel at all, absolutely not the music I like. Usually for most bands, I don’t remember one band I worked for that I didn’t like. Most contact me and tell me they like my work and ask if I could work on their next album.

Blistering.com: There’s a cool little circle of bands you work with like Alcest, Lantlos, and Arctic Plateau. I would imagine you’re friends with all of them, right?

Teyssier: Definitely. For most of the bands, I’m almost always friends

with people in which I work. It can be before I’m working with them or they ask me to work and during the work, we become friends. I think the area or lifestyle we have, it’s a really small world. I think it’s easy to make relationships with people, especially when they appreciate your work, so you know there already is some friendship that is there.

Blistering.com: Growing up, were you a drawer or were you into music first?

Teyssier: Oh, it was drawing, definitely. I was eight or nine, I think. I really understood that drawing could be and I asked my parents

that I wanted to be a drawer, not a fireman, or policeman, or many other things. They really supported me and paid for me to go to school and it’s great because I’ve been able to do exactly what I wanted. My parents were always supporting me. I think when I was 16, I had two choices: Buying a motorbike or buying a guitar, and I chose the guitar. This is how I got into music.

Blistering.com: You’re already known for your work on the new Alcest cover, but how about someone like Arctic Plateau? What was it like working with Gianluca [Divirgilio]?

Teyssier: It was a long time ago, I found them on Myspace. I fell in love with the music and the feeling the music conveys to me; the vocals, I love Gianluca’s vocals. I sent a message to Prophecy [Les Discrets’ label] saying to check this guy out because he’s doing some very good music, and they signed him. In a way to be thankful to me, he proposed to do the first album cover art [On A Sad Sunny Day], which is what I did. We met a few times and became friends, talking on the phone.

Blistering.com: What do you have going on with your film work?

Teyssier: Many, many things. Big things for me and my career, which are happening now. Starting next week until August or September, I’m working on animated film, everything in black and white that takes place in Berlin, Germany, just after the war. We did the kind of cinema that I have wanted to for a long time. It’s in black and white, with a little bit of red. That will wrap in late September. Almost straight after, I should be working on films for French cinema. I’ve been contacted by a production company that asked me to be the director for this film, so that will take two or three years. There’s a lot of people involved, like 200 or 300 working together with me.

Teyssier: Oh yeah! It’s a very big production and I’m very, very happy to be contacted to be the director of it. The production company still has to find some funds to complete the work budget but that should be fine since it’s quite the big company. It’s a good situation to get into.

Blistering.com: What makes you more nervous: Playing live or someone watching one of your films?

Teyssier: Live music [laughs]. I’m only stressed when I don’t enough self-confidence. In the past on tour, I wasn’t comfortable with the idea of singing live and playing live, but after the tour, now I know the band sounds quite OK. It’s far from being catastrophic. I got some good feedback, so I have a little more confidence. But yeah, the thing that stresses me the most is music. Not animation or films at all – I’m very confident at what I do, but I know I cannot do better because I’m always doing my best.