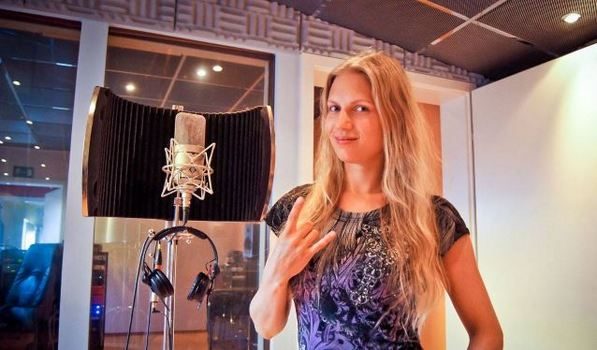 Dead Rhetoric: Elina, you had mentioned earlier that you had kind of a different vocal style. Did you have any training in singing in the way that you do?

Siirala: I have a degree in classical music from Finland. I also studied for a year in London – I still live there now. So yeah, quite a lot! You can hear the classical training in my voice. It’s always been there and that’s kind of essential for my technique.

Dead Rhetoric: So what made choose to go into heavy metal instead of something else?

Siirala: When I moved to London, I was doing this course for a year and I really loved rock and metal. I loved performing it, but I thought my voice was never going to suit that. It took me a while, and I had a difficult time in my life. I just started writing some music and made it a bit heavier. I wanted to write something for my own voice and started my own voice. That’s how it started.

Dead Rhetoric: At this point, with a rejuvenated Leaves’ Eyes, do you have any long term goals or are you just enjoying the moment?

Krull: We have long term goals. They were always there – that was the thing with talking with Elina. We didn’t want her to jump in and have it be an in the moment thing. We plan ahead for years with releasing albums. Like Elina said, from the album release it’s such a huge amount of time planning ahead. You can’t just go for the moment. The record company needs months to set everything else. If you have a major release, they have to plan ahead and spread the name. We want to improve everything – from the band, the music, and the label work. Promotion goes hand-in-hand, working great with AFM Records, by the way. It’s not something where you can go, “oh I forgot something.”

With the music, for the spontaneity – music is always in motion. It’s connected very much with body and soul in a way. It’s not only about, “we have to do an album so we’ll write some songs.” We’ll take the time. Even the label said, with you guys on the road so much, with tours coming up…we also have offers for North America – it takes longer to write. You need some [personal] time as well to not make pressure on yourself. Something like we just did in Belgium, with the Viking ship and 40 people involved on the production alone, with all these effects and fire on stage – Vikings and animation through the whole set. There was a lot of choreography – it was more like a Wagner opera of heavy metal going on. This is something we would also like to work on in the future and plan things ahead for big, open air festivals. We did something like that before in Wacken and we’d like to do more of it in the future. You have to plan ahead, and it’s also a responsibility, it takes a lot to afford a show like this. It’s different from touring.

Dead Rhetoric: With that show in particular – was there any plan for a DVD or anything like that?

Krull: It was filmed by a professional team. There are some rights with the old record companies so we have to sort things out. But there will be a new album, and maybe there will be a connection to this. It would be very cool, because it went very well. People who were watching were really blown away.

Dead Rhetoric: With the controversy that was stirred up, was there a sense that people didn’t quite grasp the size of the role that you [Alex] played in the band, or your involvement with the lyrical concepts/production/etc?

Krull: We are always involved in the music and the lyrical concepts so we want to keep going with that of course. I just think, when you are in the music business for a long time, and you see in other bands too, that people work more in the background that you think. It’s not like its one person doing everything [laughs]. I understand – if I think back, I remember there was a band called Iron Maiden. Suddenly they had a new singer, and I was a die-hard band back then. This guy was called Bruce Dickinson, and I was like, “who is this – it’s the Samson singer. Okay…does it work?” Then The Number of the Beast came out…I don’t have to say anything about that right [laughs]? It’s a good example I think. On the other side, I still love Killers the most!

So I understand if people stick to whatever their favorite album is, because music is often connected to private life. Maybe you met your first love and you found Leaves’ Eyes, or you had a bad time and the music helped you, or you were just in a certain phase of your life and you were really into the band and you have great memories. That will always be there. But for the future, maybe the best thing is still to come.

Dead Rhetoric: With your short stint in the band, Elina have you had any memorable fan interactions since you joined?

Siirala: Well I think they are all memorable to be honest. There was one guy who almost pulled me off stage [laughs]. I didn’t fall though. It’s just nice to meet people. I guess, for me, it was a little bit daunting, because I wouldn’t know how people would react, but everyone has been really lovely and nice, so I’ve been very grateful for that. Like Alex said, I completely understand that some people obviously don’t like the change, or they prefer Liv. For me as well, I prefer something to someone else – but I don’t think it’s a problem at all. The personal attacks are sometimes a bit unnecessary, because it’s not about that. But I understand – people are passionate. It’s more positive than negative, at least for me and what I have experienced.

Krull: We went out and played, and we let the music talk. A lot of people want me to say something or react – we are a whole band. It’s not like I sit there and do all of our social media – I was thinking it was better not to say much more, like I said, as I want to protect my son. What I don’t understand, with the whole thing – when you do a statement together, and also Liv’s lawyer was even writing before we parted, in a statement that she wanted to leave the band. It was written in a statement together, and then suddenly the opposite came out. I don’t understand people believing it – I don’t’ believe in fairy tales, sorry. Why would you suddenly come up with this? The fact that we were writing and saying please, there’s family [involved] – my son. We don’t want him to read anything bad about his parents, of course. So we wanted people to respect our privacy. No one gave a damn, of those people. And what we found out, which is really disgusting, is that there are these hate groups that like to make these snowball effects – like Arch Enemy, Guns N Roses, AC/DC, Nightwish – all bands changing singers – they jump on the train and start the fire. We had no clue about these things.

It’s not like fans writing angry things and spreading hate, it’s organized. Its like, don’t they have other things to do? It’s enormous, we found out. We had to block people because they were just there to spread hate – trolls and stuff like that. It wasn’t fans or people that even buy our music. We were in Indonesia, having a great show, and suddenly we had people telling us that there was some madness going on [on the Internet]. I understand being sad, after the statement came out, because Liv was not there and people were big fans of her voice together with Leaves’ Eyes. I understand that very well – it was not something we forced or wanted to have that change.

But now we have that, and it’s all going for the good. I don’t understand the hate/jealously…just psycho stuff. The “I have to write something now”…It’s just guessing everything. There were rumors going on about us [Elina and I] being together and shit like that. It was absolute madness! I have other things in my life and so does Elina. I have to take care of my family right? Just to start something new in this situation. It’s really ridiculous. What I heard from most people, they were all saying – it’s a privacy thing and we respect that. But some people, they think they know and that they have to write something. Those people were spreading bullshit around and it’s ridiculous.

Dead Rhetoric: So we’ve discussed your touring and writing plans for the future already – anything else you’d like to mention?

Siirala: A huge thank you for the interview, and it’s great to be back in the States, and we are looking forward to the rest of this tour and seeing all the fans and having great shows.

Krull: It’s amazing to be back in the States, and always believe in true music, not fairy tales.