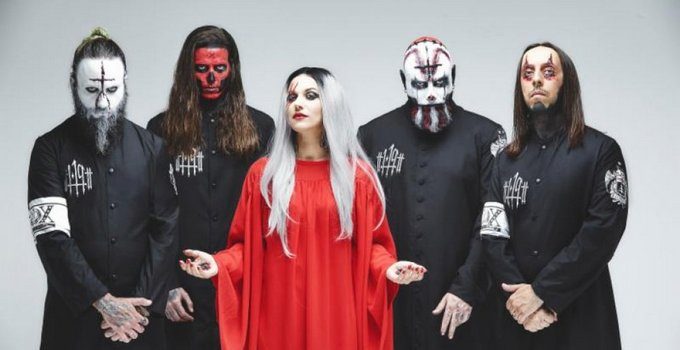 With over 20 years in the scene, Lacuna Coil have been having a bit of a celebration as of late. To mark the occasion, they went back and wrote a book [Nothing Stands in Our Way], as well as performing a small number of 119 shows that spanned the band’s discography. Bringing us to 2019, they have yet another reason to celebrate as they have released their latest album, Black Anima. Continuing the band’s signature gothic sound, albeit one that has continued the heavier progression that the band fully dipped into with Delirium in 2016. The band is still very much hungry and on top of their game. We spoke with vocalist Andrea Ferro as they were on their most recent US tour, to talk about their past, present, and even a bit of the future.

Dead Rhetoric: What do you recall about your earlier days when the band was first getting together?

Andrea Ferro: When we started, it was basically Marco [Coti Zelati] and myself. We were skateboarders and just playing in our spare time. We couldn’t really skate because of the weather, so we decided to play music and just cover the artists we were listening to. Then we slowly got more into music, and we eventually met Cristina [Scabbia] in a metal bar where we used to hang out. We knew she could sing, because she had been doing some session work for some dance albums, but she never wanted to be in a band. We asked her, because we really liked her voice, if she wanted to do some background vocals on our demo. We really loved the result, and she also fell in love with our music. We all started to collaborate together and play music – we started combining the male and female vocals together. It was something a little bit unique back at that time.

It was 1996 when we were doing our demos. It really worked out well. We loved the dimension that her voice added to the music. So we asked her to be a part of the band. We sent the demo out and got a contract – then we started touring with bands in Europe. We had some growth for the first album, then the second album did a little bit better. It was Comalies that really brought us to a wider audience. So we did the classic career for the band in the mid-1990s. That sort of pathway for bands doesn’t really exist anymore today.

Dead Rhetoric: Does it get tougher to try to bring something new in with each release, in trying to please yourselves as well as being aware of your fanbase?

Ferro: Yes and no. Obviously we have done a lot of music and we have found our style. It’s very easy, in whatever direction we take it, we feel its going to sound like Lacuna Coil in one way or another. In general, we are very passionate for music, and we still listen to a lot of new bands as well as some of the more classic ones. We don’t put any limits in terms of where we can go in terms of inspiration. We really have a good time writing. When we realize when we are writing that we are going towards something that we have already done, we kind of step a little bit back out of it. We don’t want to really repeat what we have exactly done already, although like I said, we do have a style that has been developed over 20 years. We try to keep things as open as possible, and we have a great time when we create music.

Probably now, we are more aware than in the past, and are able to put more of our feelings into the songs. The lyrics are more coordinated in terms of being tied into the music, as opposed to the past. We didn’t know how to write the lyrics as well as we do now – sometimes we would just put some big words or complicated [concepts] in just to make it sound interesting. But I think from the 3rd or 4th record, we have been able to more fully express ourselves correctly and make it count. To really make the lyrics as strong as the music.

Dead Rhetoric: With the book [Nothing Stands in Our Way] and the special 119 shows, did looking back at your entire career impact the way you wrote for Black Anima?

Ferro: I think that last year, when we did those two things, it was really the first time we stopped and looked back. It was somewhat forced, because we had to get some pictures [for the book] and think about things like who was taking the pictures, where we were and what tour it was. We also looked back at some of the interviews we did with journalists – a lot of memories were coming up from different sources. When we did the 119 show, we started with 80 songs and had to cut it down to 25 for the actual show. We did a lot of going back and listening to decide what we could rearrange, what we hadn’t played before, and which songs made sense in the setlist.

So there was a lot of brainstorming about the past, so in a certain way, it could have influenced the Black Anima production, because I think some of those songs you can find some flavors that could be an updated version of moods that come from In a Reverie or Comalies in there. It’s a different record, and it’s one for 2019. But I think if you analyze it a little bit, there are some atmospheres that could bring you to our past history, and that’s probably unconsciously coming from the brainstorming we did [to celebrate 20 years].

Dead Rhetoric: You mentioned getting better as a band in the lyrical process. Is there anything that you can speak to specifically about the new album with the lyrics?

Ferro: In general, when we started, Cristina and I, we were brainstorming and trying to find out what would be the strongest thing to talk about. We usually start with personal experiences, at least as a starting point for the songs. We talk about what happens to us in the lyrics. So we were searching for the strongest impact of the last three years [since Delirium]. The strongest thing that happened was the fact that we had been losing some dear people and the way that we have been reacting has been very surprising. It’s nothing that we have ever imagined before. This passage of life, which is natural for everyone to face sooner or later, it was one of the strongest impacts we had. Especially how much we still feel these people around us and inside us in everything that we do. So that led us to talk about a topic of using this connection between our world and [another] world.

I was also reading a book called The Physics of Angels, which is written by a priest and a scientist. They both analyze the physics of angels, ghosts, and spirits throughout history. That together lead us to this concept of black souls, which you can see on the cover. It tells all of the stories of the spirits. We also have Tarot cards decks, which we use to communicate with the spirits. We also imagined the stage clothes would be something like ‘soul hunters’ or something like that. All of a sudden, we opened up something much bigger to work with Marco on the music. So it’s been a work that came altogether with the lyrics, then moved onto the music, as well as everything like the live clothes and scenery, and the merch. Everything was connected. It’s not a proper concept album in that it is one unique story, but the approach and theme is common.

Dead Rhetoric: Could you discuss the importance of the relationship between yourself, Cristina, and Marco as the backbone as the band at this point?

Ferro: Yeah, we were the only three people who are still here from the start, so we are the backbone of the band, even though everyone has contributed to the project. The other guys have had many years with us, and have contributed musically and personally to the touring and things like that. So it’s not just our project, but a project of different people. But we have been the core that is responsible for most of the lyrics and the music, and the vocal lines. That hasn’t changed much over the years, but now it’s more that the three of us have more total control, where before there was more compromise with the other guys. We now feel we have enough experience that we feel we know what we need to do for the band, just the three of us, in terms of decisions.

Dead Rhetoric: What are a few songs from the band that have held a special meaning to you over the years?

Ferro: To be fair, we’ve always been using our personal lives for the lyrics so all of them feel personal. Some more to Cristina or some more to myself, so there’s not really a specific song that has more meaning to me – they are all personal up to a certain point. But there’s one song on this new record that I feel, because I wrote it from a very personal experience, but it’s not more important than the others. It’s called, “The End is All I Can See.” For me, it has a deeper meaning but in general, there’s not one song that I’m particularly attached to.

Dead Rhetoric: You mentioned about stage clothes earlier – do you view them as something that enhances the live show?

Ferro: Yeah, for us, it’s like a theatrical performance so the costumes are a very important part of it. Not saying that it should be the same for every band. But it goes together with the music and the full package of stage props and choreography. It’s a special moment when you are on stage and presenting/introducing people to your environment. You want them to be as into it as possible, so for us it’s a really good way to perform in an intense way. It’s also fun to design costumes and change them along the way. You make changes here and there before the next tour. It’s very cool to also have that visual aspect to compliment the music well – it’s quite an important part of the show.

Dead Rhetoric: What’s next for the band over the next year or so?

Ferro: We are finishing our North American tour, then we are going straight into a European tour until Christmas. Then we will have a little break then we will have some more touring that we will announce soon. So it’s mostly touring, but there are a few surprises. For example, on Halloween this year, we are going to present, at the biggest Italian comic book convention, a special box set that we did with DC Comics. It is coming out for the 80th anniversary of Batman. There will be a special limited edition box set that features certain Batman items as well as Lacuna Coil items. Plus, we will be included in the story of the special graphic novel. We will be on the cover, and in the story, which was designed by DC Comics. That’s going to be very limited, but we will be there for some meet & greet as well as a panel to talk about the collaboration. There will be some more surprises that we cannot announce quite yet, but there are more coming!