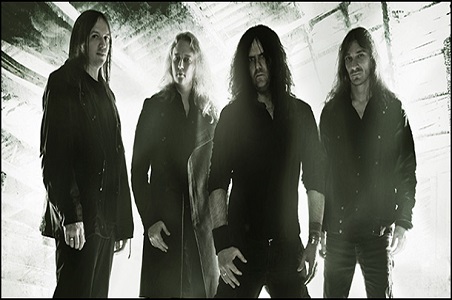 Dead Rhetoric: Speaking of changing sounds, coming off the Coma of Souls album which was your last “traditional” thrash album, you went into Renewal. And if you think about it, you were step ahead of everybody because it’s slowed-down and mid-tempo. Were you thinking that far ahead, or did not you have the will to make another Coma of Souls?

Petrozza: It’s a mix of everything. When I look back on it, we got into this treadmill. When we started, we started as 16 or 17 year-old teenagers, and in the timeframe of five years, we released five albums. Every year an album, every year a tour. We told our record company that we didn’t want to do another album, that we wanted to wait a year and experiment a little bit. And that’s what came out. One thing I can admit is that I’m not really happy with the production of Renewal. It could have sounded better. The sound is strange. That was also because of us because we told the guy who mixed it, to mix it like that. We wanted a unique, unusual sound.

Dead Rhetoric: When you got through the 90’s and into Violent Revolution, did it feel like it was time to do another thrash album? And as you know, people were skeptical of you doing something like that again.

Petrozza: I didn’t really pay attention. I think the main influence – it sounds strange – we were on tour with Witchery in Europe. [Haunted guitarist] Jensen would play us the version without vocals of The Haunted Made Do It, and that was all we listened to on the tour bus. We were like, “This is amazing. I can’t wait for it to come out with the vocals.” That was the inspiration because we were like, “Wait until you hear our new album!” [laughs]

Dead Rhetoric: That’s funny because those Swedish bands like The Haunted, Dark Tranquillity, and In Flames will all say they’re influenced by Kreator, but here they are, influencing you.

Petrozza: Right! I sometimes don’t like when people say that. When I read reviews online or in magazines, they say “They use those Swedish death metal riffs.” I’m like “No! We were doing that before.” Those people didn’t do their homework. If you ask the guys In Flames, they’ll tell you the same thing. I sometimes get a little…not frustrated, but I could punch the guy in the face. [laughs] Whatever. It just makes those guys look stupid that they didn’t do their homework. If you call yourself a journalist, you should dig a little deeper.

Dead Rhetoric: With the Violent Revolution lineup, was that the first time in a while that you had a sense of stability within the band? Before you had Tommy T. Baron [real name: Tommy Vetterli, also of Coroner] in the band, and everyone expected something different out of him. What was the contrast between the two lineups?

Petrozza: I think the time with Tommy was a little different. I think he just quit Coroner. He’s a band leader, and I’m a band leader, so it didn’t work. [laughs] But he helped me with these two records and I still like the guy. He’s a great guy and I learned a lot from him, but I also learned I can’t have another guy in the band like that. It’s not that I have a big ego or anything, it’s just that I know what I want and Tommy knows what he wants, so it’s better we not be in the same band.

Dead Rhetoric: That would be interesting to hear, though. Tommy’s idea of thrash with yours.

Petrozza: Tommy has a totally different technique. There’s a couple of songs on the Endorama album that he wrote and he played all the guitars. I couldn’t play them.

Dead Rhetoric: Was that first in your career where you didn’t do guitars on a Kreator song?

Petrozza: [Nods] Yes. There was this one song called “Shadowland.” I didn’t play guitar – he wrote the riffs. That’s also one thing that I figured out is that “Is this still Kreator?”

Petrozza: Exactly. At the time, he liked thrash metal more than I did. It was an exciting time, though. We were working at his studio in Switzerland; it was a really great time. He was a nice guy, always supportive. I wish…I don’t wish, actually. Sami [Yli-Sirnio] is the perfect fit for Kreator.

Dead Rhetoric: Is this going to be another two or three year-long touring cycle? No new album until 2015 or 2016?

Petrozza: Yeah. I do see it going that way. I need inspiration. I know some bands who I really respect, but they put an album out every year. A.) I’m not that productive; and B.) If I were to put an album out every year, I would have like, two good songs on every album. Nope. That’s not the way it works. Music, as an individual and as a musician, you need time off to be inspired again. You need to go out there and live your life. Don’t get me wrong – I love being on the road and being in the band and playing for the people, but I’m in a bubble – this isn’t reality. This is different. When we get home and have a year and a half off, or even three months, that’s when I start picking up my guitar again. This is when I get inspired. I read some books, and watch some movies.

Dead Rhetoric: Wrapping up, the next 12-18 months, what do they look like?

Petrozza: Touring at least for the next year. We already have stuff scheduled for 2014, and we know we’re going to do a big tour in Europe at the end of 2014. There are festivals coming up…maybe come up with some concepts for the next album.

Petrozza: It’s not very good, so I doubt it. [laughs]