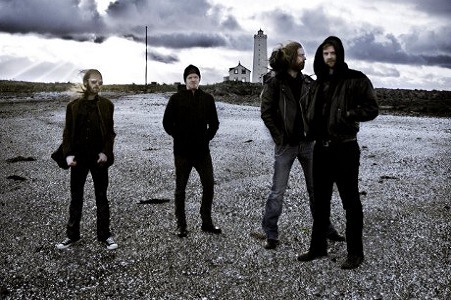 Seeing a new scene based off geographical location start to bloom…it’s quite exciting, frankly. The creative output here in the States and abroad has yet to wane (and probably never will), but getting fresh sounds and a different view on metal is generally an intoxicating shot in the arm. Next country up? Iceland. The country has may be without its breakout band at the present time, but the two-headed monster of Sólstafir and the band in question, Kontinuum are enough to provide ample momentum as we bandy about 2013.

The band’s Earth Blood Magic debut (Candlelight Records) is a mature offering of post-black metal, rounded out by atmosphere, daunting melodies, and adventurous song builds. It’s wholly digestible, while at the same time, pushing the envelope, something that might have something to do with how Icelandic metal is created. Guitarist/vocalist Birgir Thorgeirsson offers that the fickle nature of the Icelandic metal scene lends to no creative boundaries…whatsoever.

“The popularity of the metal genre goes up and down,” he begins. “There was a death metal scene, hardcore, black metal and today there is a mix of things. I think we have never had as good a scene as today. Some bands have received a lot of mainstream attention even. We have a few bands that have made a name for themselves and managed to get some serious attention such as Sólstafir, Skálmöld and HAM. We have a diverse scene and I get the feeling that there is no obvious scene direction. Anything goes and young bands are ambitious seeing that you can get some international attention from the wider metal scene, even though you’re from an isolated ice bucket of a country.”

After spending their formative years as Pornea (“The question ‘are you a porn band?’ was predictable and annoying,” laughs Thorgeirsson), Kontinuum came to formation in 2010. The band’s lineup consists of three members of the vastly underrated Pontentiam, as well as Changer and Thule. “I have friends in different bands which like different music,” notes Thorgeirsson. “That sums up my mentality towards music and the need to listen and enjoy diverse landscapes in music. The scene here is made up of passionate people that usually cannot support themselves on their music alone. It’s the passion that unites us and the sacrifices made that only those people understand, be it in metal, indie or electro. Because of that and because the place is small, it’s usually quite easy to get access and assistance from people. Musicians here are usually very willing to help each other out, across genres.”

While international metal interest in Iceland isn’t quite at Finnish or Norwegian levels, according to Thorgeirsson, the idea that the cold, barren landscape of his home country and metal as an interwoven concept that is supposed to bear the fruits of each other is a tired concept, and something Kontinuum doesn’t have much to do with.

“For now, this image has helped bands in my opinion but in the long run, it’s gonna get tired. Bands decide how they want people to perceive them and what they say. So it’s up to them. Right now, people are interested in Iceland; you can just notice that in the increasing amount of tourists in the streets too. Down the line I think music will still be deeply rooted in the culture here and you will have new interesting bands appearing without the old fairy landscape branding. Because quality music is not created in the rivers or mountains, but the creative people here.”

Earth Blood Magic has a rather sizeable post-metal and atmospheric scope, coalescing into weighty songs, chalk-full of dynamics. “Moonshine,” “City,” and “Strange Air,” all get nods as songs provoking a different kind of mood and temperature. For Thorgeirsson, having absolutely no creative boundaries was at the heart of the album’s creation.

“Partially we wanted to question the audience and see if there were more people like us out there,” he notes. “It was best not to expect that and take on the fuel for our musical sacrifices, time and effort from another source than peoples praise and acceptance. We found that in some sort of a strange musical spirituality, a connection we found with our music I cannot really explain. That became a purpose of its self. We are old enough to realize that life is too short to do anything else than exactly what you want.

“We look for that haunting qualities and vibe that takes you places,” continues Thorgeirsson. “What seems real and genuine to us. We are expressive and our music is a sense of personal outlet and necessity. We lay down ideas and work with them quite a lot. We may completely take a song a part and make tons of different versions. Work with the arrangements and what instruments are used. We are listeners as well as musicians, we have a need to be surprised and taken new places as music lovers ourselves.”

The band’s three-guitar setup may pose some interesting scenarios in the live setting (“[It] took us a while to rehearse as a 3 guitar piece”), but Thorgeirsson said live activity should be a-plenty heading into the summer, where the band will play in and around their Reykjavík locale. Their first gig outside of Icelandic territory will be in London in August, not to mention work has already begun on album #2.

“We are secretly and quietly working on new stuff,” he concludes. “We have a lot of ideas on the table. Mainly we want to establish our live performance. We have a video coming out for ‘Moonshine’ this spring, we will do a lot of shows, connect with our fanbase and hopefully find time to record late 2013.”