Kobra and the Lotus – Priestess and Prophets 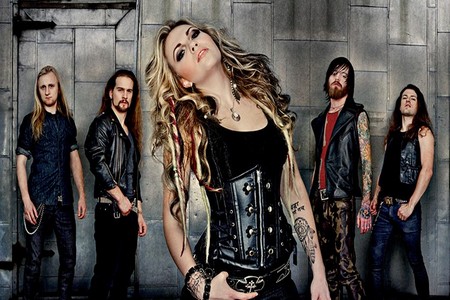 The Great White North… land of ice hockey origins and a passionate metal following. Many a band from around the world loves to lock onto those Toronto, Montreal, and Vancouver tour slots – and quickly discovering that there’s a wealth of talent in other regions too. Take Calgary’s Kobra and the Lotus – a traditional heavy metal band carving out quite a name for themselves through their three full-length albums and long touring excursions that have seen them play key festivals like Bloodstock, Graspop, Hellfest, and Wacken beyond tours with Fear Factory, Hate Eternal, Def Leppard, and Kiss.

Their latest EP Words of the Prophets reaches back into their childhoods to a time when classic rock ruled the radio airwaves. Choosing 5 artists from their native Canada, you can feel the energy surge and good times pour through the speakers as Kobra and the Lotus pay homage in reverence, and possibly give their generation new reason to seek out some of these original artists.

Apologetic from the start for her lateness in our scheduled late afternoon chat (understandable given the outlets that want an interview), vocalist Kobra Paige handled the questions with the same grace and charm as her voice brings to the band. Topics ran the gamut from plyometric exercise for keeping the voice in tip top shape, learning from legends like Vivian Campbell to Rik Emmett, and her recent frustrations regarding how haters view the internal workings of her band that is still climbing the ranks – plus a healthy amount of talk regarding the records and tours of this fine heavy metal act.

Dead Rhetoric: How did the idea to cover five different Canadian artists come up for your latest Words of the Prophets EP? Did you banter about with the band favorite choices?

Kobra Paige: Actually, I picked all the songs because there were specific reasons for why I picked each one, nostalgic and they all had special places to me. I wanted to do an EP of classic rock songs because it’s what really started music for all of us in the band- it was classic rock that we first heard when we were kids. It’s feel good music and it has so many cool elements in it, we don’t really get to show a lot of these elements in our band, including the vocal harmonies we can do. It was just really fun to do that and pay tribute to some of the great people that have come from Canada.

Dead Rhetoric: Was it a challenge to sing stuff like “Lay it on the Line” from Triumph, Rik Emmett’s range is pretty high on that one? I also love the choice of April Wine’s “Sign of the Gypsy Queen”, a lot of people in America don’t know much about their work past the hit ballad “Just Between You and Me”…

Paige: Ah yes. The song that I had the toughest time with was actually “Black Velvet”. I really loved (Alannah Myles’) delivery of it, it really intimidated me to sing it. Otherwise, the other stuff was in my range. Rik has a very high voice, I must say that. That range he’s in is super demanding and tiring. Geddy Lee’s voice is exactly my range, so it was very interesting to do “The Spirit of Radio”. It was fun for me to get to try different things out with my voice.

Dead Rhetoric: On your Facebook page you recently expressed your frustration over haters who attempt to assassinate your character over member changes that take place within Kobra and the Lotus. The floor is yours to further elaborate on this ignorance from particular followers and the challenges of keeping a metal band active and trying to sustain any sort of living, money-making venture at this…

Paige: I usually don’t express myself in that way, but it just became too frustrating. There were some specific comments that made me just say enough was enough. I had to say something – no one unless they are doing this actually understands. It’s really hard on me every time I have to change a member or worry about that, or worry about how the band is going to move forward into the next tour. You can’t stand still if you hit an obstacle. It’s really brutal to see some attacks on my personal character that had nothing to do with member changes. I treat my people with the utmost compassion, and so when I saw something that had to do with my personality, just being like ‘I bet she’s like this…’, I said that that was enough. No one knows the level of bullshit that happens in this industry, the level of crap I have to go through because I want to do this so bad. So I just put it out there and put it back, and not to take anything from our fans they are so amazing, but for the people who have been negative… to say to them up yours if you choose to be ignorant.

Dead Rhetoric: Completely understandable. I would imagine part of the problem too is being a female, they feel they have the right to say those things even more.

Paige: Some of the things that happen because you are female, I don’t even pay any mind to. It’s just the nature of how it is. Even the way a woman looks is subjected to certain things. It’s kind of unfortunate, but at the same time I can’t complain because I think there has also been benefits to being a female.

Dead Rhetoric: How did it feel last summer to gain the chance to open for legends like Def Leppard and Kiss across North America? What takeaways did you learn and apply to Kobra and the Lotus?

Paige: Oh man, that was one of the most incredible experiences of my life. Those guys were so great to us- especially Def Leppard would come down and talk to us, tell us stories about their struggles. They were telling us to keep going, that you guys have to keep powering through. They were telling us about times when people didn’t like them so much that they threw bottles of piss at them at shows, and it was stuff that I’ve never even been through. And also just seeing their level of musicianship every night – seeing those guys singing and just being spot on. Vivian Campbell, who is an inspiration to many of us, being sick as a dog, fighting cancer and fighting for his life, showing up every night and the people that came for a show. He would be so sick that we didn’t think sometimes he could even stand up and he always would, we were blown away by their attitudes and their virtuosity.

The Kiss show is just a show that everyone should see at least once in their life. It is like watching a high definition epic movie, quite extreme the level that they go to give people a show. It’s so cool, it’s legendary I think. I can understand what would make a kid look at that and think ‘woah- I want to wear that face paint’. We were watching the show every single night, in awe. We took away a ton from it, and now we have a lot to think about and apply to the next album. We also learned that there’s some magic I think that’s been lost in our generation. You don’t have to sometimes complicate things to show the extent of what people are capable of within the band. That’s why the EP is cool, especially with “Sign of the Gypsy Queen”, we had a lot of fun just singing together. All of the guys in my band can sing, but we don’t really have a lot of chances to do that stuff.

Dead Rhetoric: The Canadian metal scene appears to be bursting with talent, and finally gaining healthy recognition from the label and touring side. Are things on the upswing in your view?

Paige: I do think that things are on the upswing, definitely. I have even seen a shift in our hometown, in the way that people are really open to more genres of metal. It’s becoming bigger and the scene for it is growing. It’s exciting.

Dead Rhetoric: You mention intense cardiovascular exercise as one of your best regiments to keep your voice in shape. How do you maintain any sort of regular schedule in that regard with your long touring escapades?

Paige: Yeah, it isn’t usually consistent because it depends on my energy level. If I’m tired I’ll conserve that for the show. I bring skipping ropes, my running shoes, and sometimes I have resistance bands or light weights if we have a bus. I use my body weight and do a lot of plyometric exercises to raise my heart rate every day and sweat a little bit. It definitely makes a difference, it opens up my lungs and clears any stuff that’s in there. You have to make sure it matters to you, and it really matters to me.

Dead Rhetoric: What are the keys to developing and maintaining successful relationships with your band and management team?

Paige: The keys for me are to show them that I am grateful for what they are doing for me, and how we are working together. Make sure that I am always being very honest and approachable, that we are all communicating well. If you are not communicating, then there can be triangulation or issues that don’t even need to exist. That’s really important and critical. And also nurturing what everyone’s greatest strengths are, you are always better if you are bringing out the best in everyone. I really try to encourage and work with what I think are everyone’s best things, the strengths and best talents. We do some things to raise the morale of the band sometimes, such as the EP. That was something that was important for us to do because we had been off the road for a while and it was important to get the band back together and do something fun with each other.