Kobra and the Lotus – Prevailing Onward 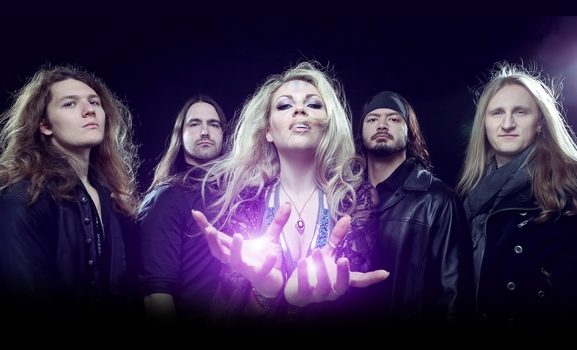 Striving to bring melodic hard rock and heavy metal to the masses in today’s marketplace can be daunting. Competing against limitless options and quicker attention spans, what is here today could easily be gone tomorrow. Canadian band Kobra and the Lotus choose to make up for lost time since their last studio release High Priestess in 2014 by recording a special covers EP dedicated to their home country’s rock legacy the following year, while intensely locking themselves away to write the next record.

Developing a double album’s worth of material, they along with their new label Napalm Records felt it would be best to divide the work into two separate entities. Prevail I hits the streets now, while later in the year the sequel Prevail II will appear. Immediately noticing measurable improvements in terms of songwriting dynamics and melodies/harmonies makes material like “Trigger Pulse”, “You Don’t Know” and “Manifest Destiny” some of the best Kobra and the Lotus songs to date – properly taking the catalog they’ve developed to the current scene with power, strength, and individual character.

Speaking to vocalist Kobra Paige on Skype, her openness regarding the trials and tribulations that have taken place over the past few years is refreshing. Prepare to learn more about the recording of these two records, discussion of her health struggles and recovery, her views on mindfulness, as well as handling the ever evolving music industry model today.

Dead Rhetoric: Last time when we talked regarding the Words of the Prophets covers EP, you mentioned your excitement relating to the next studio album. How did it come about that you wrote and recorded enough material for a double record in Prevail I and Prevail II – as you must have had quite the creative explosion and need of expression all at one time?

Kobra Paige: Yes. There was just so many experiences that we had over the last three years- it was really four years since we wrote the last album. That allows for a lot of time to grow and have new experiences, we had a new stuff that we needed to express. When we came into the studio to record Prevail 1 and 2, we really had so many creative minds working together in the same space. That was the idea, to come together and be in one place where no one could escape and essentially just let it go, and see how many ideas we had. Myself and Jasio (Kulakowski), we have a lot of different musical influences and we appreciate a lot of different kinds of music. There were a lot of elements that we wanted to bring into our music that we hadn’t done yet. It just wasn’t a problem, it was really exciting once it started to unfold.

Dead Rhetoric: You also launched a successful crowdfunding campaign prior to signing with Napalm Records. How much planning and research went into the items and special perks you developed, and what are your views on this platform as it seems to be very polarizing to many in the metal community?

Paige: This was a very interesting experience, because it started as a very good experience and I thought it was a great way to see what kind of support you have out there and see what people have your back when it comes to a project. That was very touching and unbelievable. The only problem was that now in the recent months as we’ve started to fulfill the perks, we are with a European label and we ourselves are Canadian, so our dollar exchange is not equivalent- not even close. It really backfired for us unfortunately in terms of helping us fund the project. It’s actually costs us almost as much as we have raised to fulfill the items that we put out there. So I don’t think I will do crowfunding again because it did not help us in a sustainable way- it actually went backwards which is not what we were expecting. I don’t regret the experience because I loved all the really personal interactions that we could connect to people that support us all around the world. I think that’s an irreplaceable thing.

Dead Rhetoric: You were out of commission on the touring front for eight months due to contracting Lyme’s Disease- do you remember when you started to feel run down, and can you describe the steps you had to take to get healthy again? Was it frustrating to scale back touring in support of your last studio record as a result?

Paige: It was really frustrating, and very scary. I feel like our industry is the kind of industry that moves on very quickly when people are not around and in your face. So, to pull ourselves off the road was terrifying, actually. Especially because we are still a growing band, we are not an established project by any means. I don’t consider ourselves in that place as yet for safety. That’s why we did the Canadian classic rock EP, so we didn’t lose all the momentum that we had worked on for so many years.

The first time I started to be dramatically impacted was when we were on the Kiss and Def Leppard tour a few years ago. I was beginning to fall very ill, I had a lot of issues while we were on the tour. I couldn’t get rid of infections- if I was around anyone that had anything, or got bit by a bug, it would turn into a really big deal. I was having fevers every single night, waking up with the bed soaked, I had a sore throat chronically that I could not get rid of. Just generally also becoming fatigued. When we came off the road, that’s when I went and got myself really thoroughly checked out. My sister had just been diagnosed with Lyme’s Disease, and it was the first time we had really ever heard of it and knew what we could do. That’s why I got tested for it, and I started to treat myself for it. After I did that Metal All-Stars tour, I just knew I was not capable of being on the road anymore until I had a healthier immune system. Because I went over there, I had lost my voice and I didn’t sing for two weeks until I literally walked on stage in Bolivia with those guys, and I didn’t know what was going to come out of my mouth. It ended up being okay, the vocal rest really served me well. I sang but I was very sick the whole time I was in South America.

And now I’m on top of it but it’s taken a lot of aggressive therapy that I really did diligently after we wrote these Prevail albums. Because while we were writing these albums, I was going downhill again. It was challenging, because we needed the energy to write these albums and I was not well- so I was laying down on the floor all the time and had several muscle injuries because my muscles were just tearing. It does really weird stuff to your body. A lot of things came out of it, I also think this helped impact the music. I don’t think that anything happened the way that it wasn’t supposed to.

Dead Rhetoric: What were the sessions like recording with renowned musician/producer Jacob Hansen over at his studio in Denmark? What was he able to bring out of the band that may have been different or special compared to previous work elsewhere?

Paige: This was a really cool experience for us, because Jacob is not exactly the kind of producer – at least for our project- that got involved in the songwriting. He was more looking at the general, bigger vision of the project. He made suggestions like drop tuning the songs so that it gave us a fresh sound and opened up more room for the band to play more notes. And for my vocals- to have more room to have dynamics and different tones, and use more of my range. This was stuff I was too scared to try in the past- but Jacob really pulled that out of us. He introduced us to a really brilliant songwriter in Denmark- that guy came in and he was from the same town Ribe, and together with Jacob really showed us all the patterns that were inside our music that sound very specific, and I guess predictable. That was a huge thing, because it was a new way to look at the chords, giving ourselves more options, going new places and opening up a new vein of more exploration. Even on the drums- they would say ‘ok, you did this again – this is the same thing that Iron Maiden does’. It would be a very traditional metal sounding thing that is repeated over and over again, do we want to make it different or keep it the same? And we were like ‘oh my god, we didn’t even notice we were doing this all the time!’. It was very brilliant. It encouraged us immensely to explore more of what we were capable of. I would have never (sung) it in this way if someone didn’t tell me, ‘no- you can do this. Your range can handle this.’

Dead Rhetoric: How much of a challenge is it to decide what songs would go on each record, given the release gap between both? Has song order/flow always been important to the band?

Paige: Song order and flow is very important. I think that an album needs to retain its energy throughout, but also have some moments where you can breathe when you listen to the music- and also have some palate cleansers, almost like espresso beans or when you are smelling perfume. If you have too much of one thing, you start to think the songs are blending together and (it becomes) too much for the ears. That’s how the albums have been planned out, I guess like how a live set would be. It was quite difficult to decide which material would appear on each album- it started with us deciding that “Trigger Pulse” was going to be the first song that we would release to the people, and that set the premise for what would be on this album and what’s going to be on the next. And also, making sure that each album had an equal amount of hard rock, heavy metal, and new evolution integrated with the old Kobra and the Lotus. That is something that became very easy once we picked the first couple of songs for each album. Songs like “Hell on Earth”, that is on Prevail I, so another song that is very straight up heavy metal is going to be on Prevail II.

Dead Rhetoric: It seems like there was even more of an emphasis on developing stronger hooks and vocal harmonies through songs such as “Manifest Destiny” and “You Don’t Know” – do you feel like you are constantly growing and evolving due to the capabilities within the band and natural life seasoning/experience?

Paige: Absolutely. I don’t think that any of this could have been created without all the experiences we’ve had. If you think about what happens in one year’s time, so much happens. When you bring it to the table, it really can make for some big steps forward in how you create your (material). I really believe that. This wouldn’t have been what this is without all the tours we’ve done, all the people we’ve toured with, and all the experiences that we’ve had and the things that we’ve learned. I really think that it has seasoned us, for the songwriters in the band- it’s made us lock into stronger songwriting as well.