Keep of Kalessin – The Infinite Orchestra 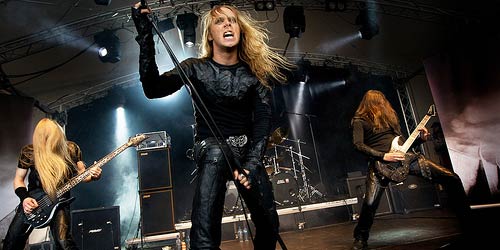 It’s funny to hear a musician knock their previous work. Hindsight is always, always 20/20 (and it’s still a bit fuzzy, right Mustaine?), so to hear Keep of Kalessin guitarist Obsidian C. rag on the lack of production for their 2008 Kolussus effort is interesting, ’cause when this scribe spoke to Mr. C., the lively production job was one of his primary selling points. Sure, it doesn’t have the sonic girth of a Dimmu Borgir recording, but it was a snappy, raw (not too raw, mind you) mix that brought to life C’s thrash-laden riffs and drummer Vyl’s magnificent drumming. Then it was unique; now it’s seen as a hindrance for the long-running Norwegian BM troupe. Speaking to C. now, the man is clearly dissatisfied with it, prompting the services of famed producer Daniel Bergstrand [In Flames, Meshuggah] to aid with the recording of the drums for their newest effort, Reptilian.

From purely a sonic standpoint, Reptilian is a stark improvement. From the onset, as opening number “Dragon Iconography” kicks in, the album brims with a degree of heaviness previously not heard on a KoK album. Stylistically,Reptilian builds upon what the band started with Kolussus, this time, going for the gusto on several tracks, namely “The Divine Land” and “Reptilian Majesty.” Where it stacks up in comparison to the rest of the band’s discography may hinge on how well (or how poorly) received “The Dragontower” is, which is a blatant attempt at pop black metal if there ever was one. Considering its entry in the Eurovision song contest, you could see where Keep is headed with this one, and it might not be a good place.

At the present time, Obsidian C. is supremely confident that this is the album to push Keep of Kalessin through and on a rainy Sunday in May, we were all ears…

Blistering.com: I remember talking to you around the time Kolussuscame out two years ago and you seemed pretty confident as to how it would do. Did it meet your expectations?

Obsidian C.: [pauses] I think that Kolussus didn’t do that well, but when you stack up against sales from [2005’s] Armada, it did do well. There’s lot of potential in this band and there’s lot of people out there haven’t lent their ears to hearing Keep of Kalessin. When I look back at Kolussus, I don’t feel we nailed that potential on the album. I mean, the songs are good, but the production is lacking a lot. I think that the new album has to powerful and heavy. I think Kolussus suffered from lack of production.

Blistering.com: Do you think it was because Kolussus sounds different than a lot of black albums is why people had some difficulty with it?

Obsidian C.: Yeah, some metalheads…they don’t want that much to change. They want their metal albums to be the same, all the time. Especially in Europe. If a band comes along and does something different, they’re not ready for it. I think that for a band like us, it takes a lot more time than the normal, sounding, heavy and powerful production. A lot of bands that don’t spend that much time on songwriting, did a lot better than us. People look at it and expect something from a metal album and if someone does something different…it takes a little more time. I’m hoping people will be open to this album because it has more power and it’s a lot more direct. And it’s still typical Keep of Kalessin. I think it keeps the essence of Keep of Kalessin with more power and better production.

Blistering.com: You had Daniel Bergstrand help out this time and I know you oversee a lot of what goes on in terms of the band. What did he add to the process?

Obsidian C.: It was really nice, actually. This album was the first album that I totally produced. I recorded all the guitars, the vocals, keyboards, everything, by myself. On Kolussus I had help, so it was necessary to have someone else to do the drums. Everyone knows that recording metal that the drums are always the hardest thing. Instead of recording drums and being totally set on how they sound, I think it was totally necessary to have the drum production be handled by someone else so I could start with a fresh mind. It was a big relief for me to not record the drums.

Blistering.com: Well, you definitely got the big sound on this one.

Obsidian C.: Oh yeah. It’s a little more direct sounding, more “metal.” Kolussus was more epic, but this one is more epic and bigger than anything we’ve done. We wanted to think that less is not better than more. We wanted to go totally overboard, at least on a couple of the songs. I wanted to just…forget about feeling, and throw everything into the songs. At times we have 72 tracks of vocals, different choirs…it was probably, I think, at the same time about 114 tracks total. Even Daniel was totally blown away by this big production. He admitted to me that this was second hardest production he’s done. It was packed with detail. My point for doing this was that you shouldn’t hear every single track; it was so you have an infinite orchestra. It’s the bigness of it; the presence. We really catch that on a couple of songs like “Divine Land” and “Reptilian Majesty.” Those were the songs I wanted to go over the top.

Blistering.com: There are tons of cool riffs going on – like the beginning of “Judgment” or most of “The Awakening.” For someone as riff-based as you, where do some of these stand?

Obsidian C.: To me, the metal riffs are the easy part [laughs]. The riffs that are more thrash metal, is a lot easier than writing the melodic stuff and getting this unique atmosphere on the album. And actually, I’m one of the people that think that song is more important than the riff. I always feel that I leave out the best riffs on every album. I always wish that I could bring my best riffs to an album, but the problem, the riff needs to be a part of the song. I have a lot better riffs than the ones that actually make it to the album. They’re also harder to match to a song, so I have to weed out 90% of my riffs. I’m starting to get the combination that I’m after in bringing those metal riffs to the epic riffs.