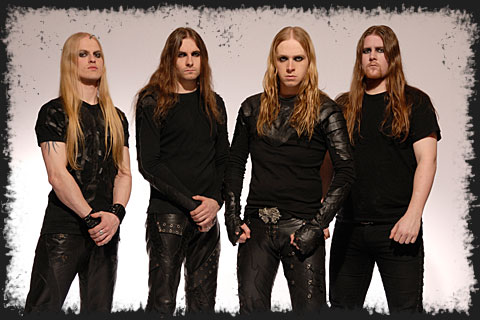 The black metal scene is in a perpetual state of flux. The old guard of Mayhem, Emperor, and Satyricon are either defunct or painstakingly slow in their studio creations, while the two bands that often brand BM on a commercial level – Dimmu Borgir and Cradle of Filth garner such a split reaction that it’s no longer worth arguing about. Somewhere along the way, Keep of Kalessin has crept up on us all with Kolossus, by far the most definitive, fuck-all BM statement of the year.

Led by riff lord in-waiting Obsidian C. (of Satyricon touring fame), Keep of Kalessin has been peddling their black metal wares since the mid-90’s, never making nary a whimper until 2003’s Reclaim, which featured the considerable talents of Frost (drums, Satyricon) and Attila Cishar (vocals, Mayhem). 2006’sArmada was the first real salvo from KoK – its nihilistic/militaristic feel became the perfect vehicle for Obsidian C.’s potent riffage.

By now, Kolossus should be firmly embedded in the collective psyche of the underground. A sure-fire candidate for Top 10 lists of 2008, Kolossus is the raw and primal BM offering many have craved and I’ll be damned if this isn’t one of the most “real” and “human” BM album’s heard in a while – you can literally feel Keep of Kalessin raking away at their instruments on the recording.

Fresh off a very successful North American run with Dimmu and Behemoth, Obsidian C. was kind enough to phone Blistering to discuss the aforementioned tour, the risks of “all-natural” studio recordings, and the secret behind his unique riffing style…

Blistering.com: You’ve been off the Dimmu tour for a few weeks. What were your overall feelings/impressions?

Obsidian C.: I think this was the best tour we have ever done. The guys in both Dimmu and Behemoth treated us very well and we had a great time on the tour. Everyone had a great personal time and we are good friends with both bands. For the most part it went really well, even though there were a few shows that didn’t go as they should with regards to technical problems, and a lot of stress when we didn’t have enough time to prepare, but overall, I think this tour was really good.

Blistering.com: Do think there is a market for Keep of Kalessin’s type of black metal in North America?

Obsidian: Yes, definitely. I think we have something unique to offer to the metal scene, not just in black metal, but we are a metal band that doesn’t sound like any other metal band. I think that’s something all the bands have that sorta unique thing to their style of playing metal should be out there. I see a lot of Scandinavian bands staying busy in the US and I don’t see why we can’t do the same.

Blistering.com: Prior to this tour, the band had a solid reputation in Europe as a strong live band. Do you think this tour solidified that?

Obsidian: We are definitely one of the better live bands if you consider the black metal bands, but I also know we just started doing this much touring [recently] and it takes a lot of time and money to get the point we want to be. I’m thinking about the proper crew, proper sound guy. We haven’t had our own sound guy – we’ve been using other band’s sound guy and with the festivals, they use local techs as well. It’s a matter of economics and having the correct equipment.

The band’s performance on stage is really good now, but I also know that we need to get everything else after regarding the sound and we’ve been working a lot with that lately and we’re getting closer and closer, so I think in time we’ll be one of the best live bands within the black metal genre.

Blistering.com: Is being the only guitarist a pressurized situation when it comes to playing live?

Obsidian: I think the reason there is one guitarist is that I write all the music. We’ve talked about bringing in another guitarist, but my style is so unique… it’s not that it’s that difficult, but it’s unique and when you’re playing as fast as we are with so many elements in the individual riffs, I think it’s really hard to bring in a second guitarist because it might make more of a mess than adding something. It’s impossible to find someone who can play really well, has long hair and can do all of this for free because we can’t afford paying a session guitarist [laughs].

Blistering.com: What prompted the move to record Kolossus without a click and totally live?

Obsidian: I always say this: the press release in the US went out without me seeing it. We didn’t record the album live in one take. That sounds wrong to me. We avoided using the ordinary cut-and-paste takes. Every instrument is played like it is. We used a click track, but me and the producer were talking about how Vyl (drums) was playing on the “Kolossus” track and he kept falling behind the click and getting back in, we decided against changing it to make it perfect and left everything as is.

We thought, “Why, why all the sudden is it wrong that you can hear a human playing on an album?” Today, what separates the drummers of today is not how they are playing, but who the producer is. I think that is something to be aware of and we wanted to keep each individual marking of each instrument. We wanted to make it sound like a band was playing. We didn’t copy and paste and edit stuff. There are so many details in our production and adds more atmosphere. It has this organic feeling – humanity – this living, breathing album and each individual adds his characteristic to the instruments. I think it’s a very bold thing to do today.

All the kids growing up think drums should sound like they are programmed and are edited perfectly. I grew up with thrash metal, black metal in an age where this was not done that often. There’s definitely too much editing going on in this day and age.