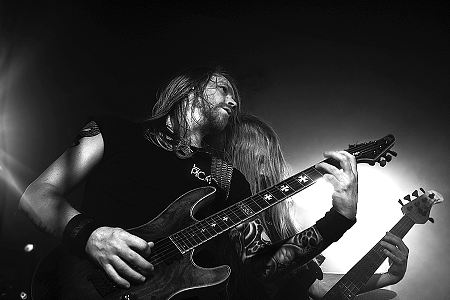 Dead Rhetoric: It might be your least metal-sounding album, actually.

Nyström: Yes, and there were some poppy influences on there as well. But with Viva, we wanted to have a really good guitar songs where I can do some intricate, cool riffs on one string again. We wanted the riffs; we wanted to go more riff-based on that album. For me, the way I see it, the Viva Emptiness is the first album in the latest phase of Katatonia. For Viva, I’m still doing things off that platform, we just took it way further.

Dead Rhetoric: Has your opinion on any of those songs changed, like “Will I Arrive?” Or maybe “One Year From Now,” which is definitely a singer/songwriter type of song.

Nyström: I think the remix of the album, “One Year From Now” became me and Jonas’s favorite song because so much was done to it. That was a forgotten song on the album, now it’s so vibrant, it’s exciting. It makes sense now. It was an attempt to do singer/songwriter oriented songs, but maybe we weren’t ready to do it back then. Now we have more tools to do it. But, revisiting this album has made me realize how many great songs are on there and how exciting it will be to play this live.

Dead Rhetoric: You haven’t done this one in full, right? Which songs haven’t you played?

Nyström: There’s three or four songs we haven’t touched. “One Year From Now,” “A Premonition,” the outro…I think we touched all of them. [laughs]

Nyström: I don’t mind playing that song, but if you don’t play it, people see it as blasphemy [laughs] if we leave it off the setlist.

Dead Rhetoric: In terms of where the band was around the time of recording, do you consider that a big turning point? Were you able to turn the band into a full-time thing by then, or was it for The Great Cold Distance?

Nyström: It was more The Great Cold Distance. We made the decision to do it then, and I think we were in some twilight zone with the Viva Emptiness. I think that was a very struggling period for us. There was no steady income, we didn’t tour much, but we were just as enthusiastic and passionate about everything. It was hard to make a living and get on by. Things really took off and clicked with the label and the management. Well, we didn’t have management at that time.

Dead Rhetoric: Because you were the band’s manager.

Nyström: [laughs] I was, but we got an agent, at least for The Great Cold Distance. With Viva Emptiness, I was doing everything. Everything, except for our artwork, which was Travis Smith.

Dead Rhetoric: The first time you were here in the States, that was 1999 or 2000 for the Milwaukee Metalfest. What do you remember most about that show?

Nyström: [shakes head] We were so much looking forward to the gig; it was a big deal for us. We were hearing that so many people were going to show up that had waited forever, we had waited forever. The festival itself was killer to be at, but it was so disorganized. It was a big rip-off going on; there were so many bands being ripped off. We were very dependent on our gear and the instruments to make ourselves worthy of a live show and we weren’t given any effects or floor pedals. Our sound is in this stuff! We aren’t Motorhead! [laughs] We’re not a punk band, so we had to struggle just to get our sound going. We had trouble with our monitors, so nobody heard each other, Jonas sang out of key the whole gig. What can you do? It was just one of those gigs. It was a great time being over here, but show-wise, it was disastrous.

Dead Rhetoric: I believe we talked about this last time, but you are working on a career-spanning documentary for the band. What’s the progress?

Dead Rhetoric: I’m sure you have a lot of old VHS footage you have to convert.

Nyström:I have converted all of it. [laughs] Some of questionable quality, but it is what it is. I have rehearsal footage from the demo times…like we’re out in Jonas’s barn. That’s still the time when we had a few fast beats. I had a great time watching them through because I had to label them going into different folders and there was stuff I never thought we had, from like more recent years such as 2003 to 2007. A lot of backstage footage people will be interested to see.

Dead Rhetoric: You have such a unique story to tell, so I can only imagine the work that goes into it.

Nyström: I want it to be told from the start. It doesn’t make sense to just dive into something…I don’t want things to be half-assed.

Dead Rhetoric: Are you going to talk about the period in which you were split up and you went off to do Diabolical Masquerade?

Nyström: Of course. That’s all in the manuscript. It has to have all the events, then I want people talk around it.

Nyström: The urge is there. The time ain’t there, but the urge is there, so it’s a catch-22. We still have Bloodbath. We will finish up one more album. Then after that, I don’t know what we’re going to do, but if Bloodbath isn’t around, that would be the time when I can look over the old corpse.

Dead Rhetoric: What can you do after something like Death’s Design?

Nyström: The direction I was going for before I decided to split up was Nightwork. I wanted to do real songs again. But the music was a mixture of Nightwork and Death’s Design; it wasn’t 42 segments [laughs]. It was real songs.

Dead Rhetoric: Any thoughts on new Katatonia material? Or are you still in reissue and Dead End Kings mode?

Nyström: There’s too many releases right now. Dethroned and Uncrowned just came out. Obviously, the reissue of Viva Emptiness, and we’re going to tour for Dethroned and Uncrowned as well. That’s going to be very interesting and very different. As different as possible. Seated people. Seated band. It’s going to be the hardest thing we’ve ever done. People will be like, “Oh it’s just you and acoustic guitars.” It’s more than you ever could imagine. Going up there and the heavy set, it can’t be compared to that. Once we’re done with that, then we’ll start looking at a new album.