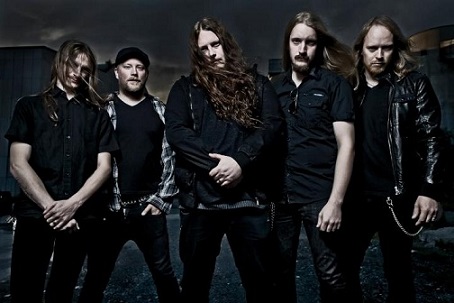 Quite dedicated to North America Katatonia has become, which is music to the ears of their fanbase, of which yours truly is not afraid to rank himself at “fanboy” level. The band is a sure-fire winner in this market, given their broad commercial appeal and constant volleying between metal, alternative, Goth, and everything else in between. In the end, it’s simply Katatonia, and they’re currently experiencing their largest crowds on these shores to date in support of longtime pals Opeth. Talk about a dream tour.

The year has been a busy one for the Swedes, being that it’s their 20th anniversary. In celebration, the band has squeezed in headlining shows which features the airing of the entire Last Fair Deal Gone Down album, as well as select cuts from the band’s back catalog. It’s a momentous feat for the band in light of their once-regular lineup turnover in the 90’s, which was recently augmented thanks to the late 2009 departure of the Normann brothers (Fred, guitars; Matthias, bass). However, the dual acquisition of “live” members Per “Sodomizer” Eriksson (guitars) and Niklas “Nille” Sandin (bass) has invigorated the band’s lineup, and now Katatonia is full-steam ahead through the Opeth tour and into the studio for their ninth album, due for release in late 2012.

Guitarist and founding member Anders Nyström was all-too-kind to phone Blistering while on a stop in Austin, Texas to discuss all of the above and what lies ahead. Take it away, Blakkheim…

Blistering.com: No days off on this tour. How is that working out for you?

Anders Nyström: [laughs] It’s kind of rough. We’re not even four weeks into the tour yet, but so far so good. We’ll see at the end of the tour how much we have aged [laughs]. Still, it has been good and we enjoy it. As long as you enjoy it, you’re doing the right thing.

Blistering.com: This is your first North American tour with Opeth, which has to be cool. I know you and Jonas [Renkse, vocals] are best friends with some the of guys, so it has to be an added bonus.

Nyström: It’s a perfect scenario. We’re good friends and we did this once before in Europe and we have many great memories from that run. It’s a perfect bill; like a dream bill for some of our fans.

Blistering.com: Doing the headlining shows with the Last Fair Deal album, are you surprised as to how well some of those songs translate live?

Nyström: I am! When we decided what album to do back-to-end, we were talking about doing a lot of the albums, but we choose this album because it’s the 10-year anniversary. The other reason was that’s the only album where we have played almost every song live. We knew it was going to work out. I agree with you, some of those songs come across way better than we thought live. It’s a thrill to be able to play all of those in front of an audience. It’s not something we’ll do often – we won’t play every album back-to-front for every album’s anniversary, but it’s a pleasurable kick to do something like this.

Blistering.com: Some of the songs on the album like “We Must Bury You” doesn’t appear like it would work live, but when I saw you in Cleveland a few weeks ago, it was one of the best.

Nyström: That song has a lot of controversy to it. You either love it or hate it. We didn’t know how that one would turn out, but once we started to rehearse it, it was a slammer of a song. It has an aggressive edge to it and it sounds marvelous. It’s one of my favorites to play live.

Blistering.com: You picked up the mic and did the vocals for “Without God” and “Murder.” Was that the first time since your Diabolical Masquerade days that you have done some serious growling?

Nyström: [laughs] Yeah! I’m fine doing it because we’d rather have Jonas save on his vocals because we have so many shows to do. If he loses his vocals from growling, we have to cancel a gig and that’s a no-no. We just felt like we could keep it in the spirit and let me growl.

Blistering.com: It must be fun to play frontman for once.

Nyström: Yeah, it’s very different. It’s become…icing on the cake for me and something I really enjoy doing. It’s like, “No problem!” [laughs]

Blistering.com: When was the last time before these tours you played “Without God?” That’s really going back into the vaults.

Nyström: [pauses] Many, many years. That old material, it’s something that takes longer for us to pick up on, but since this is our 20th anniversary, it felt right to play them. So “Without God” and “Murder,” we have every album included.

Blistering.com: Talk to me about the progress you’ve made in North America. This is the fourth time you’ve been over on a full tour, so are you starting to see some real results?

Nyström: This is what our mission is about these days. In North America, we’ve basically had to start over. We have to go here way more than we did in the past to make up for lost time. We’ve done and conquered Europe, but we need to change that for North America. We need to come back over as much as possible. We’ll grab every opportunity we have for it. North America will definitely be seeing a lot more of Katatonia in the coming years.

Blistering.com: Per and Niklas, the two “live” members. Any consideration to them becoming full-time at this point?

Nyström: Yeah, we take things step-by-step and let things grow naturally, but I think the way things are working out, it’s going better than we expected. We didn’t know what to expect – it was something that was quickly finalized as a solution for them to join us on tour. The timing when the old members [the Normann brothers] left and those two joined was less than a month. And we had to go on tour for three months, so it has worked out much better than we expected. They’re really into the whole thing. They have a lot of energy, they love touring, they love playing. They’re not tired of it or anything, and they’ve injected a lot of energy for me, Jonas, and Daniel [Liljekvist, drums] to get going [laughs].