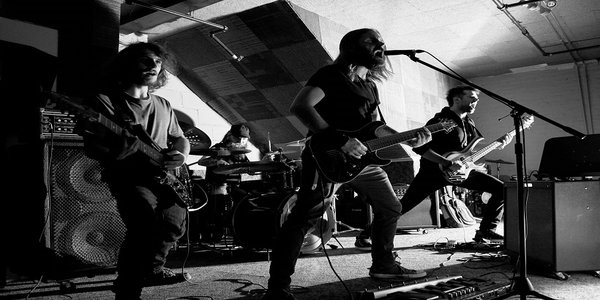 In writing these short reviews, it dawned on DR that print as a medium, whether digital or physical, is having a tough time of late. With video content gaining steam and large media corporations (see Fox Sports, MTV) no longer having actual text in their news, the written word is facing another challenge. But as, we won’t be going that route in DR. We enjoy reading as much as the next guy. Anyway, up for debate in this month’s installment of Rapid Fires is Anticlockwise, Bloodlust, Centuries of Decay, Chemicide, Eaten, Faceless Night, Inferum, Kissin’ Dynamite, Kval, Lör, Mental Slavery, The Shape, Solitude Within, Tigersclaw, and Unseen Faith 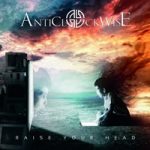 Anticlockwise – Raise Your Head (Revalve Records)
Filling a void left when Nevermore imploded in 2011, Italian group Anticlockwise with this third album Raise Your Head attain similar dark progressive metal pastures as Warrel and the boys. So much so, many guitar sweeps and ungodly low to high vocals from Claudio Brembati will harken back to Dreaming Neon Black or Dead Heart peaks. Plus, song titles like “The Gutenberg Plague” and “The Blue Screen of Death” further the similarities. Whether or not this appeases or appalls your metal sensibilities, there are some killer, low-tuned hooks to scramble around for “Mothertongue” – and the seven-minute epic “Into the R.A.M.” features a tasteful, clean opening and logical heavy transitions with fierce vocal parts to make this the highlight. While awaiting a reunion, Anticlockwise slot in adequately for Nevermore fanatics. – Matt Coe (Anticlockwise on Facebook) 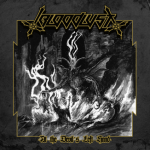 Bloodlust (Australia) – At the Devil’s Left Hand (Caverna Abismal)
Destroyer 666 currently sits atop the Australian extreme metal scene and for good reason: few bands can blend death and black metal while making it sound like a bunch of bikers raised on NWOBHM created it. In the case of their countrymen in Bloodlust, it’s somewhat of a similar approach. On their appropriately-titled At the Devil’s Left Hand, Bloodlust properly whip a gnashing, feverish black-on-death blend, with, in particular, the frothing “Death the Conqueror” bearing its teeth. – David E. Gehlke (Bloodlust Facebook)

Centuries of Decay – Centuries of Decay (Self-Released)
Described as a concept record regarding the changing times and how life depends on centuries of decay, the debut foray from Toronto’s Centuries of Decay certainly does not lack in ambition. These cuts are mostly a long hill to climb, with progged-up Opeth riffs carrying most of the load while regular clean and grunt volleys keep matters flowing evenly. Get down with the neck-snapping “Wings of Death.” It’s a Canuck groove-metal gem. – David E. Gehlke (Centuries of Decay Facebook) 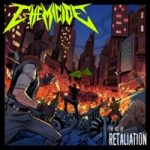 Chemicide – The Act of Retaliation (PRC Music)
Remember when high top sneakers, denim jackets, and bullet belts were all the rage for 80’s thrash? Costa Rica’s Chemicide certainly do – as their second album The Act of Retaliation lives for a speedy, crossover style that put Kreator, D.R.I., and Vio-lence on the map. Between the savage pummeling Jairo unleashes on his drums and equally raspy roaring from guitarist Frankie vocally, most will suffer whiplash and neck strain once airing “Democide” and “Retaliation” a few times. Wisely varying the course through the occasional melodic instrumental such as “Episodes of Insanity” or certain softer, Maiden-esque sections for “Codified to Kill”, Chemicide feel comfortable staying in their lane – not rocking the thrash boat so to speak. It’s like 1987-1989 all over again. – Matt Coe (Chemicide on Facebook) 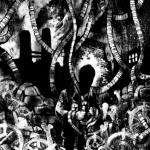 Eaten – S/T (Give Praise)
Mostly self-explanatory, although Eaten happens to be a grindcore, not death metal band. The drill is obvious and effective: nineteen quick, unrelenting slabs of grind, grimed up by blasts and the appropriate range of gurgles and grunts. Of particular should be the bass tone here, which manages to poke its way through all of the noise and slamming. It doesn’t take much to perfect grindcore, but Eaten appear to have their (torn-apart, ripped to shreds) house in order here. – David E. Gehlke (Eaten Facebook) 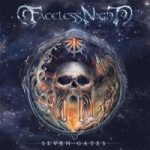 Faceless Night – Seven Gates (Anger Music)
Although together since 2008, lineup changes and the fun to serious aspect of the group caused time to elapse for years – as Seven Gates is the first EP for Italian sextet Faceless Night. Containing male and female vocals, the seven songs sit in comforting Euro power metal lines – preferring a mix of mid-tempo Stratovarius and older Elvenking as obvious templates when it comes to riffing, hooks, and melodies. Stage names like Dr. Slaves, Metal Snake, and Hard Dragon plus distant production values aside (the guitars and bass seem distant compared to the drums and vocals), the charging guitar/keyboard salvos on “Eastern Assault” keep the blood flow going, while “Flash of Light” features some folk passages to expand their style. Growing pains appear obvious, where vocals occasionally reach beyond comfort zones – as a result leaving Seven Gates in hopeful, but not quite ready for the big time ranks. – Matt Coe (Faceless Night on Facebook) 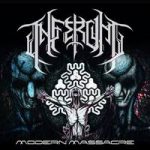 Inferum – Modern Massacre (Reject Entertainment)
Self-described “mechanical death metal” act Inferum introduce themselves to the world with Modern Massacre. Sometimes sounding akin to Fear Factory if they had decided to venture down the deathcore rabbit hole. Some other influences can be found along the way, such as the groovier end of deathly bands like Decapitated, and the breakdowns of say, Thy Art is Murder. It’s unmistakably heavy as you move through it – with the Fear Factory-styled chugs giving the band a rightly mechanical tone. The one problem of course, is that of the more generic deathcore vibes. While the blend of more cyber and modern metal is nice, sometimes the deathcore influences feel stale in comparison. Considering the average age of the members is 19, there’s some good potential for the future though. – Kyle McGinn (Inferum on Facebook) 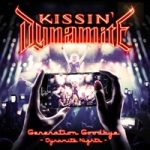 Kissin’ Dynamite – Generation Goodbye – Dynamite Nights (AFM Records)
Celebrating their 10th anniversary as a group, these Germans still reside on the youthful side in their mid-twenties. Kissin’ Dynamite have steadily released a stockpile of great records, straddling the melodic metal and hard rock platforms. Generation Goodbye – Dynamite Nights captures the group live, 25 songs in a sold-out hometown performance for December 2016 in Stuttgart. Available in DVD/CD or Blu-Ray/CD combo packs, the audio portion features all five studio albums – including the duet “Masterpiece” with Beyond the Black’s Jennifer Haben. Easy hooks and crowd-oriented choruses aplenty, highlights include the up-tempo “Highlight Zone”, early favorite “Steel of Swabia”, and the dramatic ballad “If Clocks Were Running Backwards”. Pretty Maids fans and those who lament the loss of arena shows from the 80’s and early 90’s, if you’ve missed out on Kissin’ Dynamite- this will bring you up to speed. – Matt Coe (Kissin’ Dynamite official website) 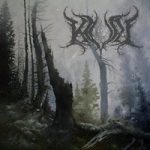 Kval – Kval (Hypnotic Dirge Records)
One man gloomy black metal act Kval (previously known as Khaossos) brings the sullen darkness on their self-titled debut. It’s atmospheric, but not moving into the whole Cascadian territory. Instead it calls to mind bands like Burzum or Forgotten Woods. It’s glum, it’s fuzzy, it’s cold, and the atmosphere feels more hypnotic than abrasive. The type of thing you are going to really get only by taking it in it’s totality – get lost in the moment and absorb it in. Otherwise the lengthier tracks will definitely drag. For what it is, Kval is solid, but it never really reaches outside the atmospheric black metal boundaries – making it oddly straight-forward for a label that usually presents some really “out there” stuff. – Kyle McGinn (Kval on Bandcamp) 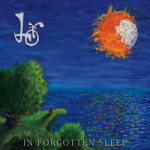 Lör – In Forgotten Sleep (Self-Released)
Never thought a well-versed, thoroughly promising progressive folk metal band would emerge from Philadelphia, but here we go with Lör. Perhaps more on the epic power metal side then they initially lead on (Blind Guardian is listed as an influence), the band’s deft blend of folk, crafty musicianship and the impassioned lead vocals of Tyler Fedeli are certainly of impact on “Requiem,” the album’s obvious highlight. The band has been kicking around since 2009, so it looks like they’ve spent some quality time honing their craft in their rehearsal room. It shows on In Forgotten Sleep. – David E. Gehlke (Lor Facebook) 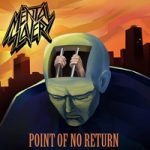 Mental Slavery – Point of No Return (Self-Released)
Thirsting for crunchy, up-tempo thrash and hypnotic transitions? Russian quartet Mental Slavery serve them up in quick hitting fashion for this Point of No Return EP. Stunted vocals a la Coroner, the heads down riffing and steamroll rhythm section makes me think of Evile and the Texas band Devastation against some later 80’s Bay Area work from Heathen. Hard to not maintain composure when taking in the fleet lead play for “Answers”, or the stop/start razor sharp guitar action on the follow up title cut. Rare as well to not have a song in this style of thrash so focused on that three-minute and change, get in and get out execution. 13 minutes of pure, aggressive and musically savvy thrash that should put them on the map. – Matt Coe (Mental Slavery on Bandcamp) 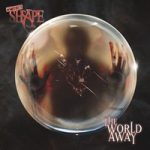 The Shape – The World Away (DME Management)
Modern metal act The Shape seem to fit their name better than one might think. Over the course of The World Away, the band contorts themselves through metalcore, sludge, alternative metal, thrash, and more – shape-shifting is an understatement. Some of it works, particularly at the heavier end of the spectrum (“Decimation” or “The Bargain”). But the whole thing feels like a hodge-podge of various influences and doesn’t feel particularly cohesive as the album moves on, particularly when head-scratching, ballad-y alt rock territory is reached with “Anathema” and “In the Valley of Lies.” Solid songwriting, but The Shape would do well to lock in what really calls to them instead of spreading themselves thinly across the board. – Kyle McGinn (The Shape on Facebook) 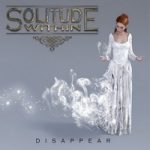 Solitude Within – Disappear (Self-Released)
Symphonic metal acts with female singers are a dime-a-dozen at this stage of the game, so a fresh act really has to standout to not be simply retreading familiar territory. Solitude Within prove spry in this area, even if things still retain a certain familiarity and comfort to them. There’s a rock-ish base to Disappear, with makes it feel more direct and approachable than overtly bombastic and it fits well with Emmelie Arents’ vocals. Also helping the band is a healthy level of grit that appears throughout. The guitars have some power behind them, as tracks like “Eternal Flame” and “Burn” (love that heavy, doomy riffing) show, and gives them some breathing room from the Nighwish and Within Temptation wannabes. Some real promise here. – Kyle McGinn (Solitude Within official website) 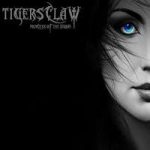 Tigersclaw – Princess of the Night (7hard Records)
As already discussed with the afore-mentioned Solitude Within, the effort to go a bit outside the box is everything when it comes to standing out in a crowded genre. Tigersclaw occupies much of the same territory as bands like Nightwish and Xandria, but their particular brand of symphonic power metal does help to separate a bit due to the punchiness of it all. At it’s best, when the band gets going, they soar with a combination of riff-forward symphonies with Elena’s soprano vocals (even with a touch of electronics a la “Revelation”). Somewhat familiar, but righteously executed. Unfortunately, for every cruncher like “World of the Dead,” there is an “Eternal Flame,” where the genre tropes overwhelm an otherwise solid track. In the end, there’s more to like than dislike, but one can’t help but think this would be a stronger release with a few less tracks. One of those “excellent EP trapped in a full-length” type releases. – Kyle McGinn (Tigersclaw on Facebook) 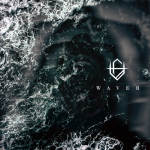 Unseen Faith – Waver (Prime Collective)
You’d think the venerable Danish metal scene would be immune to the sonic plague that is modern deathcore, but alas, here comes Unseen Faith. Really, just a composite band of several other composite bands, Unseen Faith plays the predictable brand of d-core that emphasizes bouncy, simple chug riffs (here’s a hint: they would be nu metal riffs if this was 2001), all the while annoying tough-dude vocals and the sparse pop-melody join the not-so-fun party. Yargh. – David E. Gehlke (Unseen Faith Facebook)