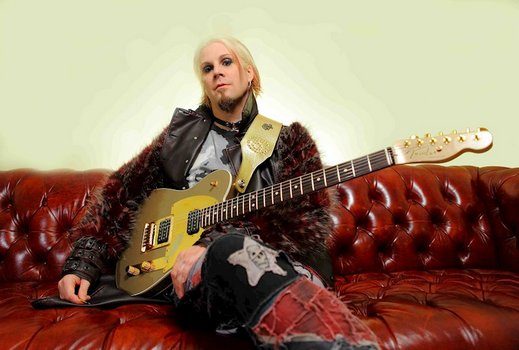 Notable for his involvement with a slew of bands over the years, including everyone from K.D. Lang and David Lee Roth to Marilyn Manson and Rob Zombie, John 5 has also spent plenty of time building up a name for himself on the solo circuit. His latest release with The Creatures, Invasion, has just been released and features a massive variety of different musical sounds and influences. But it all gels into something cohesive, and most importantly, fun to listen to. We got the opportunity to catch up with John 5 prior to the release of Invasion to discuss everything from instrumental music and the new album to his thoughts on the future of guitar and some of his favorite experiences.

Dead Rhetoric: At this point, do you feel that releasing a video/song each month leading up to an album’s release was beneficial to you? Does it get the word out about the album?

John 5: I think, not just for me, but for artists in general. It’s a great way to keep your record alive. It keeps you in the news. I always view things like what I would have liked as a kid: could you imagine if your favorite band back in the day released a new video every month? I would have lost my mind! I wouldn’t even know how to comprehend that. So I think it’s a really good tool when you use it that way.

Dead Rhetoric: With the focus on video, did you feel it was important to provide a lot of different types (cartoon, live, and more) to grab people’s attention?

John 5: I think it’s all entertainment. It keeps it fresh and keeps it entertaining for both myself and the audience. It’s a lot of fun. Videos are what you want to express that goes along with the song. I really enjoy doing videos. We have a new one coming out when the record comes out called “I Want it All” and it’s completely different from all of the other videos. It’s going to be a lot of fun.

Dead Rhetoric: How important is the element of entertainment when you are presenting your material live?

John 5: It’s the same thing. I could just go up and play guitar and play my songs, which works for a lot of artists, and it’s great. But for me, I’m thinking that I want to give a little bit more, and that’s what I do. I try to create a cool stage show related to everything that’s going on and it seems to really work. People tend to really enjoy it.

Dead Rhetoric: What do you feel are the most important aspects of writing when you create instrumental music?

John 5: I love a good song, just like anyone else. But it is difficult to write an instrumental song. You have to have a good hook, cool guitarwork and musicianship, but you also have to make it hooky: a good riff, a good chorus, and a good melody, and a lot of flash. It’s kind of like a completely different way of looking at songs. When you write a song with a band/singer, you have to stay out of the singer’s way so that it doesn’t get in the way of the singer and the lyrics, but with this, it’s an open palette. You can go crazy, but you have to remember to keep it hook-y for people to just enjoy in the car.

Back in the day, there were a lot of instrumental tracks that were radio singles. “Frankenstein,” a few Led Zeppelin songs, even “Eruption.” That was just a brilliant guitar solo. So it’s about keeping that alive by writing good songs so that people enjoy it.

Dead Rhetoric: So what tends to be overlooked by someone who is just getting into writing instrumental music?

John 5: I think what gets overlooked is a good riff. A good melody. Something you can hook onto in the chorus. I always say to have a good, hook-y type chorus. Not everyone plays guitar; not everyone plays drums or bass. You want to have that listener go, “Oh, I really like that song.” It could just be a little hook that reels them in like that. I think that’s important to have, and that’s what I try to tell people that are starting to write music like that.

Dead Rhetoric: Given the amount of variety that is put into an album, how important is the overall flow?

John 5: I think there is a really nice flow to the record, because there are so many roads and avenues that are taken and approached. You don’t really get sick of it. If it was the same thing over and over, you might get sick of it. But doing it like this, there’s so many avenues and styles. I think that is what keeps it entertaining. Again, I look at it as a fan. What do I want as a fan? Can I listen to this record the whole way through? That’s great, because I try to make a whole record where people can listen to it the whole way through, and I try to sequence it that way. That’s not really done today.

Dead Rhetoric: What do you feel is different about touring with your own band versus going out with, say Rob Zombie?

John 5: It is completely different. Being out here with Zombie, we are playing massive places and everything is first-class. When I go out with The Creatures, we are playing smaller venues and things like that. But it’s so much fun. I love both so much. The reason why, is because it’s who I am. It’s from the heart and it’s real. If I didn’t want to do this, I could easily be at home and enjoying California weather and hanging out with the family. But I love playing guitar! I’m not doing it for the money, but for the love of music and playing guitar.

Dead Rhetoric: What do you feel that you’ve learned in music across the spectrum, and being in a variety of different bands over the years?

Dead Rhetoric: What can you say about your working relationship with Rob Zombie?

John 5: Oh my god. It’s so weird, because it really is like working with your best friend. We are all on the same bus, we are all in the same dressing room, and we do everything together: we eat together when we are in the venue; we are never apart from one another. The whole band. We are always together. We get ready in the same room because we are always yip-yapping and having a good time. I couldn’t be happier to be honest with you. It’s a perfect situation. I always wondered about that with bands that I would go see. I would wonder if they are friendly with each other, or if they were friends and things like that. I really hope that they would be, because that makes it a lot more fun.

Dead Rhetoric: What’s different about writing a movie score compared to a song?

John 5: I gotta be honest with you, I’m not a huge fan of scoring music because of the fact that it is kind of music that people don’t listen to. What I mean is that it’s not supposed to distract you. It’s not supposed to catch your attention. I like to catch people’s attention. I don’t want to be background music. But the only person that I would do it for would be Zombie, my brother – that’s the only person I would do score work for. Other than that, I’m not that big of a fan of it.

Dead Rhetoric: How do you view the role of the guitar in the future?

John 5: I think that the instrument is going to evolve, and it’s going to get bigger and better and more popular. People are playing guitar! There was a point where people were not playing guitar and it was terrifying. But I see people playing guitar now again, and it’s wonderful – thank God! It’s wonderful. I’m really happy about that, so I see that there’s a bright future for six strings and a piece of wood.

Dead Rhetoric: What are some of your favorite experiences you’ve had as a musician, either solo or in a group?

John 5: When I was a kid, I never dreamt of people knowing my name or people knowing who I am, or even me doing interviews. I never dreamt it because I thought it was impossible to get to that sort of level. I thought those guys were untouchable and things like that. Whenever I get to go on stage and play, and perform, it’s a dream come true. I get to [play with] my heroes – some guys have Spiderman or Superman or something, but my heroes are my friends today. I could never even imagine that. Every time I get to play guitar for people and have them enjoy it, it’s an incredible experience and I’m so thankful for it.

I’m in Chicago at the Four Seasons and I couldn’t be happier or more thankful. I can’t believe that I’ve doing what I do for so long and I’m so thankful for the fans and for everyone else, for letting me play for them. That’s why I like shaking people’s hands and having them tell me their stories. I tell them, “Thank you so much,” and I really mean it, for just listening.

Dead Rhetoric: What plans do you have going on over the rest of 2019?

John 5: I’m going to go to Australia with The Creatures for the first time. That’s pretty exciting. We are going to be doing a Halloween run, which goes into November, which is mid-west with some east coast and down south appearances. I have the Megacruise coming up. Every month I’m going to be doing something. Again, I’m so thankful and so excited about life in general! 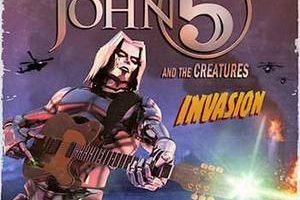