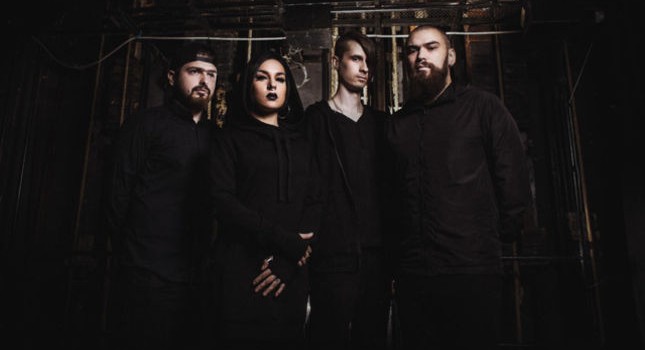 It’s not often that a band will grab you by the throat from out of the middle of nowhere, but that’s exactly what Jinjer did with their latest album, and first for Napalm Records, entitled King of Everything. The band completely defies genre conventions, instead opting for a unique approach that should rightly earn the band plenty of new fans as word gets around. Tackling sounds from groove to progressive to technical to serene, the band does truly find themselves as kings of everything.

Sending some questions to the band electronically, we were able to chat about topics such as the band’s signing to Napalm, being pigeon-holed by having a female vocalist, the origins of their name, and more. Check out what bassist Eugene Kostyuk has to say and check out the video discussed in the interview, “I Speak Astronomy,” as well.

Dead Rhetoric: Where did the name Jinjer come from?

Eugene Kostyuk: Well, it’s just a name. Originally there was no real meaning behind it… you know, when parents name a child John they don’t usually put anything in it, it’s just a good name. Though later on fans found some meaning, namely associating it with a distorted guitar sound: “jin-jer-jin-jer.”

Dead Rhetoric: How would you describe Jinjer’s sound to someone who is not familiar with the band?

Kostyuk: Oh, it is just like describing an image to the blind. No words will cover it ever, you should just listen to it. I will just add that if you like diversity and if you are open-minded you will definitely like JINJER.

Dead Rhetoric: You released an album and an EP independently before signing to Napalm Records for King of Everything. How do you feel the band has evolved from the beginning of your sound?

Kostyuk: We have made huge strides. Back in 2011 we wouldn’t be able to imagine what kind of music we would compose and perform now, technically, musically, and in all the respects. 100% we managed to build up our own style based on musical tastes of all the members of the band. To cut short and if you want me to put labels, we started from metalcore, went through groove and got to progressive metal on the last record.

Dead Rhetoric: You released a video for “Sit Stay Roll Over” last year and it grabbed 100,000 views in a week. How much of an impact did that make in terms of getting the band signed?

Kostyuk: I think it was like the last drop, Napalm wouldn’t sign us only because we had that video, no, apart from that we are touring non-stop, we have funs all around the world, and they come to our shows. We had two releases and they had some positive reviews. So we were working hard, putting so much effort in, and eventually got signed with Napalm

Dead Rhetoric: Ultimately, what made you choose to sign with Napalm Records?

Kostyuk: Hehe, Thomas Caser made us choose Napalm. After I talked to him, all doubts vanished. Moreover logically Napalm was the biggest label who offered a contract, though we also received offers from some American labels including Artery, for example.

Dead Rhetoric: Did you feel any added pressure to deliver a quality product, knowing that it was going to hit a larger audience?

Kostyuk: Of course we did! Moreover for the first time we were quite limited in time. When we signed the contract we had only a few songs, we were about to release a short EP, but Napalm needed a full length album, minimum 40 minutes. So we had to compose 7-8 songs in 4 months. But the band managed to accumulate all the energy, creativity and inspiration… to some extent it was a positive pressure – we made a very sincere album…we didn’t have time to work out the material for a year or so. We expressed what we had in us honestly.

At the same I have to admit that Max from Morton Studio in Kiev did an incredible job too. We managed to record, mix and master the album in two months, and the quality is just perfect! That was a wonderful experience.

Dead Rhetoric: What’s the typical songwriting process like for the band?

Kostyuk: Not typical at all, King of Everything is the first album which we wrote in 4. Before that we had two guitarists, and they took the most of songwriting together. This time this burden fell mostly on Roman, the only guitarist, and myself.

Dead Rhetoric: Was there anything that you wanted to see the band accomplish with King of Everything?

Kostyuk: Well, I believe we did everything we wanted to do on this album. All of us, everybody expressed themselves with full force.

Dead Rhetoric: Could you explain the vibe you were attempting to put out for the recently released video, “I Speak Astronomy?”

Kostyuk: It’s a unique song. In fact it is a confession, a very private and even intimate one. The sci-fi plot is just a shape which covers what lies inside. And we just wanted to make a video which would fit this plot and shape, to make a solid piece of art. We were really inspired by the movie Interstellar and a few more. But don’t be misled, it’s just the top of the iceberg.

Moreover we couldn’t make one more “band-performing-hard video”, we have two on this album – “Sit Stay Roll Over” and “Words of Wisdom,” and making one more would be just ridiculous. Jinjer have always tried to be different and diverse.

Dead Rhetoric: With a sound that feels unique and headed in fresh directions, is it troublesome to be saddled with a “female-fronted” tag?

Kostyuk: Oh, come on. We hate this tag. I know I won’t be able to avoid it, obviously, but isn’t it foolish to differ bands by a front person’s gender? And when you do something unique and headed in fresh directions, it is always troublesome to be saddled! But do we really need to be? I am definitely sure critics will go crazy inventing a definition for us, but isn’t it so much necessary to put a label. Why don’t people just like music…pure, sincere music?

Dead Rhetoric: Describe the vibe of a Jinjer live show. Do you expect to be doing more touring, now that you have a label backing you?

Kostyuk: We would love to tour till the end of 2017 non-stop. Our lives are something unique, the same as our music. We really love hardcore atmosphere and primal madness to happen in the moshpit, which we break with less energetic songs several times during a show – to make people calm down, relax and even meditate… and then again make them express pure anger with the next song.

Dead Rhetoric: What’s next for Jinjer once King of Everything is released?

Kostyuk: As I said above – we will tour. I don’t think we will start working on a new record until the end of 2017. We would really like to reach areas where we haven’t been yet – like the USA, UK, Japan, Latin America – playing a tour there will be a great achievement for us.