Jess and the Ancient Ones – Coffee with the King 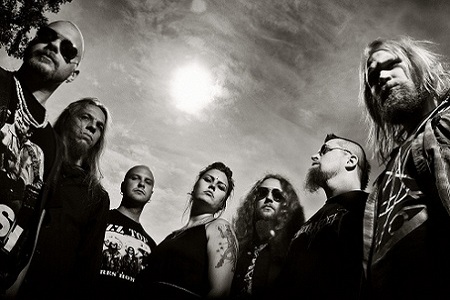 Don’t fret: Finland’s Jess and the Ancient Ones were probably just as surprised as you were when they got the call to open King Diamond’s North American trek. Logical signs pointed to King bringing out a young thrash or power metal band (i.e. Holy Grail, In Solitude, et al), but give the Dane credit for sticking his neck out for a band that is a relative unknown to his audience. Reaction has been mostly positive, based upon word from guitarist Thomas Fiend and this scribe’s attendance at the October 19 Pittsburgh, where the crowd didn’t have much difficulty with the band’s diverse and hypnotic occult rock sound. It also helps King gave the band a luxurious 50 minutes, something the band hasn’t let go to waste…

We snagged the ultra-calm and polite Fiend outside of the loading entrance at Pittsburgh’s Stage AE a mere hour before Jess and the Ancient Ones were to take the stage. Aside from the predictable topics relating to the tour, we learned that Fiend loves American coffee, and has quite the cool neighbor in the form of Therion’s Christofer Johnsson.. Read on…

Dead Rhetoric: You get the call to do the King Diamond tour. What were you doing when you got word you were on the tour?

Thomas Fiend: It was a Saturday, and I got a message from Thomas Corpse, who is the other songwriter. He pretty much said, “Listen, you’re not going to believe this. This is the coolest news ever, you’re going to freak out.” I thought it must have been some festival or something, but when he told me, it was surreal. It’s hard to describe in words – it sounds very cheesy. Both of us have been fans of King Diamond and Mercyful Fate for quite some time – it’s a total mind-fuck. After all, we’ve been busy with all kinds of things with many groups, but also the practical hassle of doing this. There hasn’t been that much time for me to think about, but it’s been in the back of my head. I’ll enjoy the thought when we’re on the road.

Dead Rhetoric: How have the gigs been then?

Fiend: It’s been better than awesome. It’s a very good match, also. King Diamond has heavier stuff, but also has layers of melodic [stuff]. It’s a different way to approach the same way of darker themes in both bands. The response has been incredible – the first three gigs have been sold out, and the others have been pretty much sold. There’s a small amount of fans who are just coming to see us, and a lot of people who have never heard us before, who come and say, “We love this. We need to check this out.” It’s one of the most important aspects of this tour that we get visibility and we can spread our music to more listeners.

The first gig, I remember, I was the first one onstage and the screaming and amount of people there it was like, “Holy shit.” I felt that this was going to be a success. For me, this whole band stuff, I live and breathe it. I have to mention, it takes a lot of personal sacrifice, so for me, being on the road, it feels like home. So I’m enjoying being at home.

Dead Rhetoric: Do you think you can pick up on some of their older fans based on your sound?

Fiend: Yeah, and when we see some of their audience that is older, but not that old and are listening to our stuff – they knew they’re getting a treat when they hear some of our riffs. At the same time, we see there’s a younger audience, a different kind of audience than Deathchain. [Fiend’s death/thrash side-band.]

Dead Rhetoric: Is this your first time in America?

Dead Rhetoric: What are your impressions?

Fiend: It’s lovely. The weather of late has been really warm and moist, which I enjoy. Now it’s been a little more like back home – we just came from Canada.

Dead Rhetoric: Pittsburgh gets all four seasons of the year, and you’re getting the fall, which is pretty nice around here.

Fiend: I’m from Finland, but I live in Sweden, so it’s a little warmer where I’m living. To put it briefly, it’s the people. The people are so warm, open, and kind, unlike us Finns. We’re very isolated and grumpy. That type of stereotype. We’re a little reserved. I’ve lived in Spain, and now I live in Sweden, so I’m used to open people. America has been really good for us so far. The people is the first thing I’ve noticed, the second is the coffee. I just love hazelnut coffee.

Dead Rhetoric: Anything pumpkin flavored is huge this time of year. Highly recommended. And cinnamon.

Fiend: I saw the cinnamon, and I’ll try the pumpkin! I guess there’s some sort of Halloween coffee.

Fiend: I’ll have to get some!

Dead Rhetoric: How is the next full-length coming along?

Fiend: Part of that puzzle is the upcoming Casteneda 10-inch, which is out online. The next album, we were supposed to be in the studio right now. We took a short break last year, and with the EP and with the single, you can hear where we are going, that it’s a smooth transition. We don’t plan those things, but we really make the music and see what kind of sounds and arrangements we get. We’re digging deeper into the blues and surf rock. You’ll hear some surf rock tonight. It’s pretty much the heavy elements are fading away…

Dead Rhetoric: You had a nice balance on the debut, so you did push a lot of that metal stuff to the brink.

Fiend: Part of it, is that we’re those extreme metal dudes playing lighter music. I think we did well with the first album.

Dead Rhetoric: You get lumped into the female-fronted occult rock thing quite often, though.

Fiend: There’s been some comparisons to other bands. Time is the best indicator and it will become more and clearer we have our own sound. On the first album, you could say part of the sound is lack of perspective or that we’re evolving as writers.

Dead Rhetoric: The debut was done two years into the band, so it’s understandable.

Fiend: And you can hear the metal background with three guitarists where it’s very full and thick, but we move. As well as with extreme metal stuff, it’s hopefully a part of our sound that we will change. We feel that we have evolved as songwriters and musicians, and also as a group.

Dead Rhetoric: What do you have in store for the three guitars?

Fiend: We want to avoid that thing where it gets too packed and there’s no room to breathe. We tried to be conscious of that and give more dynamics and space, like easing off a little bit with the three guitars.

Dead Rhetoric: Do you get tired of being lumped into the whole female-fronted occult rock conversation?

Fiend: Not at all, mainly because I’m the lone wolf of the band. I live in a forest in Sweden, which is a nice environment to make music. This sounds like a cliché, but I’m not following what’s going on in music. I live a busy life. For me, the occult rock thing, I like to think of it as a music genre. I don’t want to offend any other bands – I have no problem with what other people do, but I can sense that there’s many bands who are not serious about that stuff. It’s just symbolism and hiding behind that veil of mysticism. It doesn’t bother me. I find it cool to find mysticism where you don’t expect it – you see a movie, read a book, or listen to music that’s not Satanic. For me, I’m totally at peace with all that categorization. People can call us what they want. I know why I’m doing this.

Dead Rhetoric: What’s your living situation like? Living in a wooded area in Sweden sounds intriguing.

Fiend: That’s what that whole thing is about: To put a long story short, I’m a member of a Sweden-based dark esoteric organization. It was five years ago or something, I was in Sweden on a related event, and Christofer Johnsson from Therion, he was there, and said, “I heard you’d like to move to Sweden.” It happened we got this solution where I’m neighbors with Chistofer, where we have this little musician/mystic community. When he’s tour, I’ll drive the guys to the airport and vice-versa. We understand what it is like to be away.