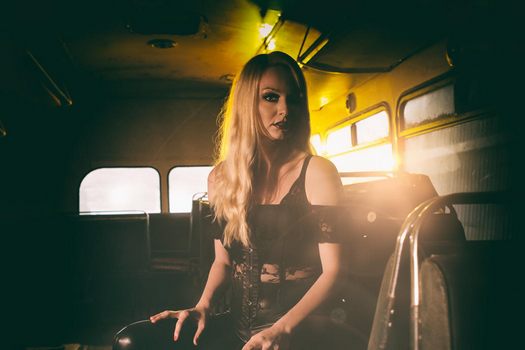 A force to be reckoned within the melodic rock front, Issa is coming up on the release of her sixth full-length album in a span of ten years. Combining just the right amount of heavy riffs, soaring vocal hooks, and graceful melodies, there’s much to enjoy in her music for AOR and hard rock fans. Her latest release, Queen of Broken Hearts, captures all of this melodic magic and puts it on full display from beginning to end. We spoke with Issa herself to get her insights on the release, stand out moments, how being a parent has changed her, and more.

Dead Rhetoric: How do you feel Queen of Broken Hearts compares to your previous releases?

Issa: This album is more similar to my first album [Sign of Angels] so it almost feels like I’ve come full circle, with the music and style of the record. Every album sounds a little bit different with some being softer or heavier, but in listening to this one in its entirety, you get the feeling of my first release. I’m very happy about it.

Dead Rhetoric: So was that an intentional shift or something you just picked up on after the recording was finished?

Issa: It was something I heard when it was finished. We have a sort of direction with the music, but as the songs develop in the production – we start with a bunch of songs and at the end of it, we have some sort of a sound to it. Then there’s also the other musicians that come in as well, and they have their own style. Altogether that creates the feel of the album itself. So it was something I heard after we were finished and I said, “God, this sounds so similar to Sign of Angels.” It truly does, and I love it. It’s just what I want it to be.

Dead Rhetoric: What can you say about the players that were assembled for Queen of Broken Hearts?

Issa: They are all great. Alessandro Del Vecchio does the keyboards and he’s sort of in charge of the other musicians. They are local to him and they work together in that way. We worked together on the previous album as well. I had Simone [Mularoni], Marco [Di Salvia], and Andrea [Torricini] on that album as well. It sounded great, so we decided to go down the same route and have the same people playing the album. They are all doing their part and it sounds fantastic. I’m very happy with everybody.

Dead Rhetoric: Is there a song that stands out, or has a special meaning to you?

Issa: All of the songs are good – even choosing the video, I couldn’t pick one or two songs. I found it really hard to pick songs this time. “Derive” is a great song – I think it’s a bit different. It was more challenging, vocally, in the way that it’s more symphonic. “Die for a Life With You,” I love that song! “Queen of Broken Hearts” is a great song. “Blue” is a smashing ballad, I love it! They are all great songs, I can’t really pick [laughs].

Dead Rhetoric: That’s a good problem to have.

Issa: It’s very good. I feel very fortunate. It’s the first time – we’ve had lockdown and everything. The whole album was recorded while we were all staying at home. I’ve got two small children so it was hard work to be recording, or even get time to sit down. Even though you have more time, you end up getting disturbed all the time. But there is something nice about it as well. There’s a calmness in that you don’t have to go anywhere. That went into the record, it’s almost like it’s more thought-through.

Dead Rhetoric: How would you describe your relationship with Frontiers, it seems like you have been with them for a long time?

Issa: We have a great relationship. I can’t believe it. It’s been 10 years and we have done so many albums, projects, and things. I am very fortunate. In my time with them, I’ve seen acts come and go and I’m still hanging around. It’s all good. You can also see the label developing, becoming bigger and bigger. Every album we do, you can see how things are progressing. We’ve got a good relationship and hopefully we will do more in the future.

Dead Rhetoric: What makes a song feel like an anthem to you?

Issa: It has to be recognizable. Something that you remember. It has to be a catchy song I guess. But some of these songs, in the genre we are in, don’t have to be really catchy either. But for me, an anthem would be something that I can’t help but keep singing [laughs]. Hopefully this album will have a few songs that you will remember.

Dead Rhetoric: Is there anything you do to keep your voice in shape?

Issa: It’s funny you mention that. When I recorded my first album, I had some massive troubles with my voice. I was doing so much at the time. I was working, gigging on the weekends, and recording. I was full-on all the time. With that album especially, I had to do a lot of stuff at night – going to the studio and recording vocals. One day I came into rehearsal and I was singing and my voice just gave out. It was startling. I went a long time trying to get over that. I went to doctors and had steroid inhalers and all of that. So it took years to get everything back. I know you can’t hear it, but for me, that was a huge difference in the way my voice acted.

These days, good sleep and trying to take care of myself. I don’t put too much pressure on things. If I’m going to a recording session I try to warm up in a natural and nice way, instead of just going full-on and I think it helps. I’m not getting any younger either. I have to try and take care of my voice.

Dead Rhetoric: What challenges have you had to overcome to make Issa more successful?

Issa: I can’t think of any. There hasn’t been any huge challenges. We work together well and I like to do what I like to do. I feel really fortunate with what I do. I think this time around, doing the videos for the album – that was a challenge. I normally have a band, or I can fly over to Italy and have the guys there. The ideas are usually there too. This time, to have no ideas and have a full lockdown, we couldn’t travel to different areas and that made it hard.

It was also hard to make two videos with just me. It was a real challenge. That’s why I got an actor, Phil, to come in for “The Way Out” video, and do something totally different. I didn’t want this limelight, or at least too much me, and I think going forward it’s something that I feel like I want to do more of. To make videos that are not just me – story videos or that sort of thing. It’s an avenue that I’d like to explore and I think I’ve learned a lot about how everything works this time. I’ve learned a bit about myself and these videos.

Dead Rhetoric: On the other side, are there any moments stand out in your time with Issa?

Issa: With my music career, I have been so so lucky to have done songs with other acts. There’s a lot of great moments that I can think of, but nothing really compares to when I’m recording an album. I think especially with this album, I’ll remember it. I have a very young child and he had to come with me with the recordings. He loves hearing it anyway – that was really something special. All in all, I have had opportunities to sing with some incredible people and there’s a lot of great moments that I have had.

Dead Rhetoric: You’ve mentioned your children a few times. Does being a parent impact the way you think about music – either from a writing or career perspective?

Issa: It does. Things change, I guess. You want to make them proud now. That’s a totally different thing. It doesn’t matter what anyone else thinks about you because you are the world to them. That’s what means the most in the world. But when it comes to music, with the COVID situation, it has been difficult. But thankfully we haven’t missed out on anything. Now that the kids are getting a little bit older, I can start looking at doing more things. Maybe putting together a tour together when all of this is over. Having kids totally changes everything.

Dead Rhetoric: What does rock music mean to you?

Issa: I was born in the ‘80s and I was very influenced by ‘90s music growing up. When I was about 17 or 18, I started touring and I was in this girl group. We did all sorts of songs, and our manager, he loved all of the older rock songs. So that introduced me more to all of these songs. That’s sort of where I found what I liked to do. Even though I didn’t grow up with it, I kind of found what I liked to do. When I was on stage, with these rock songs had a lot of power. That’s how I got into it. I love listening to rock music – I have a huge number of friends that are in more progressive bands and I’ve done some different bits. I love it. But I also like lots of other music as well. I don’t just listen to rock music. I’m very versatile. But these days it’s a lot of “Baby Shark” [laughs] and those sorts of things at home. I don’t have as much time to see who is coming out with new stuff, but hopefully soon.

Dead Rhetoric: The album comes out soon. What else is planned for 2021?

Issa: I really have no idea. I have been thinking about doing some online stuff. But other than that, planning any form of anything seems to be out of the question at the moment. I’m just taking one day at a time. My immediate thing would be to meet up with some friends and go out for a drink. That would be lovely. But other than that, for the rest of the year, we will have to take it as it comes. We are pretty lucky in the UK, as we are talking about having everyone vaccinated by July, so hopefully things will be back to normal soon.