It’s always nice to find a new band that wants to embrace the boundaries and try to experiment. Newcomers Iotunn have an epic sound that falls under the umbrella of progressive, but outside of that, they are a tough nut to crack. Melodic and atmospheric moments, extreme and power metal elements, and lengthy cuts that take you on a journey all sit as a part of their sound. One thing for sure – it’s mesmerizing and bound to end up on the radar for many who dare take the trip with them. We grabbed guitarist Jens Nicolai Gräs to get his thoughts on the band’s debut, songwriting process, what lies ahead, and much more.

Dead Rhetoric: How do you describe Iotunn as a band? Any defining characteristics?

Jens Nicolai Gräs: We have so many characteristics I would say, but we tend to write long songs and we have a good combination of hard hitting metal and atmospheric passages. We also tend to play Nordic stuff. As far as sound goes, I think that’s about it. With subgenres, people tend to call us this and that [laughs], so I’m not going to go down that road. It’s up to them if they want to call us something specific. We don’t go into the creative process with genres in mind or characteristics. But we are always curious and we like to experiment. We also like to work often so we have tons of ideas and we work for the best. We hope that we can make good decisions and separate the bad ones from the good ones.

Dead Rhetoric: How do you feel Access All Worlds works as an introduction to Iotunn?

Gräs: It’s honest. It represents the band as a collective, as well as us as individuals. It’s the combination of a few years of intense work, and it’s the starting point for the first chapter, until we get to the second chapter…which will be the second album.

Dead Rhetoric: What goes into the songwriting process for a particular track? Do you take any special consideration for the longer songs?

Gräs: It doesn’t matter for us how long the songs turn out to be, as long as they are representing what the song should be. As long as the final arrangement sounds right for us, we are happy. When we go into the writing process, it always starts off with my brother Jesper and I – we write all of the guitar parts and we put something together that can be a further investigation into finalizing the song. At that point, it’s about all five of us working in circular movements and throwing ideas back and forth. At the end, we have finished songs.

Dead Rhetoric: What are your thoughts on balancing atmosphere and heaviness? What importance does contrast hold for you?

Dead Rhetoric: Can you speak about the lyrical direction of the album?

Gräs: When we contacted Jón [Aldará], our singer, we basically told him that he was totally free to come up with whatever he thought was right for the music. So he came up with this science fiction storyline where you follow a group of humans who are found on this spacecraft – they are on a mission. It’s not that the mission itself has a specific goal, it’s more like a mission of discovery. They are just going into deep space to find answers to the problems that are appearing at home, their home planet. The question is whether they will find answers or solutions, or will they be lost in space, or will they even settle somewhere else in space.

I would say that there is a storyline throughout the album, and they encounter different cultures on some very weird planets, but the underlying theme for the album is more about the voyage itself and the complexities that lie within. It’s very much about the idea of ‘the more you know the less you know’ – everytime they find answers, new questions pop out. How they deal with the contrasts between being able to go anywhere, hence the title Access All Worlds, and not being able to go anywhere because the universe is too vast for you to be able to access everything. There’s a lot of doubt and anxiety rooted in the choices there and what they have to make. At the same time, you could see the entire storyline as an analogy that sits well with what a human individual has to deal with.

Dead Rhetoric: How did you end up signing with Metal Blade for your debut?

Gräs: We decided that if we were going to get anywhere with the band, we would need good professional relationships, so we contacted a bunch of labels. We had heard a lot of good stuff about metal blade, and Jon is signed to them with Hamferd, so we thought it would make sense to have both bands on the same label. So Jon contacted them, and within a few days, they replied and said that they liked what they were hearing and asked if we would look at a few proposals. Then we started negotiating. So in summer of last year, we landed on the same page, and we have been very happy since.

Dead Rhetoric: What would you like Iotuun to achieve as a band?

Gräs: It’s very important for us to have the day to day perspective on things. So it’s important for us that the band chemistry and good spirits is maintained for us day to day. That in itself is a huge achievement and brings meaning and joy to our lives. For the further future, we would like to show this debut album the respect we feel it deserves, in terms of having the opportunity to do some cool live stuff, when the world opens back up again. In these times, when we are set back in terms of concerts, we are very focused on the writing process for the next album. For us to make a great second album is also very important and a clear goal for us.

Dead Rhetoric: As you were just mentioning, what challenges do you feel a new band faces in the midst of the coronavirus and releasing a debut?

Gräs: The biggest challenge is of course, the release of the album and following up with live gigs. We cannot deliver a satisfying package in those regards. We can’t play live at the moment, and that’s the biggest issue. We are trying our best to work within this situation as well as we can. As I’ve said before, we try to focus on songwriting processes and hopefully we can get some good opportunities on the other side of this pandemic.

Gräs: Right now, we are in planning mode. We are working very hard to plan concerts for the end of the year, and for 2022. We are also writing a lot of stuff all the time. So hopefully during the spring/summer, we will start tracking drums for the next album.

Dead Rhetoric: Based on what you have done for the second album, how do you feel it compares to Access All Worlds?

Gräs: That’s a tough question, because there are some similarities between that and what we are writing for the next album. But a lot can still happen. We can still write new songs and still delete songs [laughs], and I know for sure that there will be some new elements on the new album but I can’t promise too much at this moment. Then you have the entire aspect of the visuals, lyrics, and concepts, which are totally open right now. The next album could be about the French Revolution or pancake recipes [laughs]. I don’t know – we don’t have the full perspective about the whole body of the next album yet. But it’s very exciting for us, it’s interesting to be in this early phase. 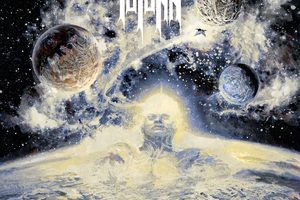