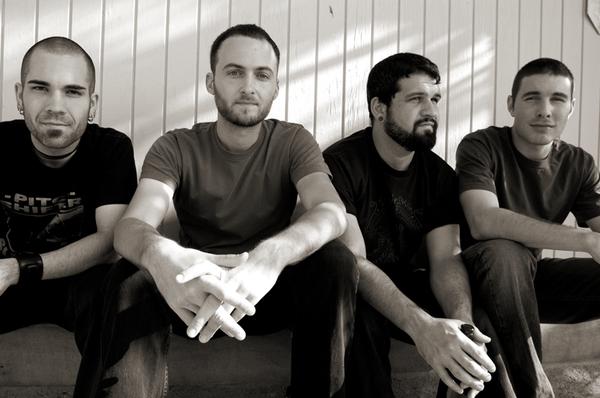 One of the real darkhorse albums of 2010 turned out to be Intronaut’s Valley of Smoke. Parlaying the vaunted post-metal, metalgaze sound popularized by Isis, Neurosis, and Cult of Luna (and many more, mind you), Intronaut’s own take on the style is starting reap benefits, primarily because these Californians are infinitely more progressive-minded than their contemporaries, just check out the musical tenacity on display during album opener “Elegy” and “Miasma.” Better yet, singer/guitarist Sacha Dunable prefers to actually sing, ditching the way-too predictable gorilla roar so many vocalists of this ilk are apparently tied to. It’s quite refreshing.

We’re not about to hail these guys as the “next Isis” or anything (that would be awfully dumb), but they’re easily one of the more captivating bands on the North American scene. Since Valley of Smoke is a bonafide rocker, we snagged Dunable for a round of inquiries that entailed the sometimes pesky Isis comparisons, the new album, and how they’re staying afloat on one of metal’s biggest record labels in the form of Century Media. Here’s how it went…

Blistering.com: When you first came out, the usual Isis/Neurosis tags were lobbed at you. Were you comfortable with those?

Sacha Dunable: Well, I’d be lying if I said that we had zero influence coming from Neurosis, or even Isis. Those are great bands and we obviously had their records prior to starting this band, but we were trying to go about things in our own way, and anyone who actually listens to any of our records will probably realize that. So yeah, I guess that when people reduce everything you’ve done down to a short description along the lines of “sounds like Neurosis,” it’s not favorable but what can you do?

Blistering.com: How does one react to being already hailed/praised by critics before you can get really get rolling and find your true voice?

Dunable: Do you mean the reactions to our first record? If so, I don’t know if we actually realized that we would have evolved our sound so much over time, so we probably weren’t thinking along those lines. I guess back then it really encouraged us to keep making music. We probably wouldn’t have been as motivated to go out and tour as much if there hadn’t been as much support from the press and Goodfellow, our label at the time. And considering that we were a new band on a fairly small label, it opened a lot of doors for us. In hindsight, it probably made us pressure ourselves into not getting lazy with the records that came after that.

Blistering.com: Do you think around the first album the band was still getting comfortable with each other?

Dunable: In a musical sense, yeah. We had all known each other for like ten years before starting Intronaut, except for Leon [del Muerte, ex-guitars] I guess, but even then we had enough mutual acquaintances that it wasn’t weird, so on a personal level everyone got along fine right away. But yeah I do remember it being harder to write songs back then. I remember specifically the songs “Fault Lines” and “Rise To the Midden” being completely stripped down and rewritten at some point. We were still figuring out everyone’s strengths and weaknesses, and still establishing each member’s role in the writing process. We over-thought a lot of things about that first record and even the Null EP, and that might be what makes them so weird and cool.

Blistering.com: Going into Valley of Smoke, was there already an inclination as to how melodic the album would end up sounding?

Dunable: Yeah. I think that harmony has become the new aspect of our music that we obsess over and try to push the envelope with, so it doesn’t take much for that aspect to find it’s way into most of our music. We’re certainly not as angry, or “angsty” as we were five years ago, so we certainly aren’t forcing out anything resembling that on this record.

Blistering.com: Was anything gained/gleamed from touring with Cynic? You don’t sound alike, but in approach, there are some similarities…

Dunable: It’s hard to say. I mean, you take away something from every band you tour with. What to do and what not to do. On one hand, there might be something about one band that makes you want to improve a certain aspect of your music, and on the other you make mental notes about what NOT to do. With Cynic, the thing I appreciate about their newer material is their harmonic and textural palette and how there is this constant kaleidoscope of sound and dynamics that comes across really well in a live setting.

Blistering.com: Lots of clean, but also well-sung growling on Valley of Smoke. What prompted you to go this route?

Dunable: It’s just about using the voice as another musical instrument to have at your disposal, rather than screaming over the music the whole time. And like I was saying before, getting on stage and growling at people for a 45 minutes just doesn’t feel as natural to me as it did five or ten years ago.

Blistering.com: Obviously, the progressive angle of the band is still very much a priority, so often do you have to hold back and allow those atmospheric moments shine through?

Dunable: I honestly don’t see it as two different things. The fact that there is pushing and pulling, or effort put into balancing the two in a certain way, is pretty much what the word “progressive” means to me in the context of music. We’re trying to make technical music not so people will go “wow, this is so technical” but rather as a challenge for ourselves to make it listenable and enjoyable on an emotional level first, before you analyze it and realize that there’s a cerebral dimension to it, waiting to be enjoyed as well.

Blistering.com: Songs like “Miasma” and “Sunderance” are quite deep and challenging, so do you feel you are just starting to scratch the surface with where you really want to take your sound?

Dunable: Probably to some extent. Though, each album does represent a different time period, or a different state of mind about what we want to do with the music, so I’d say that each record is a valid statement from this band. Each record is kind of like a reaction to the last one, where we take what we believe to be our strengths and expand on them. I’m sure the next record will be no different. So I don’t know if we’ll ever really break through the surface being scratched, so to speak. Or if we do, then in my opinion it doesn’t qualify as progressive.

Blistering.com: You’re backed by one of the bigger metal labels at the moment, but describe some of the challenges (primarily economic) you face as you try to push the band forward.

Dunable: Touring is not easy for us, unfortunately. I don’t know what to blame that on. Could be the ever-so-cliche economy excuse, or the fact that we’re not a “flavor of the month” kind of band, which is fine with us. Either way, it’s been hard to turn it into a sustainable operation.

As for the label thing, people have laughable misconceptions about what a label’s role is. Maybe in the 80’s or 90’s it was different, but things like “tour support” are not what you think they are. And I’m not saying anything bad about Century Media. I love them as people and a label. Honestly I can’t imagine which one would be better to work with right now. Here is an actual company, with employees who are paid to promote our records and account to us on time. That’s unfortunately not common with all labels, at least to get both of those things. But the fact is that record companies aren’t generating the same kind of money they were ten years ago, so you’re on your own most of the time when it comes to touring.

Blistering.com: All of you guys came from other bands in the California metal scene, which is a pretty big scene, so do you get a sense that particular scene is overcrowded, just like the regular metal scene is?

Dunable: I don’t know if I’d describe it as that, but then again I’m not as involved with the “scene” as I was five or ten years ago. Yes, there are lots of bands I guess, but I don’t really see that as being good or bad. It doesn’t seem to affect us at least. We’re friendly with most bands from here, at least the ones we encounter. I guess that’s something interesting about a big city like LA. You’ll find out about some band, check them out, and realize they’re from the same city as you, yet you’ve never seen them around or anything. So I guess you could say we’re pretty spread out here.

Dunable: We have a couple tours coming up in the spring, and I’m sure more will follow soon enough. I have a couple side project records coming out next year too. One from a band called Graviton, and one from a still-untitled doom metal kind of band. We’re in the middle of recording that one right now. Danny [Walker] recently recorded drums for the new Exhumed, which will come out in the spring, followed by some sporadic shows, as well as some Murder Construct stuff. Joe [Lester, bass] has been doing some studio stuff for a big time hip hop/R&B producer. Dave [Timnick, guitars] played some drums on a record with Justin Chancellor [Tool] that will probably come out soon too.