Into the Great Divide – A (Guitar) Hero’s Journey 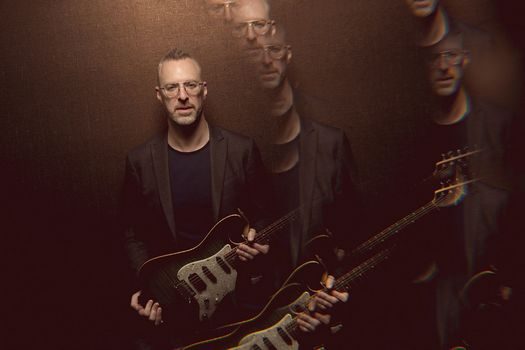 One of the most frequent complaints leveled against instrumental music is how it ends up being directionless and self-indulgent. Nothing more than a musical showboating display. While some live for that type of approach, there are more that are using the medium for compositions that are more atmospherically-inclined. Then there’s the recently released debut of guitarist Zack Zalon’s Into the Great Divide, which takes things one step even further.

In a radical move, Into the Great Divide places a short spoken section before each track, setting the stage for what is not only going on in the music, but also the storyline itself. The result is an instrumental album that feels entirely focused and ever moving forward to a goal. We caught up with Zalon to pick his brain about creating a ‘rock novel’ and the strengths of his approach, along with how he acquired Mike Mangini on drums, and even some thoughts on progressive music as a whole.

Dead Rhetoric: Could you discuss the creation of a ‘rock novel’ as opposed to merely an album?

Zack Zalon: To me, a rock novel uses a narrator to help guide the listener on a journey, moving from chapter to chapter as we go along. I came up with the concept as a tool to get around the issue that I feel plagues most instrumental records, which is that there’s no real context. On an album with vocals, we have the benefit of the lyrics to help us to contextualize where we are supposed to be in any storyline, but when you remove those lyrics you create the potential for the music to lose all of that meaning, and to leave the listener without any ability to connect with the story that the composer is trying to tell.

So I used the narrator to help bring people along, and then composed each track accordingly to fit with that particular chapter of the story. If you listen closely, you’ll hopefully note that each song has a particular feel to it: tempo, energy, etc. that all matches with where we are supposed to be in the storyline, helping to bring the listener from one chapter narration to the next.

Dead Rhetoric: What do you feel are the biggest strengths in using this type of storytelling – The Hero’s Journey – and setting it to music?

Zalon: Well, I wanted to tell this story from the outset. I felt that it was a universal story of ‘triumph over adversity’ and I hoped to use this as an opportunity to connect with people on that specific storyline. My medium of choice was instrumental progressive metal, which certainly isn’t the most commercially accessible format, but it’s how I wanted to communicate. And I strongly believed that having a story that people can connect to increase the impact of the music itself. So in some ways it was a bi-directional thing, where the music helped tell the story, and the story helped bolster the music.

Dead Rhetoric: Sometimes instrumental music is looked at as being too self-indulgent – did this approach allow you to focus on doing what was needed to advance the story?

Zalon: Totally – again, the idea was to create a storyline that people could follow without the benefit of lyrics, and this really helped me to achieve that.

Dead Rhetoric: Do you feel that the introductions to each track help to make it more accessible for those who normally shy away from instrumental music?

Zalon: I hope so – my goal was to make it easier to understand, and each track was so specifically composed to match with each of the chapters in the story. So far the response has been overwhelmingly positive, so perhaps that means that it’s working!

Dead Rhetoric: On the same token, do you feel anything is lost by giving the listener a more direct way to approach and interpret the material?

Zalon: There’s a LOT of content inside each of the tracks, and a ton of thought that went into planning how to compose a story within the music, so there’s no lack of material to assess and analyze if the listener wants. My goal was to provide a set of guideposts to carry the story along, but not to tell the entire story word-for-word.

Dead Rhetoric: There is an almost meditative/reflective vibe to the music – was this intentional?

Zalon: Not really, I think the music just reflects what I was thinking and feeling as I composed and performed them. But then again, I’ll share with you that so much of the album was done at night, after my kids went to bed. I recorded most of it at home, and so you can imagine my surroundings – it was almost always late, dark outside, with a quiet house, and inside I’m cranking away at bringing the album to life. Maybe that environment – combined with storyline’s attributes – helped add that vibe to the whole thing. Maybe you can feel some of what my surrounding felt like as I was creating the album.

Dead Rhetoric: What else do you expect people to take away from listening to the album – it seems obvious, but is this music to be experienced, instead of just listened to?

Zalon: I couldn’t have put it better myself. Right – I’d like it to be experienced, it was composed to move in stages from beginning to end, and at least for me that’s the way that it’s best represented.

Dead Rhetoric: This was your first experience recording an album – what do you feel you learned from the process?

Zalon: Everything! I was learning on-the-fly, and it was pretty exhilarating. I had to learn engineering and recording processes; had to learn about new DSP tools and all of the recent music-technology enhancements; had to learn programming and sequencing; etc. But the most critical lesson was in how to build a workflow that would allow me to compose music as I went along, and then to perform each instrument independently but in a way that would ultimately end up sounding like a live band. That was incredibly difficult – it’s not that hard to record on today’s digital workstations, but getting a finished product that sounds and feels right is much more difficult than I would have imagined when I started.

Zalon: I live in LA, and so finding great voiceover talent isn’t that hard. I actually wrote the narration first, before I composed any music, so that was step one of the album. Getting Mike involved took longer – I was almost done tracking before we sent the music to Mike. The album was produced by the great Richard Chycki (Rush, Dream Theater), and he had the relationship with Mike, we sent him the tracks while he was on tour with Dream Theater, and he became a fantastic advocate for what we were attempting to accomplish. Eventually we were able to get into the studio with him, we tracked at the Foo Fighters’ studio on their legendary Neve console, and the result is one of the most incredible drum performances I’ve ever heard.

Dead Rhetoric: Where would you like to take the music of Into the Great Divide from here?

Zalon: Into The Great Divide is a broad platform for communicating ideas through instrumental music. The subjects may vary, but the ideas will always be the same: universal human experiences that we can all understand and share in. So whatever we do next will look to undertake the goal of expressing more of those stories, in different ways, but with that thread of connecting with people on common experiences.

Dead Rhetoric: What do you feel should define progressive music?

Zalon: I’m certainly not the expert on progressive music, but I would imagine that anything that pushes the boundaries is by its very nature progressive. I think that experimentation is critical, that people who want to do prog should look to take risks, because many times what makes a great prog record is that it could have actually sucked, but didn’t! Not sure if that makes sense, but it’s how I see it.

Dead Rhetoric: What plans are in the works for the next 6 months or so?

Zalon: We have a number of things planned, we’re holding our ideas close to the vest right now but we’re heavily invested in building out our repertoire over time. Watch this space.