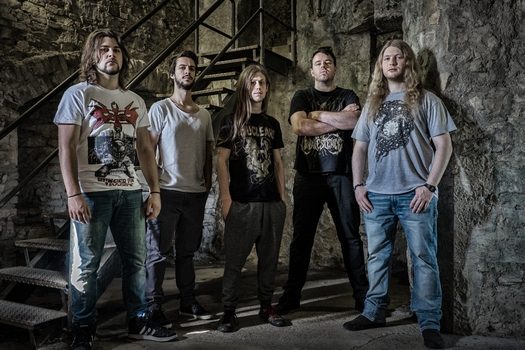 Modern death metal takes all shapes and forms nowadays. In the case of the band Integral, their music makes all sorts of twists and turns but all comes together under that modern title. In fact, Integral may fit comfortably with the death metal tag, but they aren’t afraid to diversify as much as possible. Their debut, Resilience, makes a strong case for the up-and-coming act.

Juggling melodic death metal, tech-death, and even groove, Resilience serves up death with plenty of variety. For their debut album, the level of polish and integration of these ideas is impressive. It’s catchy, and the technical structuring gives you even more reason to come back and dissect it further. Being the curious bunch we are at DR, we sent drummer Agostino Buttarelli an email to pick his brain about their debut, influences, and where they are going from here.

Dead Rhetoric: How do you explain the sounds of Integral?

Agostino Buttarelli: When Integral was born in 2013 the whole idea of the band was to include both the death metal sound and elements taken from other genres like fusion and ambient, as well as melodic openings and meter changes. What came out is a mixture of these intentions with the playing styles of each member.

Dead Rhetoric: There’s a lot of different stuff going on musically with Resilience. What’s your technique for songwriting?

Buttarelli: The songs were written and structured using mainly Guitar Pro 6. Starting from nearly definitive guitar tracks we wrote down the drums and the bass and finally we merged all together and did the refinements. The vocal parts were added when the instrumental part of the songs was completed.

Dead Rhetoric: How do you draw a line on whether something is too over the top, from a technical standpoint?

Buttarelli: Nice question! I think we do not have an established limit to whatever we want to play from a technical point of view. It’s all about musicality. When technicality and musicality are in conflict we must understand that musicality comes first because I think the aim of a song is to entertain and communicate something, not to show your skills off as if you were a juggler.

Dead Rhetoric: The lyrics are more introspective and personal than most death metal releases, where gore or space is more of the norm. What drew you to this area for the album?

Buttarelli: I am happy you noticed this because I think it is a peculiar aspect of our release. What drew us to this area is the fact we don’t really like themes like gore or space. In our opinion the typical death metal band that talks about gory murders or aliens devouring humans has become a cliché, and we don’t like clichés to be honest. We don’t care about what a band of our genre is supposed to do regarding lyrics, we just write down what we feel and works for the song.

Dead Rhetoric: Where does Integral pull their influences from?

Buttarelli: Of course our influences include bands like Obscura, Revocation, DevilDriver, Necrophagist, Death, Beyond Creation, The Faceless, Gorod, The Black Dahlia Murder, As I Lay Dying, In Flames, and Sadist. When it comes to the musical education each member of the band has his own background, but we basically grew up as rock and metal kids as many do.

Dead Rhetoric: Is there one song on Resilience that defines what Integral is all about?

Buttarelli: I can’t think to one specific song because in my opinion there is more than one. We tried to impress our brand in most of the tracks and so I think you can guess what Integral is all about from several songs of the album.

Dead Rhetoric: What did Ettore Rigotti bring to the mix?

Buttarelli: He certainly brought taste and experience. I think this mix was not one of the simplest because the riffs are really intricate and it’s not easy at all to make all the instruments to be heard. We think Ettore made a really good work and gave to our release a distinctive sound. What’s better than that?

Dead Rhetoric: You also had guest spots from Steffen Kummerer and Tommy Talamanca. How’d that come about?

Buttarelli: Yes, we are really happy to have them in our first album, we didn’t expect this at all! As for Steffen, our ex guitarist and our bassist Marco met him some years ago at a concert in Germany and gave him our demo. Then we kept in touch and when we asked him if he wanted to do a guest vocal appearance he accepted. As for Tommy, we asked him if he wanted to play a solo for the album when I was recording the drums at his studio Nadir Music in Genova. We were stoked to hear him say “Yes, for sure!”

Buttarelli: Yeah it was tough to have a line-up change but it was necessary for the sake of the band. Massimiliano is an excellent guitarist and we think with his contribution we will improve a lot.

Dead Rhetoric: What do you envision for the band’s future, a few years down the road?

Buttarelli: Well, I think within two years we must at least write our second album. We would like to do this as soon as possible but I think that two years from now is a reasonable time. Before this we would like to tour Europe at least. We’ll see what we manage to achieve!

Dead Rhetoric: More immediately, what else do you have planned for the rest of the year?

Buttarelli: Our primary task is now to become a well-oiled touring machine. We are working hard on our live show because we are starting out our career as a band and we believe that a strong and solid live performance is necessary to be successful. 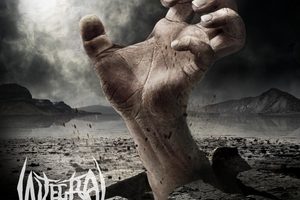