Insomnium – Beyond the Harrowing Years 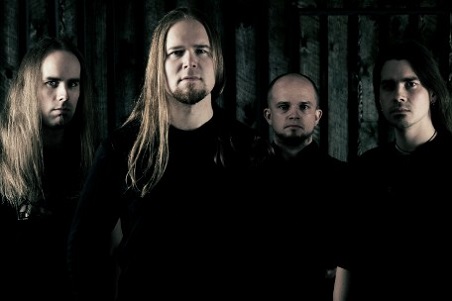 Currently on their second North American run, Finnish melodic death metal upstarts Insomnium are coming to find what a quality back catalog and increased label support will do on these shores. On their maiden 2007 run in support of Katatonia (Blistering attended the tour’s stop in Cleveland and was sick as a dog…but persevered), the Finns were still an unknown commodity, even if their firebrand take on the Amorphis-meets-Sentenced sound was starting to boil. This time around, clap-alongs, spirited audience participation, and a cleaned-out merch booth stand to reason that Insomnium are capable of making a success out of themselves in the good ‘ole U.S.-of A. All this, thanks to the strong promotional push of new label Century Media which has aided in the prolonged visibility of their 2011 Across the Dark album.

The interview setup with guitarist/clean vocalist Ville Friman was to be on the band’s bus, stationed outside of the Altar Bar in the Strip District area of Pittsburgh. For an international band, the Strip provides a unique cultural setting, as various street vendors peddled European foods, along with the visually-disturbing array of Pittsburgh Steeler gear, of which Blistering never fails to give the stink eye to. Fortunately, no member of the Insomnium team was decked out in Yinzer gear, or some serious trouble was to be had.

Our chat with Friman went off without a hitch (as you’ll read below), and was subsequently followed by the deal of the century in the form of a $5 Omnium Gatherum hoodie thanks to OG/Insomnium guitarist Markus Vanhala. Great bargains like this and Finnish hospitality are even more reason for the band to keep coming back…

Blistering.com: First things first, how is the tour going?

Ville Friman: It’s going really well. We’re in the middle way of the gigs, with three weeks to go. The shows have been really great and a lot of people seem to remember us, even after five years. People came to see us then and they’re coming back. We have very loyal fans and I think we have a lot of new fans as well.

Blistering.com: You were in 2007 with Katatonia, so how does this tour compare to that one?

Friman: Naturally, it’s a bigger audience. We had very good shows back in 2007 and we played a few big venues, but now, everything is bigger. We did that tour in a van and now we’re sharing a bus with Alestorm, so there’s a bit more quality, especially with the US venues, you don’t have backstage for all of the bands. It’s really nice when you have a bus so you can lay down.

Blistering.com: You have the “new guy” Markus out with you…

Friman: He’s very talented, obviously. He’s a great guitar player. We already knew him from when he was filling in for the other Ville [Vanni]. He’s a good guy and fits into the band. I think we have tightened up as a band because it takes some time. We had one European tour and one tour in U.K. and some shows in Asia, and this tour in America; we have a good time and it’s a lot of fun.

Blistering.com: In terms of the guitar parts, very rare is it when both guitar players are doing the same thing. You were always doing something, and the other Ville had something else to do. Is there a good division of parts now with Markus?

Friman: We have been dividing them up. With the songs, there’s not always one guitarist playing the leads; we mix it up. Markus has his own playing style so he had brought something to give him freedom with solos. He adds his own touch. It’s been a good transition; everything has been working fine!

Blistering.com: Being on Century Media is a step up for you guys, so how are you managing your personal life with the band? I remember a few members in the band were in school. Have you found the right balance that allows you to do the band when you can?

Friman: We can’t 100% fully commit to the band and tour 10 months out of the year like Alestorm. We take all of the vacation we can get from work, then we go on tour. Luckily we have the kind of jobs and our employers understand. They’re supportive and have a positive outlook toward this “hobby” or lifestyle we lead [laughs]. Century Media is better of course, and they do everything bigger than Candlelight. They also understand our situation, and we also didn’t want to rush the album…we wanted to make the best album possible. They were rushing us, but they also understand that there’s no reason to put out anything that’s not solid.

Blistering.com: Generally, Insomnium has been able to stay on the two-year schedule for its releases, but you went off it for One for Sorrow. Did the writing take longer for this one?

Friman: The writing didn’t take that much time; there were a lot of other things going on. We were constantly doing the band stuff, so it was good to have some time off. Basically, when we came back from the Dark Tranquillity tour in fall 2010, I practically started writing the album after that, so it was a four or five month period of composing the songs. It was a very intense period and I don’t remember much of it because I went to work, came back, and went back to work [on the album]. We’ll probably go to the studio next year, but we don’t want to rush it because we could get too tired. And if you get tired, you lose enthusiasm and you lose the whole point of the thing.

Blistering.com: So many bands get sucked into that 18-month cycle between putting an album out and touring.

Friman: It’s hard to find some middle ways. Not having two months gap of doing the album, but also having a social life and work [laughs].

Blistering.com: You’re handling clean vocals now and they’re very impressive. You’ve had guest vocalists in the past, so what brought upon you doing them?

Friman: We had been thinking about doing clean vocals for a long time, and I think now is the right time to try them out. Of course, we could have use Jules or other vocalists as well, but it’s not the same thing live. It gave me the confidence when we did the tour with Dark Tranquillity – I was doing live vocals then and they developed because I was singing all the time.

Blistering.com: A song like “Regain the Fire” instantly comes to mind. If you build off of that, you could go some places with clean vocals.

Friman: We like to keep some surprises in the mix so we don’t have all clean choruses all the time.

Blistering.com: I’m not going to name any bands, but you know when the clean chorus is coming.

Friman: Exactly. You need to have some surprise element in there and use it in different ways.

Blistering.com: Have you started thinking about the next album?

Friman: We have some ideas. It will be nice to have Markus involved because he’s such a good writer. Before, I’ve been doing a lot of stuff by myself, then working with Niilo [Sevanan, bass] on his songs. Now, it’s more collaboration. I think about the idea of coming up with a few riffs, then sending them over to somebody to work with. If you have one song ready, just demo it, but it would be interesting to have that cooperation. We have some things ready, but it will take a bit more time work on once we get back from the U.S.

Blistering.com: I remember very vividly picking up your debut In the Halls of Awaiting. Has it hit you that it’s ten years old?

Friman: It makes us feel kinda old [laughs]. With this tour, for once, we aren’t the youngest band. Basically, we end up touring with guys that are older than us. We have done quite a lot work-wise and everything, but time just flies. It was totally different times. The internet was the coming of things and you had CD’s and cassettes. You didn’t have the technology to have good demos at home…it wasn’t there. It wasn’t like the 90’s or anything. It was totally different; we were trading CD’s with other bands in Finland. We were young and everything was new.

Blistering.com: It had to be hard for you since you weren’t from Helsinki.

Friman: The scene is quite small, yes. It was more local. It wasn’t as serious, but we were dreaming what would come of this. Many things have come of this, like touring with our idol bands like Dark Tranquillity and Amorphis. We have seen a lot, but I think this ten-year period is where you learn what the band life is. You’re now repeating the cycle; you go to the different places you haven’t been before, like Asia. You’re repeating the cycle, but in different ways.

Blistering.com: Sentenced isn’t around anymore, but Amorphis is still going strong. Do you feel any responsibility toward carrying the torch once they hang it up?

Friman: I don’t know if it’s responsibility or pressure, but I think it’s nice people think that we are doing the same thing and in a way, we’re keeping the flame alive and that we are inspired by those bands. You can hear it in our sound and we’re taking it further. I got a really cool compliment from [Sentenced guitarist] Sami Loppaka – he sent an email a year ago saying, “Thank you for dedicating the song ‘Across the Dark’ to Miika [Tenkula].” It was a really nice compliment.