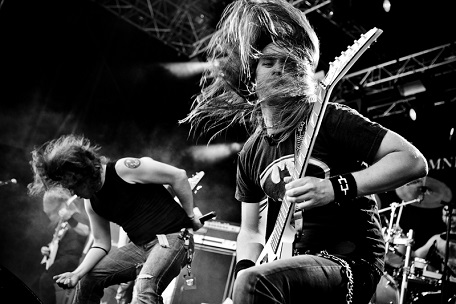 Towering Shadows
An uncharacteristic three-year wait between albums ensued for Omnium Gatherum between The Redshift, and its follow-up, New World Shadows. The band did its usual shuffling of the deck, hooking up with German-based Lifeforce Records for an early 2011 release. But it was the departure of long-time guitarist Harri Pikka that sent the biggest shockwaves through the band. Pikka was long considered to be alternative voice to Vanhala’s obvious affection for all-things melodic, resulting in the band’s patented dirty melodic death metal style, but as the demos for New World Shadows surfaced, it became evident the guitarist was no longer in the band’s plans.

Sums up Pelkonen: “The direction in the music that OG was heading and actually already was in made Harri to make the decision to leave the group. There was absolutely no bad blood with us and the choice was clearly for the fact that Harri was not so into this ‘new’ style in our composition.”

“Me and Harri did share pretty different kind of visions about the musical direction, as I’m more into melodic and progressive rock and metal stuff and Harri is more into stoner rock, et al,” says Vanhala. “With only me in charge for composing the music in this one, it wasn’t a surprise that I rocked the boat more to the melodically deep waters. Though, I loved playing with Harri and he is a special guy.”

With Pikka out of the picture, guitar duties fell solely onto Vanhala, who used this opportunity to explore the full breadth of OG’s melodic capabilities. “New World Shadows was true non-pressurized OG in its ultimate form! It was our ‘hit you with our best shot!’ magnum opus to show everyone what this band is about. Composing and rehearsing the album was magical moments, having a good time and rehearsing the stuff in the summer cabin in the forest beach in the middle of warmest Finnish summer with all the guys. Harri had left the band already, so it was only me responsible for the music and guitar playing, so I had open arms.”

New World Shadows opens with “Everfields,” a 10-minute epic that reigned in spacious melodies, a memorable vocal cadence from Pelkonen, and a shimmering atmosphere. Wrapped into one magnificent package, the song charted the course for what is arguably, the band’s finest hour. “Well, we had never put a long song to the beginning of the album and that reason actually played a big part when we decided what song would open NWS,” confirms Pelkonen. “Also it happened to be a kind of song that both composition-wise and lyrically really fit to be in the beginning.”

“Starting with the 10-minute epic and ending with the 10-minute epic, that was the main idea with NWS,” continues Vanhala. “What else do you need for the album? To be honest, when I first composed ‘Everfields’ I was sure it’s gonna be the epic ending song of the album, but after ‘Deep Cold’ came to life, then everything went upside down. As ‘Deep’ was [an] even more epic ender! Where can you go after that kind of song boasting? Nowhere. To the silence.”

In succession, the album reels off an anthemic melodic thrasher (“Ego”), a sing-a-long title track, the alluring “Soul Journeys,” as well as “Nova Flame,” which is a flavorful, catchy-as-can-be melodic death metal romp. “I started to focus more to the compact side of the songs than the progressive arrangements,” adds Vanhala. “Catchiness goodness. Always learning on and on from the crowd responses that what solutions work on 11 and what not.

Who can forget Swano’s guest vocal spot on the title track?

“We asked him if he could do some vocals on couple of the songs,” enthuses Pelkonen. “He was happy to do it and the result was truly amazing. There was no specific instructions for the vocals. I just composed the lines and we sent him some demo versions of the vocals and he did a great job!”

New World Shadows ended up being the band’s highest chart position in their Finnish homeland (#5), while grabbing several glowing reviews along the way. For the first time, public opinion on Omnium Gatherum was decidedly positive. Says Pelkonen: “It is always so nice to hear that people have enjoyed our creations. And of course it is nice to receive good reviews, too. I don’t care about criticism…of course I learn from it when it hits the point, but all the invalid comments, I really couldn’t care less. If people embrace our creations we of course, are ever so grateful.”

2013: Still formidable
In support of New World Shadows, the band notched well over 100 shows, as well as high-profile support slots for Eluveitie and Dark Tranquillity. As another first, the band spent more time on the road as opposed to the rehearsal room, thus giving Vanhala a much-needed break from the OG songwriting process. The band was also able to solve the second guitarist mystery by enlisting Malpractice axe-man Joonas “Jope” Koto. And so, the process for the band’s newest release, Beyond, began in early 2012 with Koto in tow.

“I’ve been already played with Jope almost 10 years in Malpractice, so he was easy decision to recruit to OG,” notes Vanhala. “I cannot say that he is a new guy because of our already long musical past together. Really a spirit raiser dude for the band again and lifted the things to a new level same way than Jukka did back in the day for OG!”

Beyond shows OG taking a step outside of their comfort zone, this time with even more melodically-inclined numbers such as the instant “Formidable,” gallant “The Unknowing,” and somber “Who Can Say?” The result is another that matches New World Shadows step-for-step, perhaps gaining its own identity as the album that could fit right in between The Redshift and New World Shadows. Vanhala said the band is at such a good point, that anything is possible.

“We try to think outside the box. Try to expand melodic death metal outside the trademarked safe template. It should be more about making music and making songs, not like making ‘melodic death metal’ or else. Of course we’re old enough band to know how the more fresh new territories can be put sound like OG stuff and not to be too different. We’re old enough to be our own influence, if you could say so”

The band’s recent run of Japan dates proved they could thrive outside of Scandinavia, but the question remains for us Yankees: Will the band be able to hit North America in support of Beyond?

“There’s finally some real talk about this and we’re working on it,” says Vanhala. “So let’s cross our fingers that we can rock the boat also in the North American soil soon. The Japan tour this year was the first tour ever outside Europe for OG, so we’re on the move now. When I was touring with Insomnium in US last year, I saw that there’s a big amount of OG fans already waiting for us and every night some people came to talk to me about OG and had CDs for signing, etc. I was happily surprised about this!”

Seventeen years into their existence, and with six albums under the belts, the Omnium Gatherum has seemingly, just begun. And for a band that has made marked progress from album-to-album, there’s no telling what’s next. Pelkonen and Vanhala are in agreement:

“Anywhere and everywhere,” finishes Pelkonen. “No limitations Beyond.”

“Anytime, anywhere,” adds Vanhala. “That’s for sure that somewhere we’re going and having many years still to come!”