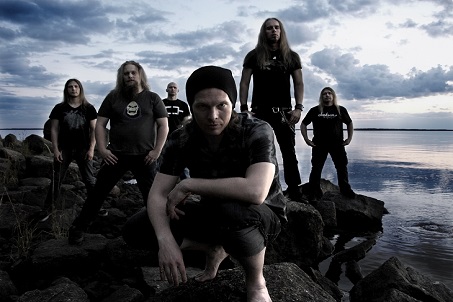 The Latin translation of Omnium Gatherum is “grouping of all things.” If that definition doesn’t encompass at least a good hundred (and counting) metal bands, then what doesn’t? The name takes on a very literal interpretation now, but in the mid-90’s, no one could have foreseen the oncoming melting pot and hodgepodge modus operandi of the underground metal scene. The choices were simply too scarce. Subgenre alterations had just started to take place, though, with the likes of Carcass and Death leading the charge, two bands willing to stray from the standard death metal template into more song-friendly and melodic territories. Therefore, it’s no surprise that the two were the primary influence upon the formation of Finland’s Omnium Gatherum.

Since their 1996 creation in Karhula, Finland, the band has risen from pre-cult status to the cusp of melodic death metal dominance. It has been a run that has tested patience, broken up record labels, and left many a good Finnish musician in its wake. The Finnish metal scene may be big, but its country is small and opportunities are limited, creating a Darwinian mode where truly, only the strong survive. Thus, OG’s career arc can be defined by the term “survival,” for lesser bands would have packed it in given the bouts of adversity thrust the group’s way.

Headed up by their classic, 2003’s Spirits and August Light, Ominum Gatherum’s fresh and original take on melodic death metal is what has enabled them to remain viable in 2013. Riffs defy categorization, while retaining a homegrown, hummable quality. Banzai vocals, melded with personal, forward-thinking lyrics serve as the true death metal rallying cry, all while the crisp, atmospheric melodies are permanently hung above the horizon. They’re forever the answer to Finland’s penchant for melodic metal leanings, the upper-tier in intelligent songwriting and composition. Just reference the unbeatable four album run they’re presently on, starting with 2007’s Stuck Here on Snake’s Way to this year’s fresh Beyond.

There’s quite the back story to Omnium Gatherum’s career, one that has yet to have the benefit of being told. Therefore, it is with total enthusiasm and reverence, we are telling the Omnium Gatherum story in a no-holds-barred fashion. Joining in on the fun is guitarist/founding member Markus Vanhala, original bassist Janne Markkonen, drummer Jarmo Piika, and former vocalist Antti Filppu. Onward we go…

Lighting the torch
After the pre-OG Moonshine fizzled out after one gig, Markus Vanhala set his sights on forming a new band, one that would blend the upward, progressive nature of Death, with the melodic caress of Finnish heroes Amorphis and Sentenced. Given the band’s not-so-near Helsinki locale, finding like-minded souls came down simply to a matter of musical preference and some musical ability. And lo and behold, the first lineup of Omnium Gatherum was born in 1996.

“The first incarnation of Omnium Gatherum [was] with [vocalist] Olli Lappalainen, whom I met at the local music school where I was studying guitar playing and same story here, we just found out that we both love the awesome band called Death,” begins Vanhala. “Olli is the guy who is still doing all the artwork for OG albums. Harri [Pikka, guitars] and Jarmo [Pikka, drums] played together in tech death metal band called Urolagnia. Me and Janne [Markkanen, bass] then played in black metal band Manala, so somehow we got to unite these forces to one unit known as OG.”

Four demos (Forbidden Decay, Omnium Gatherum, Gardens, Temples…This Hell, and Wastrel) would emerge from the camp over the course of the late 90’s and early 2000’s. Lappalainen would eventually give way to singer Antti Filppu, whose maniacal delivery gave OG the polarity needed to establish their sound. Largely defined by Vanhala’s persuasive and edgy melodic guitar work and adventurous song structures, OG’s songcraft was a different side of the coin to the then-rash of Children of Bodom and Amorphis soundalikes. In fact, it mirrored the progressive course that Death was on, post-Spiritual Healing. The band would eventually strike paydirt once the Wastrel demo fell into the hands of fledgling U.K. label Rage of Achilles.

“I sent huge pile of demos to the companies the old way in a mail, and Rage of Achilles was the first one to reply and offer a deal,” enthuses the guitarist. “And of course, we sold our souls right away ‘cause it was the coolest thing in the world. After we signed the deal we got more, also better offers, so we kind of a rushed the thing but when you’re young and restless you don’t wait even one extra day to sign and do your debut album!”

The 2002 Steal the Light EP marked the first official Omnium Gatherum album. Led by “Wastrel,” and “Son’s Toughts,” the boost provided by Sonic Pump studios gave OG a professional sound, one that instantly attracted the overflowing melodic death metal horde. Recording the EP, though, proved to be a tougher task than the band initially thought. “The sessions were started in December 2001 after we signed the deal with ROA,” notes Markkanen. “Still, we didn’t have enough money from the label to cover really all the studio expenses and I remember that we all put some little money for the recording sessions.” Vanhala shares the same sentiment, albeit a little more rosy: “We went then first time to a REAL studio to Helsinki and everything was new and we lived the rock ’n’ roll dream, ha-ha. Sleeping on the floor and having the feeling that ‘This is it now,’ ‘We’re living it,’ ‘We’re delivering the goods!”

According to Filppu, the story behind some of the songs on Steal the Light aren’t what one would think, especially coming from a Finnish metal band.

“Steal the Light also reminds us of the old Finnish joke about fools who forgot to build windows to their house, and so they carry the light in and the darkness out with their empty sacks. As for the band, I took them to a gay bar called ‘Lost & Found,’ and they were so terrified that they forced me to change the name of the song to ‘Lost and Found,’ so that it would not be mistaken for the gay bar. But it did, anyway. And that’s the way it was written.”

A nine-month wait from the EP’s conclusion to its actual release proved to be a bone of contention for the band, but reception was universally positive. The ever-picky (and terribly trendy) Kerrang! nominated OG as one of its “21 Bands to Watch Out For,” while Metal Hammer claimed “If Opeth is Pink Floyd of death metal, then OG is at least turning to Rush of the genre.”

“The reception was mainly positive,” says Filppu. “It could have been even more so, if the band’s unique style had been recognized more widely, and I mean the overall style and outlook of OG at that time. It was a very unique thing, to have so omnium kind of gathering.”

August and everything after
Late 2002 saw the Finns hunker down once again in Sonic Pump Studios for the recording of their debut full-length, entitled Spirits and August Light. Already familiar with their surroundings, the recording proved to be more manageable for the young Finns. “Again, we had just a little amount of money from the label to record an album and time to put it all together in the studio,” notes Pikka. “I think we had only about less than two weeks to record and mix the whole thing. However, the final result was very satisfying for us. The debut got much praise in the media and reviews were top-notch.”

“We really were a tight unit with the band and rehearsed much and partied much together and hanged around together,” adds Vanhala. “On the studio sessions we did everything really fast, as we didn’t have about time at all for recordings due to small budget. All the recordings were made at four days, in fact. So there were some pressures but we had a good time and the band was on fire, as we had rehearsed really much playing good takes wasn’t a problemo after all.”

Recorded and engineered by Nino Laurenne [who would go on to work with the likes of Ensiferum and Sonata Arctica], the sound on Spirits can arguably be described as too raw and ragged for a melodic death metal album, especially one with such crystalline and graceful numbers like “The Perfumed Garden” and “Amor Tonight.” However, the album’s grit and character was perhaps an indirect response to the overly-clean sounds emanating from Studio Fredman. It instantly gave OG a sonic identity, one that worked in concert with the superfluous melodies and labyrinthine arrangements.

“The album is sounding really weird and chaotic, but I think it’s only a good thing and gives individuality to the album,” states Vanhala. “Nothing else really sounds like that album, in good and in bad. But there’s really a spirit and soul in that chaos! But after all the press-response was overwhelming and we were really surprised on getting all those high rates and praising feedback! Too bad we were young and naive and didn’t understand to redeem all this and do lots of touring and pushing ourselves and so didn’t the label either.”

Unbeknownst to the band, Rage of Achilles was embroiled in a slew of financial issues. With work already in progress for the band’s sophomore Years in Waste, news came flowing in from the label’s U.K. headquarters that the label was unable to make payments on any of its artists. “ROA was signing a lot of new bands at the time we were Spirits,” says Pikka. “I think that was one reason that resources were not that good for all the bands at the same time. For a small label like ROA, it is difficult to handle all the expenses coming from every direction. Things did go further and ROA was on the edge of bankruptcy and we were forced to move on to seek other possibilities.”

“We were already in the studio recording Years In Waste, this time agreed with big budget from the label and we were recording that album over one month,” adds Vanhala. “Then we just got few emails from the label that they don’t have any money to pay our big bills and this was it. So during recordings we had to stress out about finding someone to finance our big art bill and we started to send the raw-mixed stuff to labels. Gladly there were some good interest from the good labels, and of course we decided to go ahead with the biggest one, Nuclear Blast!”