Inferi – The Beginning of a New Era 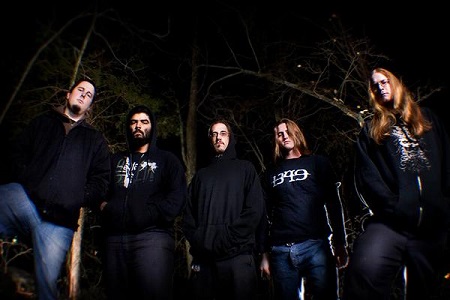 When underrated melodic death metal bands come up, Inferi is usually one of the first mentioned in this writer’s mind, due to the two fantastic releases the band had in the late 2000s.  After The End of An Era, the band took a brief pause to regroup and reform, and finally delivering their third offering, The Path of Apotheosis, here in 2014.  A frenetic display of technically dazzling yet memorable death metal, it seems that with any luck, underrated may not be a word necessary to describe the band much longer.

A man of many bands (Inferi, A Loathing Requiem, Diskreet), guitarist and founding member Malcolm Pugh was kind enough to answer a few burning questions that DR had about what had happened to the band through their “dormant” years, fans’ rabid enthusiasm for the band, and of The Path of Apotheosis itself.

Dead Rhetoric: Going back in time a bit, was The End of An Era titled with the notion that it would be the final album for the band?

Malcolm Pugh: The album was originally going to be named after the opening track “The Ruin of Mankind,” but we decided to change it once we knew the future; the band was going to be put on hold for an undetermined amount of time.

Dead Rhetoric: What caused the initial break-up of the band following The End of An Era?

Pugh: In 2008, we were contacted by a certain record label that was on the rise at the time, but I’d prefer to keep their name out of this for personal reasons. Anyway, at first things were looking good, but once we signed the contract with them, things changed for the worst. The label wanted us to change our name and band image to fit their own marketing agenda. We obviously did not abide to their needs, so they ended up dropping us from the label without releasing the album.

Around this time I started playing for Diskreet, based out of Topeka, Kansas. I felt it was time to move forward with other projects, which lead to Inferi’s temporary disbandment.

Dead Rhetoric: How did the pieces come back together to resurrect Inferi shortly thereafter?

Pugh: I personally felt that the first two Inferi albums did not hold up to my original vision as to what the band could truly offer. I had just moved back to Nashville to join Enfold Darkness and it just felt like something that I needed to do since I was back home.

Some of the previous members had moved on to other projects, so I took that opportunity to recruit some of the best musicians in the area. Mike was the first guy that I approached about it and I knew I wanted him to be apart of Inferi’s rebirth. He was a former member of Enfold and we knew each other for years, so it just made sense. At the time Jack Blackburn and I were both playing with Enfold Darkness. Jack had filled in on the drums for us a few times in the past, so I knew he would be a fantastic addition. We were all great friends that had worked with each other at some point, which only made things easier.

Dead Rhetoric: There seems to be a pretty large number of people that were hungry for more Inferi.  Were you surprised at the level of enthusiasm people had for the band?

Pugh: I was absolutely amazed at the amount of people that were in full support of Inferi. I am still in a state of shock.

Dead Rhetoric: You started demo-ing some of the songs that became part The Path of Apotheosis back in 2011.  How do you feel the songs have changed since then?

Pugh: The songs themselves have not changed much from the demos. The album versions were just slightly upgraded and sound more intense and refined. I actually wrote some of the riffs for the song “The Promethean Kings” back in 2008, in hopes for it to make it on The End of an Era. Unfortunately, we didn’t have the time and the song was nowhere near complete, so I think that song in particular helps weave in the older sound with the new style.

Dead Rhetoric: How do you manage to walk that fine line in your songs between keeping things technically interesting and making sure the song is memorable?

Pugh: Melody is essential. Without melody, most people will just hear fast brutal metal. So, I try to base my riffs around a melodic feel and sometimes the complexity just pours itself in with it, because each and every note in our songs are just as important to me as each and every lyric, drum beat, etc. When Mike and I are going through riffs and song ideas and one of them doesn’t get stuck in our head or give us goose bumps, then we know it’s time to scrap it or set it aside until it fulfills that need.

Dead Rhetoric: I had to look up the term “apotheosis” (meaning: the highest point in development; culmination or climax).  Is there any significance of that definition for the album?

Pugh: Absolutely! I think this album exercises our musical capabilities at full blast and crushes everything we have done in the past. Considering this is the first album with the new line-up, I can only hope that we will continue to grow as musicians and continue to out do ourselves as a band.

Dead Rhetoric: Could you give a bit of story based on the cover art for The Path of Apotheosis?

Pugh: The cover represents the “Promethean Kings” at war with each other. This is actually a concept album based the creation of the human race and their creators. Since the songs on this album tell a complete story, I thought the cover needed to be apart of that story as well.

Dead Rhetoric: The Path of Apotheosis sits at about 65 minutes in length.  For some bands, that could have meant the kiss of death.  Did you have any second thoughts about possibly cutting down the number of songs at any point?

Pugh: I never really thought about cutting down on the amount of songs, it was actually the opposite. I wanted this album to be at least an hour long. With 5 years between record releases, I thought it was the only way to satisfy our fans’ desires. Our songs also tend to be longer than most bands, but I honestly do not see that as a bad thing. I think it helps us, because we play very melodic parts that need time to build themselves musically.

Dead Rhetoric: Is there a song or two that you are particularly proud of on the album?

Pugh: I am proud of them all, but “Destroyer” and “The Ancients of Shattered Thrones” are a couple of songs that Mike and I wrote together, so I think they stand out a lot more to me because of that. Mike is a phenomenal songwriter and he has been a huge part in helping the band grow.

Dead Rhetoric: There has been a bit of a jump in the number of metal bands emerging from the South.  Was it difficult back when Inferi was starting to get the word out about the band?

Pugh: I think don’t so. Before Inferi was an actual band most of the members were in bands that played around a lot and made a name for themselves already. I think Inferi was just caught in the middle of that attention and we just rolled with it.

Dead Rhetoric: Do you feel it’s easier to get the word out about Inferi at this point?

Pugh: No, not at all. Even though we have somewhat of a “cult following” I feel as if we are starting with a clean slate and still have a lot of work to do in order to spread the word about our music.

Dead Rhetoric: Most of Inferi are involved in other bands as well (A Loathing Requiem, Oubliette, Vital Remains, etc).  Are there any plans for Inferi to play some shows or will it be more of a studio band?