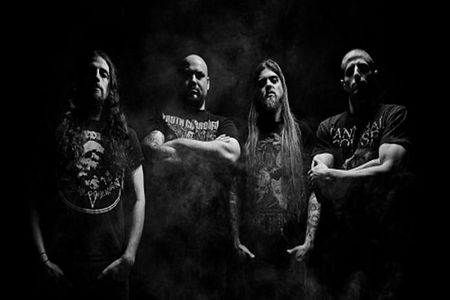 Dead Rhetoric: Hailing from Australia, how much of an impact did bands like Alchemist, Hobbs’ Angel Of Death and Mortal Sin have on your viewpoint of metal and the possibilities of gaining more an international following?

Farrugia: That’s a really good question. It’s huge, they are bands that have proved that it’s possible to be noticed so far away from the rest of the world. Growing up in metal at 16-17, at festivals like Metal for the Brain those bands are celebrated, they are heroes. A lot of those bands were well established by the time I was getting into the scene, but you would make the effort to go and see these acts because they were world class bands that grew up and still continue to play here. We are seeing more and more bands doing this- the internet is helping to reach more people.

Dead Rhetoric: Because another Australian band Harlott was responsible for getting your band to the attention of your new record label Punishment 18 Records, correct?

Farrugia: Yes, that’s true. Andrew Hudson, who is the guitarist from Harlott- they are an incredible band who just got back from touring Europe and who are now on Metal Blade, I caught up with them over the weekend as they played this same thrash festival in Adelaide that we did. It was really good to hear all the stories of their tour with Annihilator and how it is in Europe. He first put me into contact with the label so I owe him quite a bit of gratitude for hooking us up in the first place and getting that relationship going. It’s the first time we’ve released an album on a label willing to promote it.

Dead Rhetoric: What’s your stance on old thrash versus new breed of bands? And I understand that one of your favorite albums of all time is Testament’s The Gathering – what makes this record the ultimate for you?

Farrugia: The Gathering was the album that I learned to sing to. Chuck Billy’s voice on that album is the ultimate. There’s something about the way that whole package comes together. The huge but ugliness of the production, the viciousness of the songs, that album has everything that a good heavy metal album should have. The only thing I would have liked more would have been a few more faster songs, because my favorites are “Legions of the Dead”, “Fall of Sipledome”, and “D.N.R. (Do Not Resusitate)” – it’s also not just throwaway riffs, things just build and build. Nothing falls flat, it all comes together to be this huge, evil, dark sounding thing. I feel like that album amongst all their albums stands out. For me it’s one of their albums I heard in my early metal listening years and I forgot how destructive it really is. I get a lot of Chuck Billy vocal ripoff comparisons in my vocals, we have a bit of fun with it.

There are some thrash examples that are incredible, but there are a lot of bands that have put out albums that are fairly generic or faceless. One of the newer breed that I love is Vektor, that band is really forging their own identity. They have incredibly technical riffs but they are writing these amazing songs. The vocalist is doing his own thing. For some of the newer thrash bands, this is kind of missing. It’s fantastic that we’ve had a resurgence in the genre, and it’s benefitted us really well. It’s important that the new bands forge their own identity.

Dead Rhetoric: How do you view the current heavy metal marketplace? What improvements or changes do you think need to occur to ensure its longevity?

Farrugia: A really good question- and I am not an expert. I hear stories of how the way things used to be and how CD sales used to sustain bands, that’s not the case anymore. We make a fair bit of money off of merchandise when we are playing out and about, and a lot of that comes from CD sales. If bands are willing to put more of an effort into the packaging, the cover art, people will go out and buy it. I try to base things on what I would do- try to use that as an example. I am quite a prolific downloader, if there’s anything I’m interested in but I make an effort to buy everything in physical form. I’m a bit of a metal nerd and I have a large collection of albums. I don’t feel like I own an album until I’ve bought and paid for it. People really need to buy things, but I don’t know what to do to increase CD sales. There’s a lot of time, effort, and money that goes into creating this music, it’s not a throwaway commodity. The internet has this great thing because it’s easy to get your music out there, but it’s so cheapened what albums are and what people think they are worth.

Dead Rhetoric: Can you tell the readers a little about the Australian Rock & Metal Institute you visited recently- that must be so cool to have a school devoted to both genres?

Farrugia: Yeah, that’s really exciting. To be honest I was completely ignorant of this until our weekend away. I thought A.R.M.I. was a promotional group that just put on shows, there is a guy Christian there who opened the place with his wife. It’s in the heart of Adelaide city, and it’s a music school where they specialize in rock and metal. They have a whole group of teachers who play in rock and metal bands, and they run classes. Kids can come in and they work on theory and practice that they’ll be able to apply. They have a small back room where they do small shows and performances – King Parrot played there. I can imagine it will do really good things for our metal community.

Dead Rhetoric: Having your brother as a drummer in the band, what positives and negatives develop as a result of consistently being around each other and knowing that you are family?

Farrugia: A lot of brothers fight and have a lot of tension, but Mark and I always had this thing where we always got along really well- inside of the band as well as outside of it. Growing up playing together when I play with another drummer I really feel the difference. Mark seems to know what I am thinking, we grew up listening to the same music, in general we listened to the same CD’s. I love having my brother in the band, he’s an incredible songwriter. He’s got a lot of faith in my management of the band, he’ll have a lot of creative input but he leaves the management side to me. He’s hugely dedicated, he’s by far the best musician in the band. Mark will spend two to three nights alone outside of his work in the band working on his drums, that’s how he’s made a huge jump in his playing especially over the last couple of years. I can’t imagine playing with anyone else.

Dead Rhetoric: Considering the recent events regarding terrorism in Paris at live rock shows, have you ever faced any dangerous situations for In Malice’s Wake either in terms of safety or poor weather conditions?

Farrugia: No, not at all. I don’t know if we are sheltered here a little bit, but it’s always been pretty safe. The worst we have to face is drunks on stage throwing down mic stands into my teeth. Other than that we’ve been quite lucky. The Paris incident was a really big shock to hear about down here in the media because there is a lot of tragedy in the world every day and what is shocking is the violence that we know exists out there coming into an arena that we are all comfortable with… there is no way I could imagine a terrorist attack at a show here in Australia. That was a big part of why the world was so shocked.

Dead Rhetoric: What hopefully lies on the horizon over the next 12 months for In Malice’s Wake beyond domestic touring? Any video possibilities or foreign festival/ tour action?

Farrugia: We’ve had a fairly quiet year as far as shows because we wanted to concentrate on the new record. Next year will be a different story (as) we are going to focus especially on getting out on the road. A lot of shows here in Australia but I am working on a lot of opportunities to get out beyond that. I have talked to a few festival promoters, one in Asia and a few in Europe and we will see what we can do. We would love to do a tour of Europe, it’s just a matter of finding the right one and also having the time to do it. Mark just had a daughter so he is quite busy with family at the moment. We want to take this beyond Australia, fingers crossed something will come together. We will do a video, we are filming some live footage at a show coming up and it will be for a song off the new album called “From Beyond”. We will combine it with some footage over January, a video is definitely in the works. 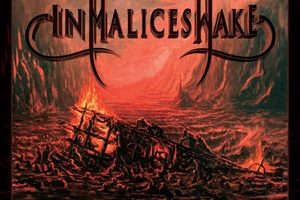 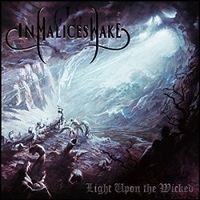