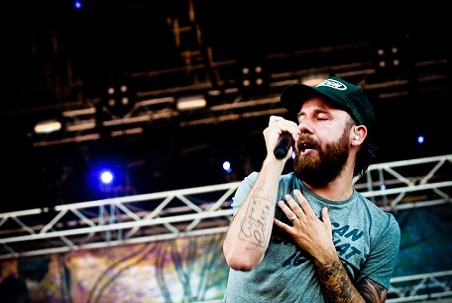 Blistering.com: To that point, compare the Anders today of say, 1996 around The Jester Race.

Friden: I’ve become better [laughs]. I think I don’t pretend or I’m not trying to aim to sound like someone else in the beginning. You want to become your heroes; you don’t find your own sound. Today we’re more influenced by ourselves or what’s around us. In the early days, it was like, “You have to do this. You have to sound like this. You have to be part of the scene.” Even though that’s what we wanted, we were a little more unsure of our place in the world. It’s a part of growing up. I’m super-proud of those albums and they are fucking amazing for what they are. I’d never be here without them. But The Jester Race Part II will never happen and if we tried, it would sound terrible.

Blistering.com: You know, it is the 15th year anniversary of The Jester Race and the big trend is for bands to perform one of their classic albums in its entirety. Has any thought been given to that, even though you have a new album coming out?

Friden: It’s not likely and if you know In Flames, we try not to do the most typical things. I see a lot of bands doing a whole album from their career where people said they were at their best…I can’t see us doing that. It would be impossible to make those albums again. I keep on saying that Operation: Mindcrime is one of the best metal albums I’ve ever heard.

Blistering.com: Then they did Mindcrime Part II.

Blistering.com: Ever since Colony and Clayman, your popularity has increased dramatically, which means expectations for each album are extremely high. How do you deal with that? Do you pay attention to it?

Friden: I read reviews, I read what fans say, and I have interest in what people think of us. It doesn’t bother me when someone says, “You suck.” I sleep well anyway [laughs]. If people like a song or a whole album…we haven’t gone from a sudden hit to world famous. It’s been very slow to get where we are today and I think the whole band has their feet on the ground. We try to be as normal and have a relaxed attitude, even though we take our music seriously. We are here on our own terms which we made. Not because of the record company or fans, or anyone else. It’s always been the five of us and if we haven’t agreed on something, we tried to agree on it. I’m so humbled and thankful to all the people that listen to us, to be here and do what we love.

Blistering.com: Was there any particular moment around Colony orClayman that you realized you were in it for the long-haul?

Friden: Well, things started to happen for us a little bit more, but I didn’t think we’d still be doing it in 2011. I made a decision around ’97 when we started to tour a little more and I wanted to become an architect and I was like, “Fuck it, I can do it later if this music doesn’t work for me.” I had the hopes of doing it and we’re still going, so I think I made the right decision.

Friden: I really wish I had more time to devote myself to it, but it’s just impossible right now.

Blistering.com: You’ve always been well-received in North America, so what are your expectations for this summer when you do the Rockstar Energy Drink festival?

Friden: Fucking sweaty and lots of barbecues [laughs]. I’m looking forward to it. It’s a little bit different to do tours like this because we have only 30 minutes and we have 10 albums to choose from. It’s hard to cram all the songs we want to play and all the songs the fans want to hear into one set. We just started touring in Europe, doing a few festivals and I’m happy to be out there again.

Blistering.com: With this tour and having 30 minutes, it has to be hard to choose.

Friden: Definitely. We’ll be getting a lot of “Why didn’t you play this? Why can’t you play that?” I’ve been hearing the “Why?” questions since ’95 [laughs]. I’m used to it; it’s hard to be loved by everyone [laughs].

Blistering.com: Is it harder to interact with crowds during these big amphitheater shows?

Friden: I love big stages as well if the crowd is moving, but if you go there and the crowd is sitting around, drinking beer and waiting for the next band, it makes you work even harder. We have put ourselves in this situation and if we can make some people move, then we’ve succeeded. We’ll just go out there and do our jobs. No complaining.

Blistering.com: What’s the setlist looking like for the Euro festivals?

Friden: We have been doing just a lot of the “hit” songs now, but I’m working on a setlist for when we go out on our own, with some stuff we’ve never played before from the early days. We have to re-work some because we weren’t thinking about playing some of these songs live.

Blistering.com: What’s the gameplan for the next two years or so?

Friden: Touring, touring, touring. We’ll be everywhere, including Japan, which we’ll have to see because they had the accident. Hopefully Australia, too. We have things to do [laughs].