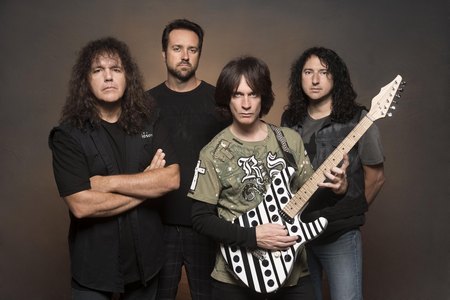 The power of the axe holds court in the halls of heavy metal. There’s just something magical about striking the right chord through a tremendous amplifier or listening to a blistering lead break that connects musicians to their audience. During the 1970’s, Chris Impellitteri caught this bug and began his love affair with hard rock and heavy metal – which would lead him into the realm of AC/DC cover bands, Vice, and eventually starting his own band namesake Impellitteri as a teenager.

Gaining prominence for his neo-classical, shredding lead technique put him in a similar stature as Yngwie Malmsteen, but there is more to Impellitteri than that aspect. The man can write a lot of memorable riffs, catchy hooks, and tight arrangements – often in compact, 3-4 minute time frames. And Impellitteri also has a killer lineup through the years – currently including vocalist Rob Rock, bassist James Amelio Pulli, and drummer Jon Dette.

After numerous spins of the band’s tenth studio album Venom, it seemed more than appropriate to catch up with Chris from his West Coast home base regarding a whole host of topics. The man lived through heavy metal’s heydays and its major media collapse, and still stands strong while others have fallen by the wayside. Learn about perseverance, tenacity, anime, white boots, life as an orphan, and the music business from a true gentlemen of the scene. The floor is yours Mr. Impellitteri…

Dead Rhetoric: Venom is the latest album – how did the songwriting and recording go for this in comparison to 2009’s Wicked Maiden and have you changed things around a bit in comparison to the 80’s and 90’s recording techniques for Impellitteri?

Chris Impellitteri: Wow, good question, quite in depth! Yes, first of all, in preparation for this record we had four years to write this. I was doing a side project, the Animetal USA thing with Rudy Sarzo, so while I was busy with that I had a lot of down time in between, 3-4 months here and there. I wanted to write a record that would allow the band to grow musically speaking. I was spending a lot of time listening to various classical music records believe it or not, a lot of Vivaldi with The Four Seasons, things like that. Just to listen to composition and structure – which was different because Wicked Maiden was definitely a more aggressive rock/metal record. And not to say that Venom isn’t – because I believe that’s even more aggressive than the last album. I started around mid-2010 with the writing – I think the first song I wrote was “Empire of Lies”. We wanted to challenge ourselves to see if we could write and perform on a record, a record that would be as equally as good as some of my favorite records like Van Halen, Blizzard of Ozz, Master of Puppets – and this is not meant to be arrogant in any way or form. Coupling the classical influence, studying the composers in that realm, plus challenging ourselves to see if we could develop a record that would stand up to our favorites that we knew as kids, that’s a process we followed for three years. I can’t even tell you the amount of songs that we wrote that didn’t make the record- only the 10 or 12 best is what we kept. Once the writing was done, then it was about rehearsing and really getting this band to sound like a live band- we didn’t want to have it sound like we were sharing files and using Pro Tools.

I did a lot of demos by myself for Wicked Maiden without the band, so that was more initiated from myself, listening to a lot of rock music as a guide. Venom is more of me reaching into myself as a musician, I wanted to show my maturity and have a more aggressive record and tap into the best composers in music history. Mozart, Beethoven, Vivadi. We went to NRG Studios in Los Angeles, we rented the biggest studio we could so we rehearsed all these songs. It was a different experience for 2015, because most bands do not use this method anymore. Most of the record you are hearing is us performing live.

Dead Rhetoric: You often compose hundreds of tracks to whittle things down to the final cut. How do you know what separates the acceptable from the outstanding in Impellitteri material – as standouts to me include “We Own the Night”, “Time Machine”, and of course the title cut?

Impellitteri: I am so happy you said those tracks as we are shooting videos this coming Thursday and we have been asking everybody about their favorite songs, but without a bias. We are doing five videos, and “We Own the Night” plus “Venom” made it. As far as whittling it down, I don’t know if we ever truly know what is the best song and what is the worst song – because we are really close to the music. I’ll write a riff and I’ll really dig it, and maybe 2 years later I’ll go ‘this sucks, what was I thinking?’. It was more about me playing the riffs for the band guys, and if they smiled or said it was great, then it would be developed further. By the time we did that we had a sense of the best songs. Once we record the original demos you get the time to get away from it- and having 4 years of down time we could listen to the songs with fresh ears.

Dead Rhetoric: How did Jon Dette integrate as the new drummer? He is one of the hardest hitting guys I know, after seeing him on tour with Heathen a few years back…

Impellitteri: (Laughs) I’m so glad you noticed that, and it’s so true. When I was doing Animetal USA, I brought him into the band. My Marshalls (amplifiers) are always obnoxiously loud, and he hits so hard that some of his cymbal hits are a guitarist’s worst nightmare because they get in my frequency. Our old drummer Glen Sobel who is now playing with Alice Cooper, I love him, great friend, and he’s done some tremendous work on many of the Impellitteri records and tours. But Jon, he had this tremendous energy coming into the Impellitteri band. When I was writing a lot of the music, we had brought Jon in for Scott Travis when we did the first Animetal USA record. He made the band, and when we completed the tour I went right into writing mode for Impellitteri. Well Jon got called to fill in on the Anthrax tour, Charlie (Benante) couldn’t make all the gigs. At the same time I was doing some festivals in Europe, Slayer called him because they had a falling out with Dave Lombardo and they asked him if he could do both gigs. So Jon was doing festivals, playing an Anthrax set, taking a 20 minute break and then doing an hour and a half with Slayer. When he was finished with that he was in great shape so I brought him in and we were going to do stadium festivals in Korea. We rehearsed as a band, he was giving us a breath of fresh air. He made us feel like we were 15 again, it was great.

Dead Rhetoric: In your formative years Uli Jon Roth and Eddie Van Halen had a major impact- please tell us what captivated you about these two guitarists, and has your philosophy regarding technique, arranging, and feel changed as you’ve performed this many decades in?

Impellitteri: I still love those guitar players. In all sincerity if I’m being honest – personally any guitarist who has ever played, ever recorded a record, ever played out or that I’ve seen, has probably had a positive influence in some way. Whether you are a shred guy like Al Dimeola, Yngwie, Steve Vai, or Paul Gilbert – I guarantee I’ve watched you, studied you, tried to take things in and incorporate it someway for my own. And Uli- he was such an influence because he was doing the harmonic minor scales, the diminished things, long before anybody. Listen to his work on Virgin Killer – I was probably 7 years old and he was doing that shred stuff. At first when I heard Yngwie- I still love him too- I thought he was a copy of Uli. You know the white Stratocaster Yngwie plays? Uli had that in 1975, cream color, maple body, wearing the white boots – the same thing. Uli’s composition was amazing. About 5 years ago Uli was doing a show at UCLA Theater and invited me on stage to do “Virgin Killer” along with Francis (Buchholz) the old Scorpions bass player. That was a blast.

Eddie Van Halen was my biggest inspiration as a child. He was the one that made me want to be a solo guitar player. Even though back then it wasn’t called shredding. Eddie’s influence – he affected me based on his work on the first 3-4 Van Halen records. Things like the solos in “Ice Cream Man” or “I’m the One”- that’s the stuff that really got me as well as the bootleg stuff pre-first album, he was doing a lot more shredding before he was even recording on the Van Halen albums. Plus the purity of his tone.

Dead Rhetoric: How do you handle the fact that the style of neo-classical oriented melodic heavy metal you play is more popular in other parts of the world where it struggles to sustain any sort of healthy following in the United States where you are from?

Impellitteri: It is interesting. In Japan the band is huge and I don’t know why. I mean there are so many other great bands as well but for some reason we’ve been able to reach a level that (only) bands like Metallica and Bon Jovi attain, bands like that have that success in those markets. Parts of Japan and Europe, the education system is different. They are classically trained, and you’ll hear a lot more classical radio stations than you will in the United States. I am considered one of these technical shred guitarists, whether you like me or you hate me, it is because I’ve matured and advanced based on music theory. I think they gravitate and like that because it’s part of what they’ve grown up with. Whereas in the US, we grew up with Elvis, the Beatles, Jimi Hendrix, then we grew up with Van Halen, Aerosmith, Metallica – which may be considered a little bit more crude then say listening to Uli Jon Roth, Yes, progressive bands.

Dead Rhetoric: What is it like to have such incredible voices such as Graham Bonnet and Rob Rock singing over your compositions? Do you have any special stories through the years regarding their work ethic or musical philosophy?

Impellitteri: First of all, they are both great singers. I love Graham Bonnet’s voice. Graham as a child I knew about in Rainbow, I used to hear him sing the Michael Schenker Group material. I thought what he did in Alcatrazz with Yngwie and Steve Vai was great. Really good stuff. He’s a unique singer- he doesn’t sound like anyone. He is by far the loudest and most powerful singer I’ve ever worked with. Picture what Pavarotti and those tenor operatic singers sound like – he’s got one of those voices. And Rob Rock – the same thing, not as powerful as Graham but he’s got tremendous range. Great vibrato and great soul. 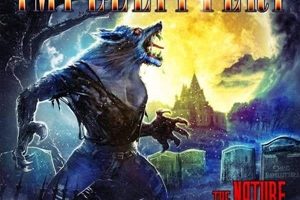