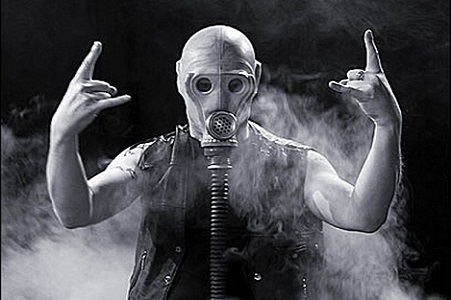 Dead Rhetoric: Speaking of the album artwork, you had [former Sentenced bassist/vocalist] Taneli Jarva do it, and there’s a history between the two of you. How did this come about?

Luttinen: Basically I was not in touch with Taneli anymore, but then a couple of years ago, he phones me and says, “Let’s go out and raise hell!” I was like, “Sure, why not?” [laughs] Taneli is now a tattoo artist in Finland and very well-known. I started thinking it would be an interesting idea for him to do the cover and I phoned him and asked, “What do you think?” He said, “Sure, I’m not going to draw anything – I’m going to do a painting. I’ve never done a painting on a canvas.” The only thing I did was send him the lyrics for “The Flaming Sword of Satan.” I got a text message back immediately: “Fucking great lyrics. I have inspiration already.” Three weeks later, he sent me a picture of the painting and I was like, “Wow, this is really different.” It was totally something I wasn’t expecting. It’s really old-school, and the great thing is that it’s been dividing opinions. Some people have said, “This is so stupid with the skeletons and hard-ons. They are complaining about these kind of things, but it’s artistic freedom. It’s a picture of hell and skeletons with a bunch of fucking hard-ons. [laughs]

Dead Rhetoric: Taneli was in the band during the early 90’s while he was doing Sentenced. What do you remember about having him around?

Luttinen: What can I say? It was great times. Lots of people don’t know or remember is that he designed our logo. He had just joined Sentenced in 1990 or 1991, and I used to hang around a lot with Sentenced’s drummer [Vesa Ranta] back then, and, I just happen to mention to him we wanted to change our logo because our just sucked ass. [laughs] Vesa mentioned we just got this young guy who joined as a bass player and he’s a really great artist and a couple of days later, he gave us the logo we are still using today. It’s a fucking great logo.

Luttinen: We were really young back then, and when Taneli joined Impaled Nazarene, he was only 16 or 17, and I was 19…you know how young guys are. We like to drink and party. [laughs] All the crazy ideas we put on the albums came from when we were partying and talking shit.

Dead Rhetoric: As for the track listing, you left off the word “Goat” in any of the song titles. Are you starting to move away from it?

Luttinen: No, it’s an experiment. I was starting to browse some internet forums when Road to the Octagon came out, and people were complaining, “Isn’t this goat thing already over?” So said I was going to drop it, but the album track #1, “King Reborn,” is actually “Goat King Reborn,” I just left out “goat” from the title on purpose, just to see how people would react. And of course, when we released the track listing, everyone was complaining, “Where’s the goat?”

Dead Rhetoric: I thought that too.

Luttinen: I was dying from laughter. At first people are complaining why we are still doing the “goat” songs, then people are crying, “Where are the goat songs?”

Dead Rhetoric: You don’t strike me as the type to read internet forums. Do you go on them often?

Luttinen: I don’t really follow any new music, but I do read through the music forums from time-to-time, just to see what is happening.

Dead Rhetoric: Has anything been written about the band that has surprised you?

Luttinen: I’m used to things already, so it’s nothing. One thing that is really irritating is Wikipedia. On the English page, it says Manifest is banned in several European Union countries, which is total bullshit. We’ve tried to change it several times, but they won’t, so at least get your fucking facts straight. I don’t know…it’s really irritating in that sense – lots of journalists read that website and take everything at face-value, like it’s written there, so it must be so. It’s really stupid.

Dead Rhetoric: I’m trying to think of the songs on Manifest and nothing controversial jumps out, so I wonder why it would be banned.

Dead Rhetoric: Same thing with Nihil – I can’t think of why it would be banned.

Dead Rhetoric: You know what they say – there’s no such thing as bad publicity.

Luttinen: In this case, it was very bad. When we went to tour in 2006, we booked this 10-week European tour. Before the tour, we quit all of our jobs because we thought we were going to do a huge tour and laugh with the money we will make. The German antifa (the German term for “anti-fascism”), they attacked us in a very big way. In Germany, the local music clubs, most of them get government funding, so their antifa was sending emails to local politicians saying, “Look, there’s a Nazi band from Finland coming to play.” Of course, immediately they sent emails to the clubs saying you must ban this band. We had 13 or 14 shows in Germany, and we could only play two. We lost huge amounts of money on tour. We didn’t know the German touring agency was close to going bankrupt, so naturally, on the last day of the tour, they went out of business. [laughs] It was a fucking nightmare. It took us two or three years to pay all the money back to Osmose.

Dead Rhetoric: We talked about this at the beginning in regard to drinking, but, are you starting to mellow with age at all?

Luttinen: No. [laughs] It’s kind of like…the hate isn’t maybe so obvious, but you start to put it in a different form. Absolutely no mellowing. I still hate people as much as I hated them back in the 1990s. Maybe it’s different; more like pure despise now. You go out and you just see the stupid people and go “Oh God, what is this shit?” Nothing changes. The whole planet, mankind isn’t evolving. We are stuck in this stupid period where mankind is chasing its own tail. The only way to get out of that is we should just ban every religion. Then everybody would open their minds for science and shit, then we would be taking some huge steps forward.

Dead Rhetoric: So are you watching what’s going on with Russia and Crimea?

Luttinen: It’s fucking crazy. I think no one was seeing that wasn’t going to happen. We have a festival in Ukraine in July, but it’s in the western part. It’s 1,000 miles from Crimea, and I spoke with the organizer and he told me you don’t see any of that shit in the western part. I think it’s safe to go – Deicide just played there a month ago.

Luttinen: You never know what the fuck is going on in the minds of the Russian people. It has a lot to do with the Soviet Union falling apart; there’s this old-school communist [front] in the Russian government that are looking back going, “What the fuck? We lost all of these countries like Estonia, Latvia, Lithuania…” They lost so much ground that they hope one day they can be back as to where the old Soviet Union was.