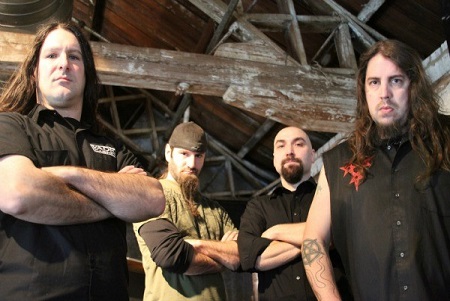 Dead Rhetoric: Yeah, definitely. It sounds like you know exactly what you are doing.

Vigna: We try. All the solos I did when I was out on the Marduk tour. I was just doing it backstage every once in a while, the mixing didn’t happen until a few months later because [producer/engineer] Zack Ohren who mixed it had other projects he was working on and we didn’t have a deadline yet. The actual, final mix wasn’t done until December of last year.

Dead Rhetoric: What were the biggest challenges with the Kingdom of Conspiracy record? I mean, I could imagine coming up with an album title can be a very time-consuming task…

Vigna: That was the hardest thing in the whole damn record! It’s like we got the songs together, got in the studio got them recorded then it took like months to figure out the song titles. It kills me, we’ll do a whole ten songs worth of lyrics in the studio within two weeks no problem but coming up with a title for the song was just a big ordeal. Then I came up with Kingdom of Conspiracy and one of the lines I came up with in that song we thought about using for the song title and we said, okay that works. Three months after the fact, we ended up going through so many different things for the album title and then finally we said that would work well for the record too. We asked Steve, our drummer, “What do you think, Steve?” “Yeah I like it” alright good done [laughs]. It was funny, that part took longer than the writing and recording process. Just to come up with the right title for the record, it’s ridiculous but it’s true.

Dead Rhetoric: With your ninth release, the lyrics take a darker, more Orwellian-like twist. Why did Immolation opt to move in this direction lyrically versus touching up on religious themes broached on the first few records?

Vigna: We did religious themes for a long time but as of Unholy Cult, we really did stray away from that and we started getting more into what was going on in the world. Once 9/11 happened, we started coming up with other stuff, not that any of the other stuff wasn’t relevant but we started looking at everything around and being like yeah. Little by little, especially on Majesty and Decay that could been, that almost is a concept record not on purpose but that kinda deals with similar themes, we took it to the next level with this record. Looking more toward the future, where we are headed and how things are today. When you really look at how [George] Orwell looked at this stuff back in the 50’s, now we are really getting there, you know?

There’s so much stuff these days from the technology that’s watching us all the time, how they are manipulating the food that we eat, how the powers that be are just trying to really take that control over everyone and it’s happening in not so drastic ways that you see it but drastically beneath everything. They use safety – the idea of the terrorists, the war on terror to get us to give up our rights and all that stuff is happening in front of our eyes but we’re not realizing that. That’s why we thought it was important to write about all of that and each song on the record kinda looks at different ideas within that whole spectrum that lead up to that.

Dead Rhetoric: Did you foresee writing in this way as a way of relating to your fans?

Vigna: I think everything we’ve done in the past they can relate to and I think this [record] they can relate that much more because of everything that is going on. I think it has because a lot of people have said both on Facebook and in-person, “Wow, it’s cool you guys are writing about this stuff and what’s going on” and they get it. The first lyric videos, especially Kingdom of Conspiracy, went up online they were like wow. I think the whole thing with the album cover, Kingdom of Conspiracy, a lot of people who at first when they heard it they were like eh, I don’t know. Once they saw the lyrics, they were like okay I get it now.

People, for whatever reason, didn’t like the artwork read the lyrics and heard the song were like, “I get it now, wow the artwork works totally perfect with this. I love it.” It’s kinda cool that they look at the lyrics that deeply because we’ve always been lyric people. The music has got to be great but the lyrics have got to be great too otherwise the music is somewhat pointless as far as we’re concerned. We want the lyrics to be strong as the music and have meaning, you know? So the fact that fans are really getting into that with this record and that they understand it which is good.

Dead Rhetoric: I felt, in some senses, that myself listening to the latest record, I could relate to it because I see that. With what’s going on with the food, putting GMO’s in our food…

Dead Rhetoric: Especially since you are from the States, how there are so many rights that Americans have and it’s slowly being taken away.

Vigna: Slowly being diminished, yeah! The sad part is that people are not paying attention to it and the fact that the media, for instance, which is another song that we deal with “Spectacle of Lies” talks about how the media basically shows you what they want to show you. They paint a certain picture of things but it’s not really like that. For instance, when they had the NDAA thing that came out and they put a clause in some of the stuff they were passing in Congress. They wanted to give the right to the military to be able to basically show up to anyone’s door, take them into custody for an unlimited amount of time. U.S. citizens without any cause or anything, just out of suspicion. They put that little thing in there but you don’t hear that on the news though.

You have to look through the non-mainstream news to hear about stuff like that and to me, that’s a much bigger story than who’s winning American Idol you know? You see all the bullshit on the news and that’s because it’s run by the corporations. People say that’s not going to happen to me, but little by little by little it becomes commonplace and little by little by little the next thing you know, you have no rights at all. Just look at Nazi Germany back in the day, similar things happened. That’s why we thought it was very important to get the lyrics and the music right for this concept.

Dead Rhetoric: Well, I believe you guys have translated that very well into the latest record. What is on the agenda for Immolation for the rest of 2013?

Vigna: Not a lot really [laughs]. We got this tour so that was cool. We were going to do headlining run in Europe in the fall but our booking agent has a lot of stuff going on so we may wait until January for that. Other than that, we got Costa Rica in December for the first time. Whether or not something else will come up for the United States and Canada before the end of the year, it’s very possible. I don’t think we are going to do a headline run but we’ll see what happens. Last year, we were out for five to six months between South America, recording the record, European Festival run, followed by a whole month and a half of a European tour so it was a long span. Now we are trying to be selective, we do have jobs at home and although we are able to leave, we don’t want to be over-zealous [laughs].

Dead Rhetoric: [laughs] We’re approaching the end of the interview now, is there anything you’d like to say to your fans?

Vigna: Thanks for all the support, people like you for doing the interviews. We’re really lucky to have people who are into the music and appreciate the music. This tour especially, we’ve been gaining so many new fans because people come up to us, ask how long we’ve been around and I’m like 25 years and they say they never heard of us. They buy a CD or two and some shirts. We’ve been making a lot of new fans on this tour which has been great. The people who have been with us over the years, we thank them for sticking it out with us for a long time. We just look forward to playing for all the people we didn’t get to play for yet on this tour and hopefully we’ll be back again soon!