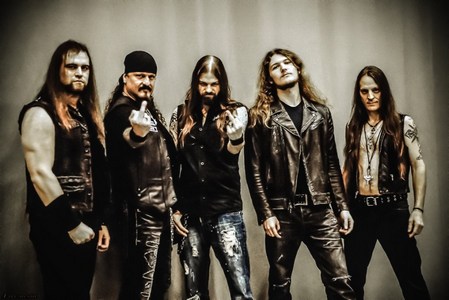 Dead Rhetoric: Should veteran metal acts like Metallica, Judas Priest, and Iron Maiden feel more of a sense of obligation to put together better openers stylistically for the future of the genre when they retire? Especially considering the chances they got early on in their career to move up the ranks…?

Schaffer: Oh man. From what I’ve heard of… we’ve done some shows with Priest, and we’ve played some festivals with Maiden. We’ve done one-off shows with Priest as well in 2008 across Europe when they were headlining. They were great to us, from what I’ve heard of with bands that tour with Metallica they are treated like gold. I’ve heard that as well from the guys that have played with Iron Maiden too. I would love to have a shot at going on a big kind of tour with those bands, it would be awesome. There are a lot of people that want that, and at some point, it does get kind of political. What favors the management has with other management companies, whatever. It would be certainly be an honor- but I can’t get in their heads and make any kind of judgement over what they should be doing. At the end of the day, (as) Iced Earth we have always forged our own future, and it would be awesome to be included in playing with any of those bands. Will that happen? I have no idea.

Dead Rhetoric: As a fan of your music for so long, how frustrating was it for the band to deal with the technical issues and abbreviated headlining set at the New England Metal and Hardcore Festival a few years back?

Schaffer: We’ve done that festival a few times, so I’m trying to think back. I honestly don’t remember- we did so many shows. I think on the Plagues of Babylon tour we did around 160 shows. That shit happens- anytime you go into a festival type of situation like that, those kind of things happen.

Dead Rhetoric: If you had the opportunity to teach a freshman class in high school or at a freshman level of college, what subject matter would you consider teaching and why?

Schaffer: (laughs). That’s an interesting question, man. You’ve got some cool kinds of questions. Most of the time it’s the same kind of (things) over and over. I like this. I think I would probably have to really get them prepared for the world. I feel like the culture has gotten so soft, so wimpy. These kids are growing up in like a bubble, where they have no clue what they are getting ready to get into. This whole safe space zone, and maddening political correctness, it’s killing our species. It’s creating people that are so weak they aren’t going to be able to make it in the real world. The real world can be pretty crazy. That doesn’t mean you have to be mean and hateful, but you have to have some kind of thick skin to be able to deal with what’s going to be thrown your way. It’s just reality, it’s not easy to be successful in the world. Maybe they’ll appreciate it, maybe they won’t- but to really get somewhere in this world you have to have drive and ambition, you have to be able to handle failure. You are going to hit roadblocks, and you are going to have a really hard time. Quitting with your tail between your legs and moving back in with your parents might not always be an option. I would try to inspire the kids, inspire them to be warriors. Prepare for things to come your way, but don’t pretend that everything is in a perfect world out there.

Dead Rhetoric: How do you handle failures and setbacks personally?

Schaffer: I deal with failure a lot better than I would have a long time ago. I’d be more angry about it, and I think that’s symptomatic of being a young man. My dad did this for me- he helped drive me, so that I would not quit. I’m not accepting that. It’s all somehow connected to having that peer in your life, a friend, close elder, parent, whatever, grandfather – whoever that person is to inspire you to not give up. My way of dealing with failure now by being older and wiser- I am always ready to rise to a challenge. If somebody says I can’t do something, there’s always a part of me that says, ‘oh yeah- just watch’. I don’t think that is ever going to go away. How I do that is different- I’m calmer now, I’m able to look at a wider view of what my options are. When I was a young guy, if there was a brick wall I just put my head down to go through it. Now I look at things as a way around the wall, it’s a part of growth.

Dead Rhetoric: Do you feel that the care and importance you’ve placed on artwork and merchandise for the band pays dividends in the long run – building the Iced Earth brand as much as the music and live performances?

Schaffer: Yes. It’s a part of the whole thing- it’s really never been anything else. In the early days when Century Media had so much control over the artwork, it was a nightmare. I would look at some of it and know it was horrible. It wasn’t until Burnt Offerings that I was able to be involved in it, and even that was a very limited budget. It was a step in the right direction- and then with The Dark Saga and everything after that we started to use our own resources. It’s important for merch and all that stuff but it’s important for me as an artist to sit back and hold the product in your hands. Here it is, it’s finished- and it’s a really cool thing, It started to be very satisfying from Horror Show on because it was my idea to have artwork for each song in the layout. I’m pretty sure that I’m the guy that pioneered that, because I never saw anyone else do this before. I know there are a lot of bands doing it now. Especially since I’m into comic books, it gives people cool things to look at as they are flipping through. I’m going back to old school… as a Kiss fan, when I got a new record, I was looking forward to whatever was inside. Whether it was a poster, you knew they had brilliant bad ass pictures, whatever they had. It created excitement, and I remember that.

We are dealing in a whole different world now, it’s all about digital downloads and streaming. That’s why it’s exciting for me to actually see people getting back into vinyl. It’s never gone away- I never got away from it. Every album that Iced Earth has ever made has been released on vinyl. But what I do see different is when I see my 12 year old daughter and young teenage girls getting into vinyl in the United States, that tells me there is a trend coming. Where is this coming from? People are going to rediscover the cool factor of vinyl, how it sounds, and how it’s more of a social thing to sit down with your friends and listen to a record. Because it takes some work, you are more likely to listen to the whole record- flip the side and not just skip through constantly. I see a lot of kids that think they are sitting around hanging out together- they are on their phones or tablets, but with their earbuds in their ears listening to things in their own world. When they are listening to records, they are having this social experience together, talking about the songs, the art, the part, it’s like a thing that happens. It becomes more social, it’s awesome to see. I don’t think that vinyl is going to come back to the point where it’s going to save the music business where it was, but it gives me some hope that young people are going to start experiencing music the way I did, which was a lot cooler.

Dead Rhetoric: I also remember seeing a recent photo online when you visited the Music Outlet record store in Enfield, CT because you were up in the area working with Zeuss on the mixing/mastering for the new record. What are your thoughts on the importance of record stores even in this digitally driven, technology fast scene?

Schaffer: I love going to record stores still. I think it’s awesome. That’s another thing that I hope will be a result of product and vinyl coming back- that these types of stores will be able to stay in business. It’s an important part of the experience- it makes you get off of your phone. What’s fun is going out and looking through the records and taking that gamble- I don’t know, I’ve never heard of these guys, but this album cover is cool, let me check it out and see what happens. It’s inspiring and (I) hope it continues. It’s one thing (that) guys my age or in their 20’s and mid 30’s are buying records- but when you have pre-teens and teenage girls going out looking for vinyl, there’s a sign something is going on. Doesn’t even matter if it’s 21 Pilots or more commercial stuff, the fact is they are getting into the concept of this. For everybody that really loves listening to music, it’s a very cool experience- see the lyrics, the vision of a band is not just a screenshot on your iPhone. The artists that do this work, regardless of what business they are in, the type of music- they are putting their hearts and souls into this. When you go get a physical product, you are actually experiencing the vision of the artist.

Dead Rhetoric: What does the touring itinerary look like for Iced Earth over the next twelve months or so?

Schaffer: It’s being decided now. We are doing some festivals in Europe this summer- back and forth. The first real headlining tour for this record release cycle looks like it will be in North America, and Europe later in the year- possibly early winter.