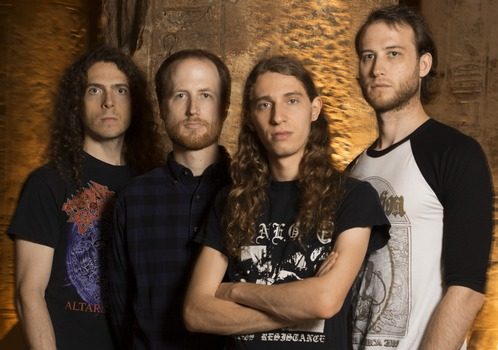 Dead Rhetoric: At least at the start, you had a more old school sound that you have evolved and progressed from there. What’s your take on the death metal scene?

Jamie Knox: I just don’t tend to really get behind music that is purposely trying to recreate things that have already happened. I can very much enjoy things that are having, and bands that are coming out, because some really amazing shit is coming out. But in the back of my mind, I know that these aren’t things that will have a lasting impression on me. 20 years from now it won’t be something that I’m reaching for in my collection. Perhaps that’s an unnecessary and unwarranted judgement call on what is being released, but as a music consumer, I have always gravitated towards things that move me and make me think differently.

While there’s something to be said about listening to something that is going to smash my brain and destroy everything in my wake, there’s a time and a place for that. But they aren’t the ones that tend to stick with me. It’s the ones that change my perspective on what I think music or what a certain genre is – that’s what I gravitate towards. For me, I don’t see a ton of bands going for it. I feel a ton of bands going for ‘I’m going to steamroll you with some fast and heavy shit,’ and while I have respect for it, it’s not my favorite thing in the world.

Alex Kulick: There so many bands, press, and so many things to get through. I think for all of us, heavy music is one of our most common environments. We have heard so much, and all four of us love so much across the spectrum. It’s really difficult sometimes – if you are trying to build a house and you see a house built really well, people are going to build it that way – I think a lot of bands are doing that with different genres. Obituary wrote a great death metal album – people write albums like that.

But when you combine that way of thinking with the crazy saturation of bands…people tell me 8,000 things to listen to every day, it’s hard to get an idea of what’s going on. I think there’s a lot going on that I don’t know about. I think there are metal scenes and death metal scenes that I don’t know anything about. I am getting things through friends and publications. I live in Philadelphia so I know what’s going on there to some degree. But it’s definitely the kind of thing where I feel compelled to make music that would excite me outside that framework, in some way.

But also, there are certain bands that are trying to totally ditch the framework and do something completely new. From my somewhat outside perspective on Horrendous, Jamie, Matt, and Damian, in their own different ways, fucking worship at the feet of the people that did it the very best in the first place. Not just death metal, but lots of different types of music, and they have a very deep knowledge about what makes them good. They [Matt and Jamie] could write you an essay on why Rust in Peace is a perfect album from top to bottom. Damian could tell you why you aren’t going to make a better melodeath album than In Flames did. To go and try to make new and exciting things, but to also harken back is a hard thing to do, and they do it really well.

Jamie Knox: I have never actually been in a band without Matt, so I wouldn’t even know what it feels like. This feels very natural and regardless of what style we are playing, we know each other so well musically that it is going to gel and work out really well.

Damian Herring: There’s different aspects to it. Obviously, I feel like in a way their kinship has rubbed off on me. In how close they are and how well they work together musically – I feel that rubbed off on me musically when we started the band. Going back to an earlier question, we always had a good chemistry together, and I think that part of it is because they had been in bands together for so long. That facilitated me joining and all of us being able to meld our ideas and write well together. So it’s pretty positive, but sometimes they can team up and strike down an idea, which they have that fraternity [laughs].

Alex Kulick: It’s a big death metal family isn’t it? We are somehow all Knox brothers in a sick way [laughter]. It’s very strange. All of us being in different situations, there’s something real freaky and magical about the brotherhood thing. You can be best friends and call yourselves brothers, but when you grew up together and have been through everything thick and thin, it’s a different thing. I think Matt and Jamie can sometimes speak telepathically, musically, and it’s an amazing thing to see. Matt has been mouthing drum patterns to Jamie for a decade and it’s the most creative and coherent drum part you’ve ever heard. That kind of shit is something that develops over a long time.

It’s an inspiration to me. I was a single child and grew up in a tough family home, and I had a number of friends that I considered siblings, but to meet two siblings – when I see Matt I see Jamie. We always do things together. They are a model for siblings, hands down. It’s a treat, honestly. I’ll bounce back what Damian said, they are in the thick of jokes and all fun and games, the brother power can be quite large if you are the butt of a joke for both Knox brothers – it can be fairly embarrassing if they are both coming at you at the same time [laughter]. I’ll be the first to admit it, but it’s a special thing. I remember after touring with Obituary, people would talk about the brother shit, because of the Tardy brothers, and I remember thinking that I’ve experienced this – brothers in metal, it’s a real thing. Don’t underestimate the power!

Matt Knox: To add to the brotherly conversation, a lot of people don’t know that Damian and I lived together for four years. What essentially happened was that Jamie was already at the University of South Carolina, and Damian as well – I showed up to go to school there and since the first day I got there, we all hung out pretty much every day. That was the way it was.

When Jamie moved on and started working, Damian and I lived together for the next few years and it just kept going and going. I think that also heightens things, and even Alex now, I lived with him last year and half-lived with him the year before that. I think it’s this expanding family – most of the time we see each other we aren’t playing music, we are just hanging out. I don’t know if most bands have that dynamic where the relationship outside the music matters more than the music itself. It flows out of all of that, and is a creation and product of what’s happening with us.

Dead Rhetoric: What plans do you have for the rest of the year and beyond?

Jamie Knox: We have a couple of shows lined up this year. We have a cool one-off in Houston at this brewery. They are flying us down to play. That should be cool. We also have a short run of northeast dates for the album in November which should be a lot of fun. We are starting to think about potential touring options in early 2019. The short term is really just supporting this album and getting out there and playing it to people. Long-term, I don’t want to speak for everyone, but I can’t imagine that anyone has any super concrete plans. We just want to keep doing what we are doing now and keep driving forward. In a few years, we want to release something better than Idol that takes us somewhere new.

Alex Kulick: We are playing our first European show in the spring [2019] at a festival called Gravelands. Part of the Season signing was to get some experience in Europe and we really want to get out there. We want the album to hit the ground and see what happens.