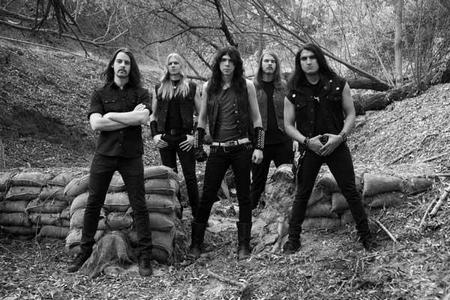 Dead Rhetoric: I think a lot of bands forget about not only the time you need on your instrument, but also as a band what works in live situations, what works songwriting-wise, personalities and getting along with each other…

Luna: Totally. There’s already enough variables into writing music with people, but when you take that dynamic on the road and travel with these people, you are in close quarters with these people 24/7, it’s a totally different dynamic.

Dead Rhetoric: As far as songwriting within the band, do you come up with individual parts and then bring them to the band to refine or do you guys work things out in rehearsal situations and jam ideas back and forth?

Luna: We did that more (jamming) for the first record and did a little bit of that for the second record, for this most recent record we had riffs that we would send to each other. I’d have a song structure, send it to (guitarist) Eli (Santana) and he would kind of re-record it and send it back, add a bridge or solo part to it. Or Eli would have a chorus and a verse riff and I’d sing over it, then he would build a bridge, an intro, and solos around it. Or I’d add a little part here or there, so we swapped things digitally online through sharing files. It worked pretty good- we really wanted to jam the stuff out as a band before actually tracking it. We were so behind deadline that we had to crank things out, we had already taken so long. We took a break from touring to chill out and focus on writing, the process took so long that by the time we got to recording we didn’t really have that long to screw around anymore. That’s how our last two records were.

Dead Rhetoric: Who designed the cover for the new record, and how important do believe art is in heavy metal?

Luna: I think it’s really important. This concept was something that Eli had thought up, so we shot it to an artist and we weren’t really happy with it. And then, Karen from Hazmat Design, that’s (drummer) Tyler’s girlfriend, she proposed the idea as she does album art as well. She took a stab at it, the rough version looked really good and the final version is even better. We were really happy with it. I really liked Judas Priest art, Screaming for Vengeance and Defenders of the Faith, that kind of futuristic, art deco vibe to it. I also like the Cirith Ungol album art, anything kind of medieval with demons and wizards I end up liking as well.

Dead Rhetoric: Speaking of Cirith Ungol, you are going to be performing at Frost and Fire 2 festival with the original lineup of White Wizzard – how did that come about because everyone on the outside looks at things that when the separation happened, you weren’t really getting along, have relationships been repaired?

Luna: I guess at this point, the things weren’t really as bad as the press reported them to be. We’d always see Jon Leon or James LaRue around. They had been kind of talking with me to get back together for a few years. When we toured with Night Demon, Jarvis who is responsible for the Frost and Fire festival, he also manages Cirith Ungol, and he talked about having this White Wizzard reunion with the original lineup. So we said alright, we can do one show, what’s the harm in that? I pitched it to the other guys and they were totally down with that. I think our set time may only allow us to do the High Speed GTO EP.

Dead Rhetoric: What are some of the albums that you cannot live without- they can be metal or otherwise?

Dead Rhetoric: If you had the ability to change certain aspects of the business model or scene, what would you work on to build a better future for heavy metal?

Luna: That’s a real deep question. If I had the ability I would find a way to bring heavy metal back into the spotlight to where people appreciate it like they used to. Especially in the states- if you go to Scandinavia, heavy metal is on the pop charts, in parts of Europe as well. For some reason in the states, it’s just not like that. Some other way of getting more money from music, which I don’t foresee happening – but that would be great.

Dead Rhetoric: We all know that the Internet has had a very positive and negative influence in the sense that you can get easy access to music instantaneously, but the problem is there is so much music out there that it’s hard for people to handle it all versus the 1980’s where it was a more important medium because it was a major form of entertainment.

Luna: Yes- also just digital music in general, anyone can get it. Where there’s a will there’s a way. When music was mostly analog, that was all you could do- you had to have the physical copies and you had to pay money for those physical copies. That’s where a lot of the revenue came in. That being said, I think it just pushes bands to this higher limit. You have to work harder and be even better than some bands that would make a great record and then suck live. Now it just pushes bands to hone their craft a lot more, really fight for it and be hungry.

Dead Rhetoric: What are some of the best lies you’ve yet to tell about yourself – or others within the band? I know that Eli for instance gets a lot of jokes going about his Uncle Carlos Santana for instance…

Luna: I don’t think there’s anything that is hidden, we are pretty vocal about that side to make fun of. I think that’s important, not taking ourselves too seriously. I think a lot of people don’t know that I’m really into folk music. That’s not really considered tough or heavy metal, but I’ve been really into Bert Jansch and Nick Drake kind of stuff. I may be doing some sort of solo project with that as well. I still wear short-shorts and do yoga occasionally before a show. A lot of us are book nerds and comic book nerds.

Dead Rhetoric: Guitarist Alex Lee is great on the yo-yo. How did that exactly start with him, has he gotten the other band members into it as well?

Luna: We’ve tried, but haven’t had the patience for it. He’s really good, he started when he was on tour with his first band Bonded by Blood. He picked up a yo-yo, he used to use one as a kid. He picked it up to pass the time on tour and then it progressed to a full thing where he would go and compete at state competitions. But of course he would get beat by 12 or 13 year olds that that’s all they do for eight hours a day. Still he’s amazing, I think he just stopped working for this company because we are touring so much but he was working for Duncan Yo-Yo’s as a salesman.

Dead Rhetoric: You’ve shown some of what you do for side jobs on your social media pages, as you do graphic arts work, right?

Luna: Yes, I do a bunch of different things. I was working with a health food company for a minute, helping with marketing. I also do screen printing merchandise for other bands. Whatever odd jobs I can scrape together in between tours.

Dead Rhetoric: After this tour you’ll be back on the road with DevilDriver for a couple of weeks before you do the next tour with Exmortus and Spellcaster – after doing all these North American dates, will you plan on getting overseas?

Luna: We are trying to get overseas for the fall, or South America. We want to push that angle, but nothing solid just yet.

Dead Rhetoric: Have you started assembling ideas for the follow up album, even if they are on the backburner?

Luna: We are always writing, so we always have stuff to pull from. Whether it’s lyrics or melodies, riffs. As far as songs, we haven’t really done that. I have some good ideas that it might entail.