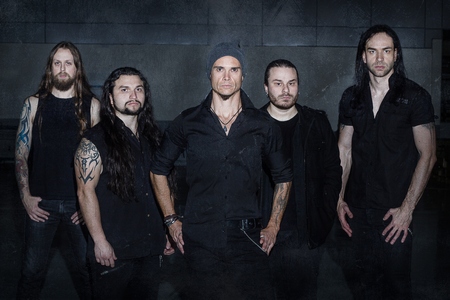 Dead Rhetoric: Silent Revenge seems to be a return to Skull Collectors form, featuring a number of soaring vocal passages, lots of fast and furious drumming and some killer guitar harmonies from Abel Camargo and Renato Osorio. Please tell us why long-time guitarist Diego Kasper stepped away from Hibria and what Renato brought to the table to make this album so strong and powerful?

Eduardo: Diego left the band for kind of the same reason that Marco left the band. I know it sounds a bit emotional perhaps, it’s very hard to have a heavy metal band in Brazil. We are not in Sao Paulo, which is the biggest city in Brazil. We are far from the center, and we don’t play a popular kind of music, not even close here in Brazil. You must dedicate a lot of time and you won’t make too much money. You have to practice your technique but you don’t have a lot of time- you have to work to keep things going. Sometimes we teach in the morning, afternoon, into the night and then we rehearse at 10 o’clock at night and go until after midnight. If you have a different job that makes you happy but that doesn’t require all this dedication, I don’t want to use the word easier but you have more of a reward. You get more money, more free time, you can plan vacation with a girlfriend perhaps. We are still friends, we love Diego and Marco. I met Marco this week on the street, I was having lunch and untying my bicycle and he was coming with a big smile. I learned a lot with him, he is talking to me about learning the drums but he is not really doing it. He’s been saying this for a year.

Renato, he used to play with Iuri before, they’ve known each other since 1995. They played in a band together. I met Renato when I was 15 years old, actually he’s the guy that taught me to play the drums. I was going to rehearse, to try out for a local band. I asked him what he could do for me, he taught me on his couch and from that day on he has been my mentor. We worked together since 2003 at a school as teachers, we played together in a band called Fighterlord from 2003-2008. I joined Hibria, he joined Scelerata, and these bands went on this Japan tour. Scelerata was Paul Di’Anno’s backing band when he played here in Brazil, so we had these different paths. When Diego left the band there wasn’t another choice, Renato was the only guy for the job. He’s an awesome guitar player, he has a sensibility to music, a very high sensibility.

Dead Rhetoric: Are lyrics easy or difficult for the band to come up with because English is not your native language? Do you seek out additional help/ support to make sure what you are trying to convey makes sense?

Eduardo: We try our best but we always send our lyrics to an American guy and he helps us, reviews the lyrics and sends back suggestions to us. We actually know how to speak English but we are not fluent like someone who lives in an English speaking country. The idea gets really clear, but sometimes the vocabulary is not the most appropriate. So this American guy, which is Abel’s brother – he helps us to bring the ideas together.

Dead Rhetoric: How does the band balance the issue of flashy progressive parts or intricate technicality while maintaining a cohesive, proper arrangement and song structure? Are there times where you just have to trim the fat so to speak and leave parts out to create other material?

Eduardo: Actually no. That doesn’t happen very often because we always give… we don’t want to make the song really difficult to listen to. We respect the moments of the song, when Iuri is singing a verse, we don’t want it to conflict with the vocal lines. We keep things basic so Iuri can sing. Then we have some sections where we want to show something, maybe on the drums, then the arrangement can get fluid. Renato comes in as a producer to let us know when to keep things simpler, so that everything sounds in its right place. We have the shred parts very calculated. It’s not an easy job to keep things very fluid, but it’s our greatest challenge when we are writing the songs, if you know what I mean.

Dead Rhetoric: What do you think of the worldwide metal scene at this point? It seems like Hibria is gaining a wide following not only in South America and the Far East but now making inroads into North America- as you have the traditional chops along with a speed/ power base to appeal to a lot of different metal audiences.

Eduardo: I believe nowadays we have so many good bands in the world. With the internet you can show your material to the world independently. You don’t need a record label, this is good and bad because the music industry…we don’t want to talk about it, the record labels are closing and facing hard times financially. I believe we have great bands that won’t have the right recognition, it is a good time for the listener but perhaps not a good time for the performer. You can access lots of good material and great bands, we have some great bands here in Brazil. We have a band called Project 46, they seen in Portuguese but it’s extreme, something metalcore and they are doing very good as they are going to play Rock in Rio, they are doing a great job without proper record label assistance.

It’s full of great bands without too much space and support for bringing these bands to the world, touring and all that stuff. As you said, we are now going for North America. We are going to play lots of gigs in Canada and the United States, it will be a test to see how we are going, how successful we are in North America. We are really excited and anxious for that. We have toured Canada before, it was very nice to play. Small clubs but with an audience that were really accepting. They like the concert, they bought the merchandise, they kept in touch with us on Facebook and all that stuff. And now that we are going back we will see these people again and they will bring friends. I believe this is the way things go nowadays, because you don’t have too much money involved. You have to bring your standards down a little bit to bring these concerts to the people.

Dead Rhetoric: Who would you say are some of your role models as far as bands or musicians? Where do you see Hibria heading in terms of a fan base or popularity within the next 3-5 years?

Eduardo: Role models.. my influences as a drummer, John Bonham, Ian Paice, Tommy Aldridge, Carmine Appice, Vinnie Appice- they are the greatest. My role model… someone that I really admire is Bruce Dickinson because he’s an amazing human being. All the things he does- who doesn’t want to be like Bruce Dickinson? He’s the singer of the greatest metal band ever, he flies airplanes. Also one guy I really admire a lot is Glenn Hughes from Trapeze/Deep Purple. I am a fan boy of Glenn Hughes, I am not ashamed of that.

Dead Rhetoric: What concerns you or worries you most about the world that we live in today? If you were a leader, where would you put most of your time and energy to make this a better place for future generations to enjoy and cherish?

Eduardo: As a leader I would stop the corruption of the politicians here in Brazil so that we could make education better. Better health systems, there are so many things, the environment, people are very worried about the car pollution. We have so many serious things going on nowadays I wouldn’t know where to start. Here in Brazil we have a big problem with safety- it’s a very dangerous place. Right now it is 10 o’clock in the evening, and you can’t go for a walk on the streets.

Dead Rhetoric: Tell us your three favorite metal albums of all time, and what was the best concert or tour you’ve performed as Hibria?

Eduardo: The three albums… heavy metal albums, okay. I would say, Piece of Mind, Powerslave, or The Number of the Beast from Iron Maiden. I can’t choose one Iron Maiden album, let’s say Powerslave. Screaming for Vengeance from Judas Priest, or Painkiller I don’t know! Maybe another band… there’s a record that I really like a lot and I never get tired of, that’s Technical Difficulties from Racer X.

We had the opportunity for the inventors of heavy metal, Black Sabbath- we opened for them in our city, and Metallica also. We played in Rock in Rio, it’s tough to decide. We played in Loud Park, in Tokyo – we recorded a DVD there. When you stop and think about this, it’s very surreal. We are from a small town in Brazil and we recorded a DVD in Tokyo, that’s a very big thing. I couldn’t pick one concert because we have so many great concerts.

Dead Rhetoric: How do you spend your free time when you have downtime away from Hibria- any special hobbies or interests? Is it difficult to balance your professional life with personal time to spend with family and friends?

Eduardo: First I don’t have many friends (laughs). I do have some friends but they understand I am in a very busy band so we don’t hang out very often. We always keep in touch on the telephone- I am not the smartphone guy, I have a Nokia. I’m not always connected, so I prefer to call or visit my friends. I like to play video games on my free time, I like to read and rest, because it’s very demanding to play drums after midnight.

Dead Rhetoric: Let us know what’s on the horizon for Hibria over the next 12-18 months. I know you will be playing ProgPower USA as well as touring North America with Unleash the Archers- are there any other plans set in stone after that?

Eduardo: We are planning a celebration concert next year for the 20th anniversary for the band. But we are not thinking much about a new record, we have 5 albums and we haven’t had the opportunity to play these albums everywhere. The only country that saw concerts for our last album were in Japan and Brazil. So we have 5 albums to deal with and there are lots of songs we would love to play live. The basic plan to tour around the world, celebrating these 20 years, which I am a part of for 15 years now. As a drummer, 10, but I was promoted from drum tech to drummer, so it’s very cool. We have to celebrate that also! (laughs).