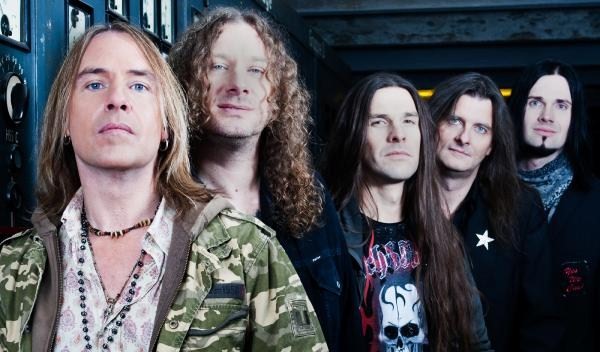 Being that this was the second time in the calendar year yours truly would be speaking to Helloween guitarist Michael Weikath, there was little trepidation as to how the chat would go. After all, the man is notorious for his long-winded, yet humorous interviews, something we got a taste of first-hand this past March. This time out, the focus was to be on the band’s blistering (yeah, that’s right) new album, 7 Sinners, so naturally, that’s the first thing that would be on Weike’s mind, right? Not really. Rather, Weikath wanted to talk about coffee and how Tenerife, Spain [Weikath’s, current place of residence] has strict import laws for it. Turns out, there isn’t a proliferation of Starbucks in Weikath’s neck of the woods because of said import laws. How does one cope without Starbucks?

Nevertheless, during the course of this hour-plus chat, Weikath did get around to talking about 7 Sinners and how heavy it is (very true), along with the band’s current formation, a design that the German is very much happy with, given how bad things were roughly 10 years ago around the release of The Dark Ride. It’s pretty easy to get Weikath to talk about things, so much so, that we’re splitting this interview into two parts. Here’s the first installment…

Blistering.com: 7 Sinners is your 13th studio album and I’m surprised as to how heavy it is. Why is that?

Michael Weikath: Beforehand, we had done the Unarmed anniversary record and by the time we had said we’d be back with a typical, mean Helloween record, that’s what we were doing. We had a bit more time during the demo phase and that’s what you get. Before, [Andi] Deris [vocals], [Markus] Grosskopt [bass], and me, we had no break to be spoken of for 15 years. This time around, there was a lot more time to come up with quality songwriting. Yeah, getting prepared a bit more. So it wasn’t a shot right out of the blue.

Blistering.com: So was this a reaction as to how mixed the reaction was to the Unarmed record?

Weikath: Yeah, that’s true. We had intended to come up with something extraordinary. When I was doing the demos, I was thinking “Weike, you need to do more clever harmonies than you usually would do because you have the time. That’s it. Make something out of it.” That’s what I had in my head most of the time. We have about four or six more tracks that we started in the process of the 7 Sinners but got skipped, but what you hear is the 20-21 tracks is what we started on. What took the longest, was coming up with more tricky, more intelligent harmonies. After the verse, the bridge might get more interesting that what I would usually do. That took so long. I had an idea of all the parts, and then how do you fling them together?

Blistering.com: Looks like Andi got the hot-hand when it came to composing material this time out. Does that usually happen?

Weikath: Deris is the one who’s like…a fountain of tracks [laughs]. He’s always coming up with something. It may be repetitive sometimes or not, but he must have his reasons for the parts he does. Usually he’s tight on how he wants to have things. He’s oozing with tracks usually. This time he offered eight or ten tracks, but that’s usual. He always does material for himself and says, “If you want to take this for the Helloween record, you may.” So that’s why sometimes strange stuff appears. Mr. Gerstner [guitars] has offered five or six tracks. Markus had five or six; I got in there with four. You can see what’s left is what you get on this album.

Blistering.com: You didn’t mention Dani [Loble, drums] yet, and I think his playing might be the most important aspect to the album. Some of the stuff he’s doing is more extreme than anything Ingo [Switchenberg, former drummer] and Uli [Kusch] ever did. How much of an influence did his drumming have on the album?

Weikath: A lot. He’s been put in that…hole that he had to record 21 tracks. He did two drum sessions, so recorded everything there was. Clearly, he wanted to make a point with his drumming. He also had a bit more time. He’s also done some drum workshops in his spare time, but I don’t know, somehow the idea was born in his head to do more on this record. Before, it would be for him to come in and drum the demos as quickly as possible and the material was quite new to him. This time, he wanted to prepare something quite extraordinary. From what I saw and heard, there’s things on there that are not playable if you don’t know the proper technique. I still don’t have the time to ask him [laughs]. I don’t know if these things are extremely extraordinary or tongue-and-cheek, or whatever. As someone who’s not a drummer, it’s like, “Oh, oh really, you’re doing that?” So I still have to ask him.

Blistering.com: Like on “Are You Metal?” which takes the drumming to a whole new level.

Weikath: Even though I want to remind you that we did some extremely intricate drum patterns on “Born On Judgment Day” [off Keeper of the Seven Keys: The Legacy]. That’s the first track him and me worked on, and I’ve been putting bass drum events in the digital editor and he was happy about it. To him, it was really something new and he accepted most of the bass drums I put there, and copied those. He thought they were unplayable, but it was like, “Can you do this, guy? It will put you apart from other drummers.” If you want to get into that, it’s that madness on “Born On Judgment Day.”