Helloween – Humor Has No Price 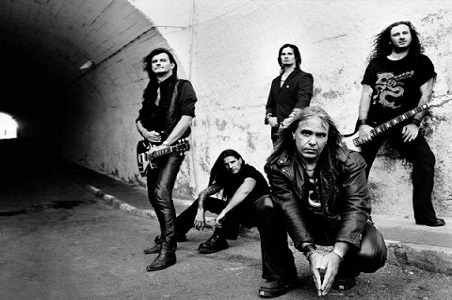 Blistering.com: This most recent version of the band is about five years old. How does it compare to some of your previous line-ups?

Weikath: It’s easy with Dani. He’s peaceful, this Jerry Lewis-duelling-Buddy Guy on drums kind of guy. Extremely funny, has long hair, Alice Cooper revisited. He’s obedient and a world-class drummer. Respect. Big Ingo [Schwichtenberg, former drummer] fan, who is one of his idols. Who could ever replace Ingo? Anyway, Dani likes to talk the trade about someone he admires…he would have loved to have been there [with Ingo]. I remember Ingo got this big Sonar kit and it was like, “Woo! Can you play it? And this was from Gonzo [Sandoval, Armored Saint drummer]. He said, “I don’t go up to many drummers, but your guy can play!” I tell Dani these stories and he gets the biggest eyes!

Sacsha [Gerstner, guitars] has been in many cover bands in Germany and the thing about German cover bands is that many of them are pro. They’ve been to the states, they know people, have blogs, do Skype, so they’re connected. Some of these cover bands are bigger than the real bands. But Sascha’s been around. He can play technical, is a composer, arranger. Coming to Helloween…it was a pro fit. He could have played in Halford; he reminds me of that approach. He’s a geek and so I am, so we have no problem meeting in the middle.

Blistering.com: Let’s veer off the course and try something different. I’ve chosen five songs that you’ve written. Not Kai songs. Not Roland or Kiske or even Deris songs. Your songs and I’d like your thoughts around each of them. Let’s start with “Power” from The Time of the Oath.

Weikath: I had this dream about the Scorpions where I went to one of their concerts and they played their new single. When I woke up, I thought, “What was that song like?” The song I dreamed of was called “Be Better,” but I had to step it up and make a new track and I still knew how it went. It was similar to how “Power” ended up. So I woke up and thought, “What was it? I Ah…I think that’s awesome.” So I put it together, did the placement… “Hey cool, here’s the demo.” Presented it and came out so fresh that there was no discussion. It became the next single.

Blistering.com: “The Game Is On” from Master of the Rings.

Weikath: I was playing Tetris in my New York City apartment around ’90 or ’91 and this black guy from Holland invited us to party where they were serving purely German food. I thought, “Yeah, cool – German food.” This guy ended up being driven out by Gypsy’s. He was trying to sell some change, watches. Thrown out. Have a nice day. So I called to get out ended up playing Tetris and I swear, I felt like the walls were caving down on me. It was crazy. Eyes were fixated, cross-eyed. Of course I felt bad – I played GameBoy all day.

The song has this…I don’t know, Alice Cooper feel to it. The solo is total MSG [Michael Schenker Group], twin-guitar stuff. I think it sucks. It’s cheesy and didn’t come out to well. Reminds me of “Electric Face” from UFO. A typical Weike song.

Weikath: I got this computer editor, Logic. Marcus said, “Why complicate things so much? Take it easy. Not so much thinking.” So I found the tones on the low E string and it was the wrong tone to do the riff. So what? It was the last day this song was to be recorded and everyone’s like, “What’s the chorus?” And I was like, “You tell me!” I didn’t know. So I just imagined if Kai and I did something. We went to UFO in Hamburg after our “divorce.” We didn’t want to give fodder to the media and start stupid, childish rumors. No ammo. Behave, let’s be cool. Those people wanted to be, “Something’s going on with Weike and Kai.” No. So this show was in Hamburg and I thought, “When we unite, what would happen?” That imagination…when Kai and I did things, we had this strange chemistry. It’s not real; it’s like we’re falling higher.

Blistering.com: More recently, “Can Do It” from Gambling With the Devil.

Weikath: Ah, nothing out of the ordinary there. The “c’mon, c’mon” part was influenced by [British pop singer] Robbie Williams’ “Jukebox.” I took the drum pattern from a Rubettes song back in ’74 [does drum part]. It was a hit in ’74 in Europe and I always liked that time period. I edited a grand piano in there, so it’s like this “rock palace.”

Weikath: There’s that bit in Monty Python – “I’m A Lumberjack” that warmed to me. To me, that’s cult. It was ready, a great starting point and wow! A single! That should have went top 10 in the UK. I wanted to do something that was like some underground comics. Like ED Carr. Ever hear of him? He’s quite famous in Europe. He’s an overlord of dirty comic series. I also grew up with Mad magazine, so it was like a mock-up of a movie.

Weikath: We should be in the studio end of April or in May. We’ll start recording in June and we’ll be with Charlie [Bauerfeind, producer] again. Sascha can stay at home and do his leads if he wants during the day and I’ll work during the night with the engineer. It’s same as we did for the Keeper albums. At night I was with Tommy Hansen; Kai was with Tommy Newton during the day. We have a good mix of material right now and with Gambling… we got good reviews, so that’s great. We’ll try to do it again.