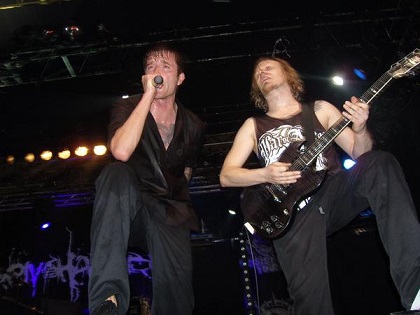 Blistering.com: Yourself and Alex [Dietz, HSB guitarist] do a great job in production. However, do you guys think you’ll use an outside producer at some point?

Weichert: Yeah, there might be some point, but so far we’ve never had the point where we look at each other and say that we’re out of ideas or we don’t want to do this now. It would be interesting to work with a producer, but maybe we would just do it as an experiment at first, like with one song first or something like that. I don’t really trust other people to handle my music. I mean, you’re putting a lot more effort in it than maybe some really expensive producer. There have been some records in the past that have really expensive producers produce a band, and you can actually really hear that they just had to produce a name and this guy didn’t have a clue of what the band is actually about. I’m disappointed very often by bands of which I’m a fan of and they have a producer that didn’t get the band at all and know what the band is about and what they’ve done in the past. This famous step forward with another producer, but that can be really disappointing with the real fans.

Blistering.com: The use of electronic music in your sound is something that you’ve used for a long time. However, at times it feels a little more prevalent on Invictus. Was that intentional?

Weichert: Yeah, this time we just dared to make it a bit more obvious. We had a dance beat on the Iconoclast record and the feedback for that was really, really good, and this time we just dared to do a little more. We just wanted to add a bit more of that pounding aggression to our music – another dimension of sound. You can’t go really further than just using playing blast beats and tuning guitars down – playing faster and louder. You can’t go any further and then you just have to look for new dimensions in your sound. We’ve always had this bias for electronic stuff in our music, and this time we just integrated it more into our music. I think we will do so in the future, as well.

Blistering.com: The duet between Marcus (Bischoff) and Sabine (Weniger) from Deadlock was pretty cool and an interesting change of pace. How did that come about and do you think that’s an element that you’ll use again?

Weichert: I don’t know if we will use it again. It was a really cool thing to work together. Deadlock is a band from our area and we are really close friends, and touring together. They made a huge step forward with their last record, which is amazing, I think. When I wrote the lyrics, I figured out that this was a very sensitive and emotional topic. So also the music would feel more emotional, and it would have been stupid to grunt and scream all the time in a song about mercy killing. We were looking for a more fragile approach. So, it was obvious to try a girl’s voice. We sent the tracks over to the Deadlock guys and they just sang something – Sabine just sang something – and we liked it. We didn’t change anything about it. It was just great and it worked out, but I don’t think we’ll do something like that in the future. We don’t want to be like Nightwish or something like that. It was an experiment for us. I think it’s cool to have a calmer ending to the record. That song – on the record you’ve already heard so much aggressive music that you’re maybe happy to hear some chill-out stuff to end the album.

Blistering.com: Do you have a favorite song off of Invictus and do you have any songs off of the album that you’re itching to play live?

Weichert: Yeah, my favorite song and a song that is really important to me is the song “Combat.” Music-wise, it’s the most experimental stuff we’ve ever done, and the issue it deals with is very touching – the child solider thing. Everybody knows that there are child soldiers around the world in almost every continent. The deeper you get into that topic and you read about it, and you see the biographies of these people and it’s really touching. It makes you really aggressive. So we really had to write a song about that, and there’s a video for it now. We’ve played it like twice or thrice already on some festivals, and it came out really cool. It’s going to be a cool live song.

Blistering.com: I was lucky enough to see you guys in Cleveland when you were here a few years ago. I know it isn’t easy for you guys to get over here, but do you think it’s a possibility for you guys to come back in the near future?

Weichert: Wow, you were one of the few! We were actually talking about coming back, but sadly it’s not that easy. We’re not doing this six, seven, eight-week kind of thing that people do in America. We can’t afford it time-wise. We get tons of e-mails from people asking when we will play the United States and North America at last. I’m pretty sure we’ll be back for a two or three-week tour or something like that. We’re working on something like that. If nothing works out, we’ll do a headliner run and play in front of like 100 people or so. As I said, we don’t have to look for that, and then we make people happy that want to see us and we don’t have to get a really big tour for eight weeks or something.

Blistering.com: Have you guys ever considered playing a one-off fest over here, like a Maryland Deathfest?

Weichert: We thought of something like that, but it’s always an issue because you have to get working permissions and stuff like that. It doesn’t matter whether you play two months in a row or one show. We were actually thinking about playing a show in Hawaii because we always wanted to go there! That would be great! Maybe we’ll do something like that in the future? Playing a one-off festival show would be cool thing as well, but so far we haven’t really gotten a cool offer to do it. We are aware that we would never get like hundreds of thousands of dollars to play – we’re not that big! But it would be cool, because you can reach so many people with one show. Now compare to some of the possibilities you have in Europe of course, in comparison it’s quite small. In Germany, you can fly in for the Wacken festival and play in front of 60 or 70,000 people, you know? At least it puts your name on the map if you’re on a festival like that, but there are also so many amazing bands around in America that can play these festivals, so the bookers don’t care about getting a rather small band from Europe.

Blistering.com: I read on the band’s page that you have a hatred for F.C. Bayern Munich. Must have been a pretty good feeling to see them lose in the Champions League Final then!

Weichert: What, you know stuff about soccer?!

Weichert: Wow, that’s cool! Yeah, that’s an issue in the band! Our singer is a Bayern Munich fan. I mean, I don’t hate them that much that I would be happy seeing a German team lose to an Italian team. I don’t hate them that much! [laughs] I was kind of sad to see they lost in something like that. Sometimes being a fan of a team like a Barcelona, or a Manchester United, or a Bayern Munich is just for people who are losers! They lose so much in their life that they just want to be sure with their favorite soccer team that they are on the winners side, so they just choose teams that win always. I think that is just boring. I’m a fan of a small German third league division team. Nobody knows them. I think that is more the spirit of the sport.

Blistering.com: Are you excited for the World Cup?

Weichert: Yeah, I think so, but I don’t expect so much from the German team this time. They have very young kids going there. To be honest, I don’t like contests where I don’t expect to win!

Blistering.com: Is there anywhere you’d love to play a show where you haven’t yet, although it seems like Hawaii is pretty high up on the list.

Weichert: Yeah, maybe we’ll make it to Korea this year? I’m really keen to play there because the country’s history is very similar to the history of Germany with the two parts of the country, stuff like that. To see how people think about it and how they live there and what expectations they have. That would be cool to go and play there. We have a lot of fans there. And yeah, the Hawaii thing is really cool! It would be really cool to play a show in Africa, which is the only continent besides Antarctica that we haven’t hit so far. But there are very few countries that you could play – maybe Namibia or Egypt or South Africa, or something like that. Maybe we’ll make it! We’re working on it!

Blistering.com: Is there anything further that you’d like to add?

Weichert: Yeah, people should give a listen to our new record and if they listen to our music they should also care about our lyrics and read them. Our music might be nothing totally special, but they go together with the lyrics. The lyrics are at least 50% of our message and what our band is about.