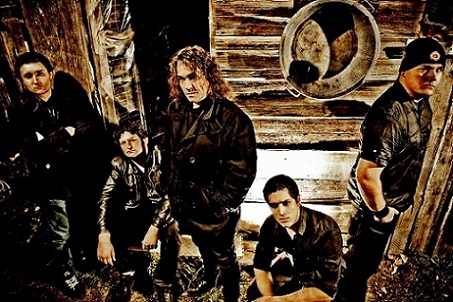 Dead Rhetoric: That has to be really rewarding for you, to see your two sons succeed like this.

Souza: It’s full-circle. It’s cool, but it really wasn’t planned out this way. Both of them have played music since they were young and have been around metal since a lot of my friends were in the Bay Area bands. They don’t know Chuck Billy as the singer of Testament – they know him as dad’s friend. They know these guys and I told them, Joey Jordison from Slipknot, John Temptesta, these guys have been around and if you want to achieve that, you want be one of those guys? You have to work hard like those guys. They got here because they worked their asses off. Nick got off work one day, it was a Wednesday at 3:00, I asked what he was doing: “I don’t know.” I said, “I know what you’re doing, you’re going into the studio to work on your kicks.” He said “Oh, that’s right, I am.” I have to be dad sometimes but I need them to work on their craft. They practice, and practice all the time.

Dead Rhetoric: Switching gears, we’re about 20 years out from when Exodus first folded and a lot of you guys had to return to normal life. What do you remember most?

Souza: [laughs] To be honest, it was really bad; it was a bad time in my life. When you’re a kid, you see these guys on TV and think that when you’re a rock star, you’re a rock star forever. But you don’t know how the business works. When you get in the business, you learn what it costs, what it takes and who’s in control. It took me a year to get back to work – I’ve been working ever since. I’m in the union now for 20 years – the California Carpenters Union. I’m a foreman. I don’t rely on music for my money.

Dead Rhetoric: So when Exodus folded, that’s what you pursued?

Souza: My brother was in the trade and it took me maybe two months. It was funny. I remember calling our accountant – it’s embarrassing but I don’t mind telling this story – We just got dropped from Capitol. What are we going to do? She goes, “You have about six months left of salary, then we’re not going to be able to pay you.” I said, “What am I going to do?” She looked at me and said, “You know what you need to do Zetro? You go get a fucking job.” I was like “Wow!” I was doing rock ‘n’ roll, then it was totally over? Holy shit.

Dead Rhetoric: This has been beaten to death, but thrash of your style in the mid-90’s was super-unpopular. Nobody wanted anything to do with you guys.

Sousa: Everybody down the line – you can go Forbidden, Overkill, Death Angel, Megadeth, and Anthrax – everybody had their problems. We couldn’t get a game of Jacks. The only band in business was Pantera, they were the only band doing any business. Slayer, they were barely surviving. They were doing little clubs with 500 or 600 in the mid-90’s. It was a dead period. I remember my kids being nine or ten and I was telling their mother – who’s not my wife anymore – “I wonder if they’re ever going to do know what I did musically?” Everything just stopped. Grunge came in and everything died. Everybody got dropped. You either got a job or tried to survive.

Dead Rhetoric: Did you stop following the scene or listening to metal altogether?

Souza: Yeah, for seven years I wanted nothing to do with it. Wouldn’t go to a show, didn’t fucking care, wouldn’t do anything. I didn’t care. I had little kids at the time, I was ready to do shit that way.  You did your time, but you’re lucky and fortunate to get that time you get it, and be glad you did it. There’s so many people – millions and millions – who never get the chance to do it, so be proud. What’s great about metal is that they don’t play it on the radio or jam it down your throat, but our fans are the most loyal. If you love metal, you love it forever. That’s what keeps us going.

Dead Rhetoric: If we’re still around the early 90’s, the Force of Habit album, do you see it as your big missed opportunity with Exodus given it was released on Capitol?

Souza: I think that album we made mistakes on that record, but don’t get me wrong, there are songs on that record I love to death. I think with that record, it was like, “We better write a hit record boys, or we’re going to be working at the Chrysler plant!” Capitol kept coming to us: “We need something to market you guys on. Everything on Impact was too heavy.”

Dead Rhetoric: Isn’t there an Elvis Costello cover (“Pump it Up”) on the album?

Souza: Oh God. Again, there are songs on that record we should have never done. Even songs we wrote – there are some I’m not too proud of.

Dead Rhetoric: You made some comments about a year ago – maybe in jest or not – to Gary [Holt], that you’d jump back in the band if given the chance….

Dead Rhetoric: That’s why I found it to be interesting. Since 2010, you’ve been putting all of this work into Hatriot, but with Exodus, that will always be Gary’s band.

Dead Rhetoric: Are you still on good terms with those guys?

Souza: Two weeks ago in Oakland, Robb Flynn had a benefit show for someone who had an accident. I have an AC/DC tribute band called AC/DZ, I opened the show. Gary was there that night. We had a great conversation and talked very well, and it was awesome. It was awesome, and that’s the way it needs to be. Believe me, I do read the press, so I know. It was late that night and we talked about a lot of stuff, and it was cool. He said, “I heard you were here and I was looking for you.” I don’t have a problem with anybody. I’m good with everybody. I get along with everybody and don’t have anything bad to say.