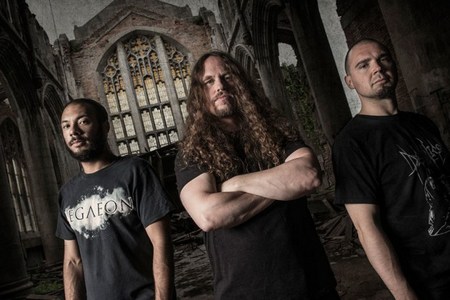 Dead Rhetoric: Being around for as long as you have – is it strange, with either the band name itself or you, in terms of the production end, being seen as a selling point?

Rutan: It is. When I see my name on a sticker on an album I produced, it’s still crazy. I’m just a modest dude from Jersey that ended up making two really awesome careers out of making music and producing, so when I see things like that, it’s still a weird feeling. Even when I talk to fans every night, I talk to people, and it’s people that I have been seeing for two decades – I just see myself as one of the guys I guess. I don’t look at myself in the way that other people view me. Just in the last six months, I got a feature in Mix Magazine, which was a huge thing for me. I’ve been reading it for 25 years since I went to school in New York City for audio engineering. I had my Guitar World feature…these are things that I probably wouldn’t have thought could happen 25 years ago.

I never take anything for granted. Things have changed a lot obviously, but I feel very grateful and still humbled by the fact that people view me as who I am or what I do, in regards to Ripping Corpse or Morbid Angel or Hate Eternal, or producing. I don’t think it will ever really settle in. Some of the things that I hear from people. On the last few tours, I’ve had some really intense meetings with people that have had really hard times in their life and have cited me as inspiration to them to make it through, through my music. I’m kind of a guy that wears everything on my sleeves. I don’t have anything to hide. I’m a straight and to-the-point kind of person. It’s pretty neat to think that I have been able to inspire people through hard times by my own life experiences and my music, and that’s something you can’t even put a price tag on.

Dead Rhetoric: That’s again, a good way of looking at it. Staying humble as opposed to soaking it all in and basking in it.

Rutan: There’s times for sure – at the studio I recently framed my Mix Magazine article, Guitar World article, and the Decibel top 20 death metal guitarist feature all in one area of the studio. Amongst that is a bunch of records I’ve done. It’s one of those moments when you give yourself a half a pat or a high-five to yourself – you know, “good job dude.” But at the same time, it’s like…alright what’s next? I don’t sit around on my laurels I guess. I’ve always been a person who has found it hard to be satisfied with anything. It wasn’t until I hit my 40s until I could reflect back on my career and give myself a little bit of credit. I’ve been doing music, between producing and recording full-time, for 20 years now. It’s okay to feel a bit good about it. Hence leading back to what I was saying before.

Growing up, I had a lot of things happen in my life that really challenged me as a youth. When I became an adult, it was like a whole new story for me trying to combat the past and my childhood to furthering myself. I used music as a vessel to improve my life and made something out of myself. It took me a long time to get to the point where I reflect on things and be “good with it.” I’m good with what I’ve accomplished, but I feel like I have a lot more to offer still. But it’s a good feeling to be able to reflect and acknowledge – 30 years ago I could have only hoped that I would achieve so much. Even playing in Morbid Angel for all those years, it was such an amazing piece of my life, and Ripping Corpse…my first band. Now Hate Eternal for 20 years, and the studio – being able to produce all the great bands I have. Being fortunate to having the opportunity to do so. I can’t find any complaints, not right now.

Dead Rhetoric: Again with that longevity – when you see a band like yourself, or Morbid Angel, or Cannibal Corpse – what is it about those bands that have been able to stick around, where some bands hang around for a few years and fall by the wayside?

Rutan: I think that part of it is the passion, and having the integrity and your heart in the right place. To me, when I think about Cannibal Corpse or Morbid Angel or Hate Eternal, we were always driven to create music that pushed the boundaries of what was possible and never look back. Music for me personally, is so much more than just a hobby. It was always my lifeblood. It was my escape, per say, to help get my life together. I really put everything I had into music. I remember as a teenager – I was playing Ripping Corpse when I was 17 and in high school. I would be asked by teachers and other people about what I wanted to do with my life. I’d always say, I want to tour the world, to have my own band some day and be known, and to be a great guitar player with my own style, and have a studio. But people would say “yeah, but what do you really want to do?” “That’s a pipe dream” – so many people told me it was not possible. Except for my mom – she was so supportive of everything I did. So many people want to tear down your dreams, and I used that to my advantage.

I’m so damn stubborn – you tell me that and it has the opposite effect. I’ve used it as fuel for the fire for all these years. When people would say, “get a real job” or “you’re dreaming” – I’ve heard it all. Just on basic integrity and stubbornness, I knew I would get somewhere. I wasn’t going to stop until I did. I just never realized how much I would be able to achieve. It’s hard enough to make it at one career, but for me to make two careers out of music with both producing and playing – it’s been an awesome ride. It’s been a lot of hard work, with a lot of ups and downs, but worth every second of it.

Dead Rhetoric: Once you are done with the US tour, you are heading over to Europe. Do you have anything planned out yet or is it still tentative right now?

Rutan: We are trying to work on a tour for the end of the year. Nothing has solidified yet, but it’s in the works. We haven’t been to Europe in quite some time and we need to get back there. Obviously it’s so much easier to tour the States since we are here. But I love touring Europe and we have some great fans. I have such great memories of touring Europe, so we are really looking forward to getting back there.