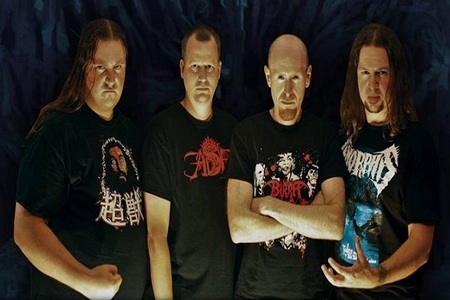 When one thinks of heavy metal and Canada, the two seem synonymous with death metal. Sure there are notable exceptions to the rule (aren’t there always) but it’s not a stretch to think immediately about bands like Cryptopsy, Kataklysm, and even Neuraxis. Enter Nova Scotia’s Hate Division, whose latest album, Order of the Enslaved, should make you equally pleased if those earlier bands are what you think of when it comes to Canada.

Technically interesting yet memorable, Order of the Enslaved is an album that is bound to elevate Hate Division’s status among the death metal elite. DR was lucky enough to grab bassist Paul Shaw and drummer Shane Forsyth to get caught up to speed on the new album, the Nova Scotia metal scene, and more…

Dead Rhetoric: The name Hate Division seems straightforward enough, but where did the idea come from for the band name?

Shane Forsyth: Paul (being the huge Nasum fan that he is) was originally going to use the name for a grindcore side project back in 06-07. After our band at the time split up, we needed a new name so we decided to use Hate Division. The name implies how hate can divide us all.

Paul Shaw: Well I can tell you that we all listen to a wide variety of extreme music, but some of the bands that we all really enjoy and had an impact on our writing for Order of the Enslaved would be: Origin, Misery Index, Dying Fetus, Man Must Die and Suffocation.

For me personally during the writing for the album I was taking inspiration from the underground bands like Mass Infection, Hideous Deformity and Gorgasm. There are some really incredible bands that are lurking just beneath the radar of the bigger death metal labels so make sure to check out those bands I listed above!

Dead Rhetoric: It’s been three years since Strategy of Obsolescence was released. What has the band been up to since then?

Forsyth: We’ve pretty much spent that last few years jamming, writing and recording Order of the Enslaved. We really wanted to take our time with this one and produce a well-rounded and good sounding record. We dedicated a lot of jam sessions to mapping out and fine tuning every aspect of every song. The recording process took a lot of time mainly because it was done home studio style. We scrutinized every single take to make sure it sounded tight and organic. Over all we’re really happy with how it turned out!

Dead Rhetoric: Order of the Enslaved is your second full-length release. How does the material differ from Strategy of Obsolescence?

Shaw: The material on Order of the Enslaved is an evolution from what we wrote for Strategy. We find it has a more focused and death metal approach as opposed to Strategy which had a completely raw death grind feel. When we were done recording the first album we literally had nothing, and just started jamming and putting together ideas. We really didn’t limit ourselves for this one; if someone had a good riff or section written we would jam it out and then see what else could work with it. We all bring ideas and songs to the table so it’s a full group effort in the writing process. A lot of material on this album would never have seen the light of day if we went into it thinking we would write Strategy Part 2.

Dead Rhetoric: The artwork of Order of the Enslaved is phenomenal. What was the artwork meant to portray?

Forsyth: Thanks! We absolutely love it as well. Ken Sarafin did an amazing job. He is a really talented artist and total pro to work with. Basically we gave him the lyrics to the title track as a base and he came up with the concept. The statue in the center symbolizes total subservience and control. The faceless icon that holds the globe in its grasp to be worshipped by the slaves. To me it looks like the statue is all that is left from the old world after the end of civilization. The slaves bow to it as that’s all they know how to do anymore.

Dead Rhetoric: Is there a particular song on Order of the Enslaved that really sums up what Hate Division are all about?

Shaw: It’s really hard to pick one that defines us as a band as we really enjoy all the material we wrote. If I had to pick one though it would have to be “Order of the Enslaved” as it has a lot of different elements to it, flows really well and is a blast to play live!

Dead Rhetoric: There seems to be a nice blend of death metal related influences that come together with your music. Is there a trick to getting it all to mesh when you are mixing the technical with the melodic or the death metal with the grindcore?

Forsyth: No trick per se but all of us do contribute to the writing process. It’s not always easy but it enables us to bring some different styles to the table. For this album we really wanted to add some new elements and do some things that we’ve never done before. Strategy and our first EP had that mesh of styles but Order took it to the next level.

Shaw: Well there is a metal scene in Halifax, NS which is the main city. We live in New Glasgow which is about 1.5 hours outside of the city so it’s difficult to play live, throw in that our singer lives in another province and it really becomes challenging. When we talk about a scene here we usually talk about it as “Maritime Metal” which encompasses 4 provinces – Nova Scotia, New Brunswick, PEI and Newfoundland. On a side note, if any larger bands are reading this please remember to take your tour east of Quebec. We are really neglected for touring bands…

Dead Rhetoric: The Canadian death metal scene is usually one that is looked at in regards to technicality. Is there something up in the north that brings about such an attention to technical prowess?

Forsyth: It’s hard to say but Canadians do seem to take a little different approach to writing music. I find there is often an underlying kind of signature sound in metal from Canada. Kind of hard to explain but it is recognizable at times. When I first heard the band Anciients I thought “these guys sound like they’re from Canada”.

Dead Rhetoric: What’s on tap for Hate Division now that Order of the Enslaved has been released?

Shaw: We just played 3 shows in July to support the new album and give people a chance to see us live as this is something we have not done in a long time. The shows were fun and people seemed to really enjoy the new songs in a live environment!

We haven’t really discussed writing another album at this point mainly because we spent a lot of time writing, rehearsing and recording Order of the Enslaved. The band is a lot of fun; we treat it as a hobby and write the music for ourselves. We consider it a bonus if people dig what we are doing! You will hear more from us at some point, we just can’t pinpoint when that will be. Our drummer Shane did a play through of one of the tracks from the album and we will post that soon, so keep your eyes peeled for that.